Derby: It makes you wanna puke 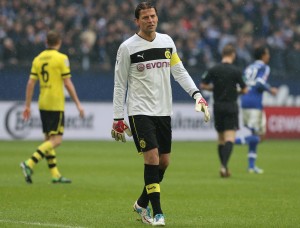 All in all a terrible Saturday: Standing in the rain in Germany’s ugliest town. Getting our black’n’yellow arses kicked by our bitter rival for the second time this season. Marcel Schmelzer described it best after the match: “It makes you wanna puke!” This derby gave the impression that our team did not think that this was a big match. They wanted to win it with 80% and if you try that you lose. It’s that simple. For us fans who are confronted with blue scum in our everyday life, this is the most important match of the season. Last week we tried to remind the team after the Donezk match was decided, but obviously the team did not listen.

Years ago I swore to myself that the blue scum would not see any more money of me so I started to boycott the away derbies. Yesterday I broke that promise for the first time and oh how I regret it. So I started to Dortmund’s main station around noon to take the extra train to Gelsenkirchen. As usual the derby draws a lot of BVB fans, you don’t see all that often at away games and some of them you would rather not see at all. The aging hools had fished their 80’s casual clothes out of the back of their wardrobes and along they brought a lot of youngsters who seemed eager to follow in their footsteps. The derby is always the best opportunity for these people to look for adventures. The bad thing is that it is hard to dissociate from these people if you are caged with them by police. 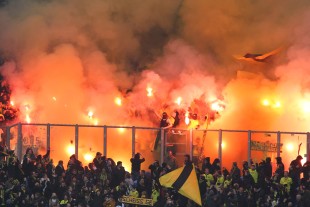 After reaching Gelsenkirchen the usual fun started. Standing in the rain back of the main station, guarded by riot police, no toilets around, so fans have to piss on the walls in public. Treat people like animals and they will behave like animals. Then the busses to the birdcage arrive and you get a sightseeing tour around Germany’s capital of ugliness. Dortmund has its less beautiful areas as well and I know they don’t have any money in Gelsenkirchen, but driving through this town you get the impression that they have a law against any architectural design. Probably the neighbours would burn down any beautiful houses right away, because they would make the rest of the town look even worse.

After reaching the eyesore at the A1 we took the time to strengthen us with a couple of fan beverages before we entered the guest standing area. To make the caging experience complete this cake slice of the GE-gym is surrounded by Plexiglas windows so you really get a good impression of how zoo animals must feel every day. The BVB supporters demonstrated their motivation with a nice pyro show when the teams entered the pitch. I am no big fan of pyrotechnic in football stadiums, because of the health risks. But even I have to admit that it looks nice when it is done right. And other than the wee sparkler show-off that the blue scum had presented on their last visit to the Westfalen temple the Dortmund Ultras had a proper show prepared. So on the terraces the atmosphere was as it is supposed to be in a derby. 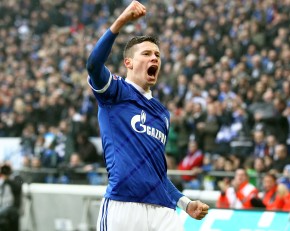 Nobody knows why none of that was enough to wake up our team. Again it is time to quote straight-talker Marcel Schmelzer: “What we did in half one makes you wanna puke. We slept through the complete half and made Gelsenkirchen strong.” There is not much more to be said about half one. Dortmunder Jung Kevin Großkreutz, who hates the blue scum as much as any Borussia fan, had a terrible derby day once more. Somehow his emotions seem to hinder him from performing in derbies. Marcel Schmelzer found himself alone against two opponents most of the time and it was no big surprise that both of Gelsenkirchen’s goals where set up over our left wing.

Both of the times it was Uchida who delivered the ball into our box. His first cross was converted by Draxler with a strong volley shot into the long corner. Hummels who returned after a flu had knocked him out for almost two weeks and sported his new black’n’yellow boots had left Draxler with too much space in our box. At Goal number two Huntelaar profited from the fact that Subotic was fast asleep and therefore did not realize how the Dutchman made some steps into the wide open behind him. Roman Weidenfeller was powerless against both goals. All in all our glovesman was the best Borusse on the pitch and that says a lot.

On the few occasions BVB appeared in offence during the first half Götze shot the ball anywhere but on target. It was obvious that Jürgen Klopp had to react at halftime. It did not come as a surprise that Großkreutz had to go and was substituted by Reus. The same goes for the replacement of the weak Hummels. But as the teams walked back onto the pitch it wasn’t Santana who took his place but Nuri Sahin. Sven Bender moved back into the central defence. With a 45 minute delay Borussia started the derby for real. Suddenly the Blues where in reverse gear. 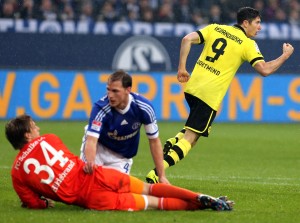 But Gelsenkirchen remained dangerous through counter-attacks and once again it was Weidenfeller who had to prevent the game from being decided prematurely. In one of his rare good moments Kuba played a brilliant pass through the Gelsenkirchen defence which found his compatriot Lewandowski wide open. The goal-getter bitten by wanderlust made what he is best at and converted this big chance. Since the Blues failed to convert any of their counterattacks for the decisive third goal Lewandowski could have gotten us an undeserved draw three minutes before the end. This time he hit keeper Hildebrand with his shot instead of the net.

The Dortmund supporters had to endure the malice of the ugly Blues and travelled back to beer city in anger. It is bad to lose the derby. But it is inexcusable to lose the derby because you did not enter the match in the fighting spirit it requires. Our team has blessed us with so many great moments in the last couple of years so it is hard to criticize them. They have earned an almost unlimited credit by us fans. But to show your two weakest performances of the season in the two most important matches is something that can not be taken lightly. The so-called “hottest team in Europe” has proven that they may be hot in Champions League but in the all-important Bundesliga we only hold on to the 2nd spot because of the weakness of Leverkusen. The team must realize that you have to earn the festivities during the week on the weekends. And they better prove against Freiburg next week that they have understood this. 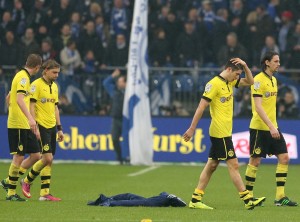 Substitutions: 54. Pukki for Huntelaar, 72. Fuchs for Matip, 82. Raffael for Draxler - 46. Sahin and Reus for Hummels and Großkreutz, 76. Leitner for Gündogan 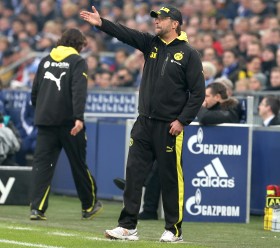 Jürgen Klopp: The loss was well deserved even though it feels unnecessary. We had a lot of good moments in this match but only after Gelsenkirchen had taken the lead. The first half was not good. We made tactical errors in the defence. We had to take some crosses from the left. Julian (Draxler) takes the first ball fantastic and Klaas-Jan Huntelaar converts that ball on any day of the week. When we played proper football we were dangerous in offence but we did not take our chances. The most important statistic today is that Gelsenkirchen did not only shoot more often but they also got more shots on target. But nonetheless our second half was really good. We made some changes and after that we looked really good. Our goal was well deserved. We played it calm despite the result. That was good by the team. With Gelsenkirchen’s first counter-attack the game got hectic. In the end we threw everything up front and Gelsenkirchen had big chances to counter but that’s normal. We had the huge chance by Robert Lewandowski so it would not have been unjustly if we had gotten the draw.

Marcel Schmelzer: What we did in half one makes you wanna puke. We slept through the complete half and made Gelsenkirchen strong. In half two you could see that they don’t have any more means but counter-attacks. It’s our own fault. We played stupid today and got punished for that. It’s not about attitude but you have to be focused on the match and that’s hard if not all eleven are 100% there right from the start with their heads. We played horrible in both derbies and we have to apologize to our fans for that.