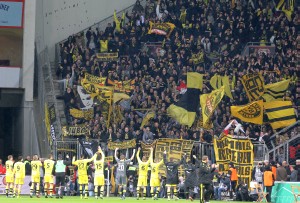 5 Goals, 2 penalties and a fast paced offensive was delivered by the two Champions-League-Aspirants who showed once more why they are at the top of the table of the German Bundesliga. Moaners would say that the game was mostly defined by the sloppy defense of Leverkusen in the first and Dortmund in the second half of the game, but after all, these two Teams define themselves by aggressive and offensive play. Marco Reus in the third minute and Jakub Blaszczykowski in the ninth, with a penalty, were leading Dortmund to a supposed easy way to win the match. But Stefan Reinhartz from Leverkusen didn’t want to play that game and scored 2 goals in quick succession (58./62.), but a swift return of the lead for Borussia was made possible by Robert Lewandowski (63.) with his thirteen’s goal. Even a failed penalty shot by Kuba, which was saved by Bernd Leno, was not enough to turn the tide for Bayer Leverkusen.

The game did not start with a good fortune as Robert Weidenfeller had to pass, because of rather bad flu. The young Mitchell Langerak (24) did take his place instead and played his fourth game for Dortmund and claimed his fourth win. The only other change, compared to the last game, was that Sven “Manni” Bender was placed by Jürgen Klopp in the starting eleven for Sebastian Kehl and did therefore create a rather interesting duel of the two Bender brothers as the other of the two, Lars Bender, is a constant starter of Bayer Leverkusen. The just mentioned Langerak had to nearly prove himself quite early in the game as Gonzalo Castro was beautifully put in a good shooting spot by Simon Rolfes, but placed his lob fairly wide in the first minute of the game. 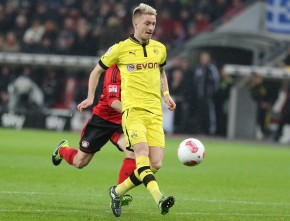 On the other side Marco Reus showed Castro how to do it right and scored an excellent goal with a lob himself, after a well-placed chip pass by Lewandowski, who proved in this game time and again why not only scoring is important as a center-forward. The two Teams kept at their fast paced play style and created a lot of scoring opportunities. And it was again Castro who had a great chance for Leverkusen but missed it again by hitting the air, instead of the ball. Lewandowski on the other side was send running by a well-placed pass of Mario Götze and could only be stopped with a foul from Bernd Leno inside the penalty-area who correctly got the yellow and not the red card for it as well. Kuba left Leno no chance and scored another penalty goal in this second half of the season. But the 2:0 lead for Borussia Dortmund was no reason for them to stop being aggressive, when Bayer was circulating the ball, and looking for another third goal. The defense of Leverkusen was way over their head in this period of the game and could only watch how Dortmund passed the ball between them at a quick pace.

We do not know what Sami Hyypiä told his player in the half-time-pause, but it must have triggered something as Bayer Leverkusen came out with an even quicker pace and was even more aggressive than before, which is normally seen by our Boys of Borussia after Klopp is finished with them in the half-time-pause. What followed was not “so good defending” with a lot of last resort saves on the line and a great Mitch Langerak who showed once more why he is our Back-up for Weidenfeller as he parried shots in a terrific way against Sidney Sam, who replaced Simon Rolfes, as well as André Schürrle in the first 5 minutes of the second half. 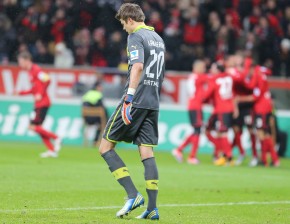 It did take nearly 60 minutes to beat Langerak and his defense. Dortmund tried to free themselves with a long ball out of the penalty area which was intercepted by Carvajal. The defender passed the ball along to Stefan Kießling who quite brilliantly passed the ball further to Stefan Reinhartz who only had to put his foot in to press the ball over the line. It was again Reinhartz who scored 4 minutes later, after receiving the ball from Boenisch, this time with a header who left Langerak not the slightest chance.

Virtually directly after that Dortmund stroke back in form of Robert Lewandowski and his thirteen’s goal in the Fussball Bundesliga. Wollscheid, set under pressure by Reus and Götze, made a sloppy return pass to Leno which was intercepted by Mario, who then passed the ball into the middle of the penalty area where Lewandowski, 1 foot faster than his opponent, kicked the ball over the line. After that Dortmund got a second penalty adjudicated by referee Deniz Aytekin, who made a real good job on this day. Sebastian Boenisch brought Lewandowski down on the edge of the penalty area with a real poor foul. Blaszczykowski took the shot again, but in good old Borussia Dortmund tradition, failed to score with a weak kicked ball, which was saved by Bernd Leno. 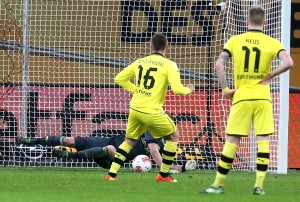 Luckily Leverkusen could not take advantage of this and so the third win of the second half of the season was accomplished by Borussia and the second place in the Bundesliga was taken over. Even though Bayer deserved one point after a splendid second half and we got quite a lot of luck, these are the games one has to win to stand second in this season as Bayern Munich is already out of reach. So let’s wipe our mouths and bring on Shaktar Donenzk in the Champions-League and Hamburger SV in the Bundesliga. Dortmund is definitely ready for it.