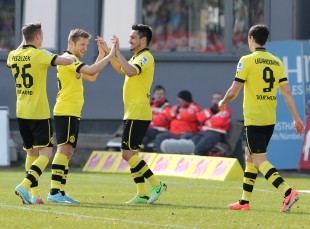 On Tuesday, the racism-terrorists from Malaga surrendered after a vicious fight. On Friday, the guerilla fighters of Madrid announced that they will pick up the fight again and end the ceasefire after they had laid down their arms half a year ago. To counter these recent conflicts and in line with the most prominent supporter of any Bundesliga club, Henry Kissinger, a peace summit was supposed to be held in Fürth today. It’s meaning was to show that there can be a world of peace and friendly co-existing. There was a selection from Dortmund sent to Fürth. On board were the minister for foreign affairs, Weidenfeller, the German minister of Defence, Hummels, accompanied by the Brazilian ambassador Santana. (The party leader and assistant of Hummels, Subotic, was unavailable because he was attending a symposium for health prevention). Also in Fürth were the secretary of Homeland Security, Grosskreutz, the Polish minister of Defence, Piszczek, the German minister of Education, Kehl, the Turkish minister of Construction, Sahin, the German minister of Culture, Gündogan, the German minister of Development, Götze, the Polish prime minister, Blaszczykowski, and his minister of Warfare, Lewandowski. Further, there were around 5`500 spectators accompanying this selection. The Portuguese minister of Sports was also attending the meeting as a spectator, on behalf of the Royals of Spain.

The summit started quite furiously as some of the ministers seemingly didn`t understand the purpose of it and tried to fire away. The Dortmund delegation were in complete control of the meeting and didn’t let the Fürth selection participate at all. Especially the Polish prime minister was in quite a rage and initiated the shooting which overshadowed the first half of the meeting. After his first attack, it was the German minister of Development who opened the shoot-out in minute 12 after the minister of Education had offended the delegation of Fürth. 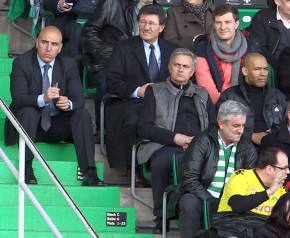 The peace was disturbed and one was awaiting a wild backfire from the South German selection. However, it was still the Dortmund ministers provoking disturbance. Only three minutes after the first shot, another one was fired, jeopardizing the goal of the meeting. It was this time Gündogan who had shot after yet another attack by Blaszczykowski. And the prime minister rumbled on. After 29 minutes, he himself fired the next shot after a complicated back and forth involving multiple ministers, including Götze and Lewandowski. The minister of Warfare almost had shot himself, but was saved by the vice-minister of Green and Environment of the delegation of Fürth. One could clearly see that his purpose as the minister of Warfare was not in line with the goal of the meeting, he wanted to create disturbance and destroy the peace. But he was not the only one. Another four minutes later the next shot had already been fired and hit its target violently. It was again the minister of Culture after an attack initiated again by Blaszczykowski. It was all those crosses that caused the trouble. (Religion usually doesn’t help peace...) The last shot of the first half came from Götze. He fired from distance after he had prepared the shot for quite some time, helped by the secretary of Homeland Security. The chairman tried to cool down the atmosphere and suspended the meeting for 15 minutes. 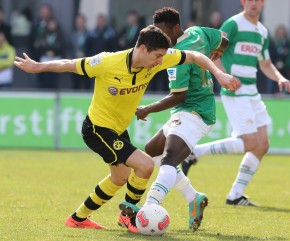 After this break, everybody seemed to have calmed and finally one could come to the actual purpose of the meeting: a friendly co-existing. The president of the Dortmund selection had decided to bring some peace by taking out one of the trouble makers, Götze, and replacing him with Bittencourt, officer of Culture in Brazil. Later on, he also replaced the minister of Education with the officer for Building and Manufacture, Schieber and finally also Gündogan with the Austrian minister of Sub-Culture, Leitner. As the delegation of Fürth had been the only ones caring about the goals of the meeting and with the Dortmund delegation finally also committing to it, peace was achieved and the two delegations were actually showing how unanimously the world can be. And then, out of a sudden, the Fürth selection finally fired back. Nobody anticipated that, it came out of the blue, but it didn’t disturb the quiet for long. However, the Polish minister of Warfare was aroused by the fact that he – as the minister of Warfare – was now one of the only ones who hadn’t been allowed to shoot and he violently attacked again. One could see that he didn’t want to leave the meeting without having had a shot himself. He was assisted by the Polish minister of Defence, who hadn’t been really defensive today, and the prime minister who still was far from agreeing with the peace. After another cross 10 minutes before the end, Lewandowski finally got his shot. He hardly did anything to it, but one could see his joy to have been able to score one himself. The attendance who had been a quite beautiful background to the meeting, was heard even more in the last minutes, creating a peaceful summer atmosphere. In the arena, the rest of the meeting passed in quiet peace and all pacifists could watch it relieved. 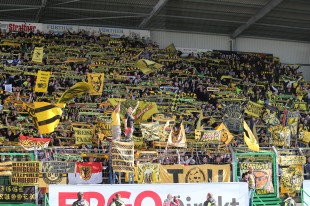 What do we learn from this summit? First, it showed that Fürth is the ideal place for a peace summit. However, I strongly doubt that any of the Fürth pacifists would be of any help in a war. They couldn’t proof to be great warriors, even fighting for peace seemed to overburden them. Another thing that showed was that peace meetings don’t have to be boring, if there’s enough joy and fun to gain from attacking and disturbing peace by any means. And the last thing we learned from it: football is war, not peace. Time to get a Real opponent and go back to the fight!

Come on, black and yellow!!!