Schieber scores 2 Goals against Augsburg ? Yes, this is Bundesliga! 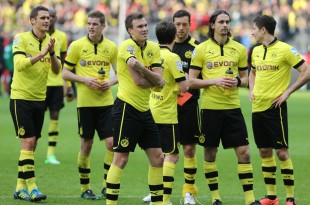 2 Goals scored by Schieber (22./ 52. minute), 1 by Subotic (64.) and 1 by Lewandowski (90. +2) where needed to beat a courageous Club from Augsburg, which scored 2 Goals in quit succession by Daniel Baier (43.) and Kevin Vogt (44.). To describe the Game one could easily just quote Jürgen Klopp after the match: "The boys did really well in the first half an hour. Then we lost a bit of our clarity. We intoxicated ourselves too much by our own game without getting into the zone where we could score goals. The equalizer came out of nowhere and the second goal may never ever be scored that way. That's something were we can give new impulses... however, we deserved this win. It was a pleasure to watch the boys. It was a bit more intense that one could need it to be."

So what had happened? Jürgen Klopp changed our starting eleven on at least 7 positions to grant players like Bittencourt, Leitner, Schieber and even Hofmann, the latter stood in the starting eleven for the first time ever in the Fussball Bundesliga, the chance to prove themselves. Even though I don't like the idea and the talk of other sportswriters that a rather better B-Elven of Dortmund played against Augsburg, even I must admit that when players like Götze, Reus and Lewandowski only sit on the bench, the trainer really let play a B-Eleven. Our starting team never played together in this constellation, but did fairly well in the first thirty to forty minutes. They didn't over pace it and they controlled the ball and the opponents by circulating the ball quite nicely. 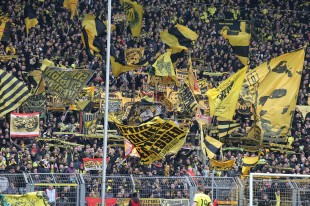 The first goal by Schieber in the twenty-second minute, even though it was served quite luckily by Bittencourt, was therefore only a matter of time. After that our yellow boys were readily waiting for Augsburg to open up to give space for counterattacks. The only blame one can give them is that they didn't force their second goal to decide this match. And as Jürgen Klopp said, the equalizer came out of nowhere, but it happened. A corner-kick for Augsburg was cleared by Schieber directly into the arms of Baier who took the Ball volley and scored, one must admit, a beautiful goal. Langerak, one of the many replacements, didn't have a chance to catch this ball. What then happened is only to be explained when we consider the young age and the new formation of our team. A long ball from Daniel Baier into our Half found a lonesome Player of the FCA, namely Tobias Werner who took the shot from the left penalty area. Langerak parried the ball into the middle where another Augsburg player, Vogt, was left alone and had an easy time to put the ball into the net, 80 seconds and we were suddenly 1:2 behind. Halftime.

In the second half Jürgen Klopp made a double switch. Robert and Mario replaced Leitner and Bittencourt, both of who played good but especially Leitner has to show us more to arise into the back-up, we all hope he can someday be. Especially when we see how Götze and Lewandowski turned the tide of the game for us in a way that every Dortmund fan must feel great. 20 seconds were enough for Lewandowski to pass a wonderful ball between 3 Augsburg defenders directly into the feet of Jonas Hofmann who unselfishly passed the ball across to Julian Schieber who had an easy time scoring his second goal.
But Augsburg didn't give up; they came forward just minutes later in the name of Movarek. He was left completely alone by a positional error of Schmelzer and headed for goal. He even made it passed Langerak but failed to score the goal from a tight angle and so Großkreutz fished the weak kicked ball of the line in the last second. 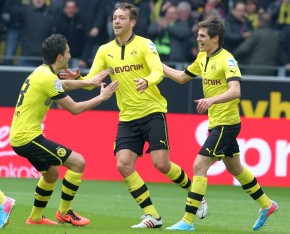 From then on our Boys created more chances. It was a free-kick by Mario Götze which did let Subotic make the goal in the sixty-fourth minute. Lewandowski scored an irregular goal, because he was standing off-side, a really close decision. In the eighty-fifth Minute Mario Götze had the chance to decide the game for us, but failed miserably at close distance, even though he was put perfectly in place by Hofmann.
It did hurt to see him fail to score again, because of the match in Malaga, but even more so, because Augsburg was still fighting like crazy and one could never be sure about this game, we had to make this fourth goal. It was Lewandowski who finally delivered that goal in the ninety-second minute which was served for him by Mario Götze.

At the end we won, we did consolidate our second place in the Bundesliga and we did preserve some greatly needed players, power and concentration for the upcoming match on Tuesday against Malaga. One last word, I especially want to credit the 20 year old Jonas Hofmann, who made his first start-up appearance for us and made his first assist in his career in 1.Bundesliga. He showed some promising performance and was the best of the three rookies (Bittencourt, Leitner and Hofmann) on that day. Overall we, the black yellows, can look into a bright future with young players like these that are yet to rise to their best.

Subs: Götze and Lewandowski for Leitner and Bittencourt (52nd), Kehl for Schieber (83rd)