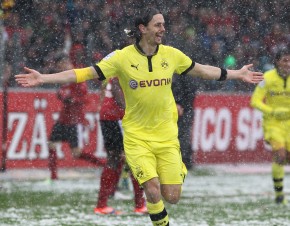 After an exciting week full of emotional moments in the two top-matches against Donetsk in the Championsleague and against Schalke in the national competition, which caused completely different feelings, our next task is already waiting. Borussia Dortmund faces the SC Freiburg on Saturday, 3.30 pm CET in our Westfalenstadion. After the unsatisfying performance in the forbidden town our team is willing to offer a brilliant show to the crow of black yellow supporters in this temple of football with a (hopefully) happy ending.

First of all, a short look at the statistics gives a vague impression of what the game could be like. In all 27 matches between the two clubs in the League 16 victories for Borussia were achieved and only three times there was a negative result for us. Borussia’s dominance becomes even more outstanding regarding the home matches: In only one of them our team left the field as the looser.If you would make up your expectation on the base of these facts you may believe that the SC will cause no serious problem for us, but it also has to be taken into consideration that the BVB won only 5 out of the last 10 matches this season and furthermore the opposing team from the Breisgau got even less goals against than we did (BVB:30, SC:28). Of course, standing on place 2 we are described as the favourite but Freiburg’s potential should not be underestimated as they own the 8th place in the table and have only 10 points less than 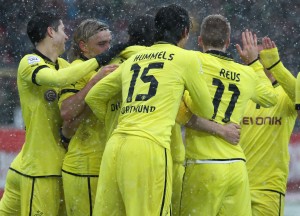 Dortmund (BVB:46, SC:36). Therefore they are hungry to win more counters so they can dream of a qualification for the international competition.

A win against Freiburg would be a chance to reconcile with some discontent supporters who reproach Borussia’s players a lack of passion and motivation in the Derby.We do not know what Klopp’s strategy to succeed will be but as Hummels has serious injuries Santana is expected to come back into the line-up. In addition, Kehl’s cannot play with his cracked rib and therefore Sahin could take in his position next to Gündogan, because also Sven Bender is still questionable suffering from a cold. It would be an ideal point of time for Sahin to present his regained strength and power, which he had for example shown in his last complete match against Freiburg on the 13th day of the season 2010/11, where he was the leading and dominant player ( kicker mark: 1,5) in our team and helped the BVB to win with 2:1. I guess everybody would be pleased to see this happen again. But there are even more unanswered questions mounting as it cannot be said yet whether Kuba and Schmelzer 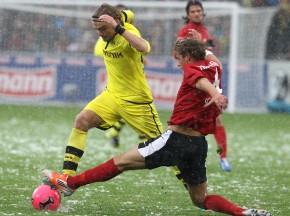 can perform on the field or not, but least a participation is still possible. In Streich’s team his very important player Makiadi is missing injured.

Apart from the fact that a win for Borussia is always a good thing, it would be possible to enlarge the lead over Leverkusen. Bayer would have to success over the alleged ‘high-flyer’-team from Munich to stay in contact with us. But the condition for a 4-pont-distance to Leverkusen is a victorius home match against Freiburg. How do we achieve that? With passion. Everything else will follow automatically.