Time for a break! 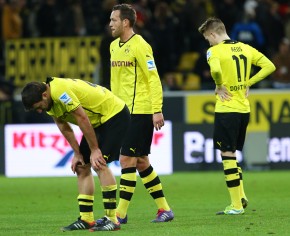 We have Tuesday today. For many of us it is the day of Christmas Eve…for others it is an ordinary day during the week. But for all of us it is three days after the game against Hertha. Now, I could tell you something about the game. I could tell you how thrilled I was about that perfect pass from Kehl onto Reus, who used it brilliantly to score the 1:0 for us. I could tell you how pleased I was with the start of the game and how I assumed that it would stay this way. I could also tell you about those unlucky mistakes that our Youngsters Durm and Sarr made that lead to the equalizer and the leader for Hertha. Moreover, we could discuss the lack of passion and drive, ambition and effort, heart and soul that most of our team presented on this past Saturday. But three days later I do not feel like any of that anymore. I was angry on Saturday. More than that. I was truly disappointed in our team. For the first time in a very long time actually. And I believe that I am not the only one who felt that way. But three days later I have realized how lucky we all are, and how close to perfect this year had been. 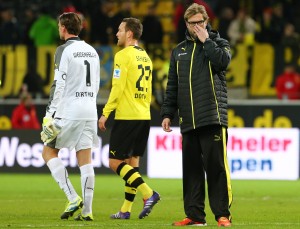 We have had our ups and down for sure. I would love to forget about that unfortunate defeat against Munich in the Cup Quarterfinals in February, about that really stupid defeat against Hoffenheim at home on the last matchday of the previous season. I remember the tears I cried after 90+ minutes in the Championsleague Final against a truly strong team from Munich. But I always remember those nerve-wracking last minutes against Malaga, the Lewandowski-parade against Madrid and for and upmost definitely those last six minutes in Madrid that I spend on one seat of Bernabeu, my head in my hands because I just could not stand to watch this game anymore. And those tears of joy after the game. A black and yellow London, an ironic start into a new CL season in Italy, a tough fight in London- and let’s never forget that shot of Kevin against Marseille.

I could go on and on about all those memories I have from the past years. Disappointment about players who left or intend to leave, joy about new players that support our team in the best way they can…players that have come throughout the years, that are still here and try their best even though some have already written them off months or years ago, there is so much to this Ballspielverein. 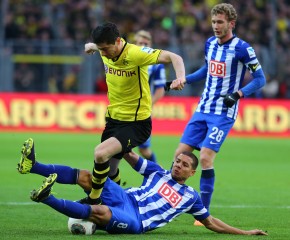 And it makes me realize how ridiculous it is to be angry about a defeat against Hertha at home. It was an annoying game, for sure. And we have had annoying games before that as well. But let’s look at this from another angle: our players need a break. Our players deserve a break. Maybe some of them have a motivation problem at the moment, maybe some of them simply lack the creativity that would have been necessary the past games due to the “overload- modus” they have played the past few months. We have had a hell of a time for such a long time now. It even feels right to be frustrated at times again. It makes you realize that none of what we have experienced is to be taken for granted. That all of this has been hard work, that at times you fail (also as fans) and at times you succeed in the most brilliant way. It is what we love about our Ballspielverein!

The distance between luck and bad luck seemed not that far in these days. It is something we might have to get used to. If someone asked us what this year has taught us, we would probably answer: Remember your roots and never forget which situations we (Borussia Dortmund) have already been come through.

Let us all enjoy the winter break and attack again in the new year! I am sure our Ballspielverein will find a way to make us happy again!

On behalf of the editors, we would like to wish you a Merry Christmas and a great New Year’s Eve with a cracking year to follow!