Son of a bitch 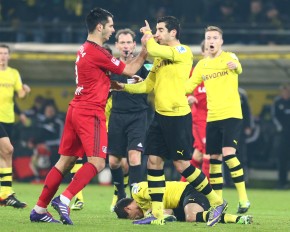 A strong squad from Leverkusen, a lot of emotions, one goal, two red cards und two injured players on our side. The top match of matchday 15 had a lot to offer, it was however a game to forget for our Borussia. Bayer defeated Dortmund with 1-0 and thereby established itself as Munich hunter number one. Dortmund on the other side lost valuable points against a direct contender in the race for the Champions League starting places. Now there are 3 days left to quickly lick wounds and summon 11 healthy and encouraged Borussians for the deciding Champions League match in Marseille.

Juergen Klopp gave some players a warmly welcomed break during the national cup game against Saarbrücken under the week. For the important match against Leverkusen, Weidenfeller, Bender, Blaszczykowski, Sahin and Lewandowski were back in the starting formation for Langerak, Kehl, Kirch, Hofmann and Schieber. Reus remained on the bench due to muscular problems.

Kloppos opposite Sami Hyypiä made three changes compared to the 2-1 cup victory against Freiburg. Spahic, Castro and Hegeler replaced Wollscheid, Reinartz and Kruse.

Right after the first couple of minutes were played, it was clear that Bayer had a certain plan to hold ground in the Wesfalenstadium. 30 meters in front of their own goal they extremely tightened up their formation, waiting for counter attacks and although our Borussia had an advantage in ball possession, our guys had no efficient idea on how to break this compact defensive formation. More than a few half-chances by Lewandowski (3.,), Mkhitaryan (11.) and Sokratis (17.) did not come out in the beginning. 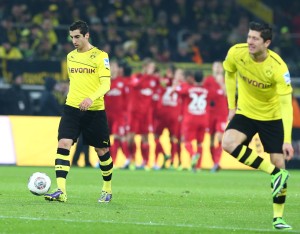 Dortmund tried to break the Bayer defensive line with consequent built up over the wings that was answered by Leverkusen with hard tackles and intense pressing in their own half. Leverkusens plan worked well and was an efficient one: two fast counter attacks by Hegeler (8.) and Can (13.) underlined Bayers offensive qualities and should have been more than warning for our defence line around Friedrich and Sokratis in the centre. But it was then one of our most experienced, but yet not completely integrated, players with a crucial failure: Friedrich tried to clear and – under pressure - passed the ball directly to Can. Over Castro the ball was received by Son who quickly overran Weidenfeller and scored into the empty goal (18.). Leverkusens plan paid off and Dortmund still did not have a proper answer. In addition, an unusual nervous tension could be felt that manifested itself in many wrong passes and lost tackles. Although we had the chance to equalise due to the individual class of Lewa and Micky (30.), our Borussia remained with no power to break through the Bayer defence. The Werkself on the other side even had their chances to extend the lead that luckily remained unused by Son (31.) and Hegeler (39.). With 1-0, both teams left the pitch after 45 minutes played.

Hectic after the break: Red for Spahic and Sokratis

Without any changes but with more determination, Dortmund began the second half of the game. With a higher pace in the built up, Borussia created more and more box scenes. As a consequence small and some nasty fouls raised the intensity of the match while Bayer was completely forced into the defence with everything they had. Dortmund however could still not develop clear opportunities; Kubas free kick that could barely be cleared by Kießling before it reached Lewa in the box remained an exclusion (51.). 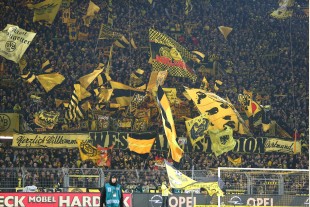 Sven Bender could not continue the match after being fouled by Hegeler (59.). A shock moment in the stadium; if Iron Manni really had to quit the match voluntarily due to an aching ankle, it must be something very serious… Klopp decided to substitute in favour for the offence and sent Reus on the pitch as an additional forward player, whereas Micky took over Benders position (63.). Meanwhile the game got more hectic, fiery and weaker then right after the halftime. On either side the number of fouls increased on cost of flow of play. The misfortune considering injuries however is a constant companion this season. Sahin twisted his ankle and had to be replaced just like Bender before. Piszczek took his position (81.) – Lord, help us!

At this time, Dortmund had already one player more on the pitch. Minutes before, Spahic was send off after a hard foul against Lewa and a dispute with Micky (80.). For the last ten minutes, Dortmund tried everything possible to at least save one point on this black Saturday. Lewandowskis last promising shot form 10 meter distance was saved by Leno (86.), it was simply not our day… In addition to all this, Sokratis saw a second yellow card and was sent off the pitch during the additional time due to his reaction to a referee’s decision. A more than unnecessary action of our central defender who will now miss the next league match against the offensive squad from Hoppenheim.

A tactical strong performance from Leverkusen was enough to defeat our Borussia. Bayer was determined to kill our built up right away with aggressive and hard tackles, leaving Dortmund with no offensive solutions. A few fast counter attacks then paid off with the goal from the fast Son. In the end, 10 minutes against 10 guests were not long enough to strike the equaliser.

Now, everything comes down to the match on Wednesday in Marseille. Due to the long list of injured players, I don’t know yet which of our boys will field in France. One thing however will be for sure: We will see 11 Borussians willing to give everything they have to win this match and to proceed into the knock out phase of this year’s Champions League. Forget Leverkusen - next stop: Marseille! 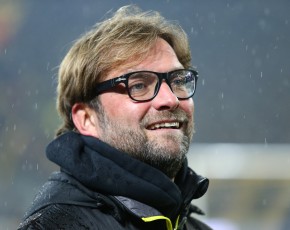 Jürgen Klopp: "We didn't do well in the first half. In second it was more passioned, but not really good. I can't remember that we ever lost so many duels as today. Our thinking was too often too slow, we were to imprionsed by our offensive play and had no security in our ballposetion - then you can't win, even we can't."

Hypijä: "I am really happy for the team. We showed everyone in the first half what we are capable of. In the second we fought and won. This victory was important, because Dortmund was only 3 points behind us."