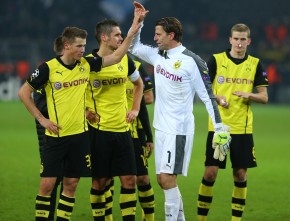 After three defeats in the last three competitive games, some critical voices about Borussia Dortmund came up. However, those voices were silenced this past Tuesday when Borussia defeated SSC Napoli in maybe the most important match of the last weeks to keep the goal of staying in the Champions League possible. Moreover, Borussia has everything in its hands now. Because of the 3-1, Borussia won the direct comparison with Napoli and with a victory in Marseille on the last match day, Dortmund will go through the round of the last 16 for sure. But not only the result was quite fitting, the black and yellows also presented a strong style of play, created lots of opportunities (unfortunately, this means they also missed a lot) and showed heart and passion for another time. And of course, the Westfalenstadion was also there to back their team up. It was a good evening worth remembering.

Coach Jürgen Klopp needed to make one change to the line-up Borussia presented against Bayern Munich. Center back Manuel Friedrich is not (yet?) allowed to play in the Champions League so Sven Bender got the spot beside Sokratis. For Bender, skipper Sebastian Kehl took the place in the double six alongside Nuri Sahin. The rest of the team stayed the same even though it was another extemporary way of forming the defensive line after the recent injuries suffered by the names of Subotic, Hummels and Schmelzer. Napoli on the other hand missed Hamsik, Mesto and Zuniga. 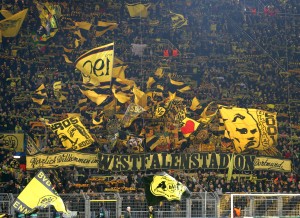 Before the match, many people talked about the different situations which were possible in this group. However, it was obvious that the best result for Borussia would be a victory (what else?), the perfect result would see Borussia winning with at least two goals. The biggest focus, however, lied on winning the match at a first stance and looking for the group constellation after the match. Nuri Sahin stated after the match that Klopp told the team about the different possibilities on Monday, but Nuri did not understand everything so there were situations where he asked his colleagues what the result in the game would eventually mean. Of course, the Westfalenstadion was packed once again and the same fans who were praised for supporting their team even after the defeat against Munich on Saturday were ready to gain this important victory.

And the match started promising as well. After ten minutes and a corner kick from the right taken by Marco Reus, Robert Lewandowski was hugged in the box by Napoli defender Fernandez. What had to follow, followed when referee Carballo awarded Borussia the deserved penalty kick – one of the better calls by the ref who for the rest of the match was not the best man on the pitch. Marco Reus took advantage, took the penalty and left Pepe Reina no chance. Eleven minutes had been played, Borussia was already 1-0 ahead and it looked like the evening could make the last defeats forgettable. Borussia was willing to double the score so that less questions concerning the group constellation could be asked and therefore continued the attack. Henrikh Mkhitaryan showed one his best matches in black and yellow and assisted Robert Lewandowski three minutes after the lead who found himself in front of the goal only guarded by Reina. But our Polish striker lacked the efficiency he presented so many times before and slightly missed the goal. The next chance was Marco Reus' free kick from 17 meters who was cleared by a good save by Pepe Reina (18th). Furthermore, "Iron Manni" Sven Bender needs to be celebrated in this text as well. Bender broke his nose in a tackle (nobody knows why Borussia did not get another penalty here), but continued to play for the whole 90 minutes. Chapeau. He even bled on three different jerseys, one of them was brought in directly from the fan shop. You can not destroy "Iron Manni". 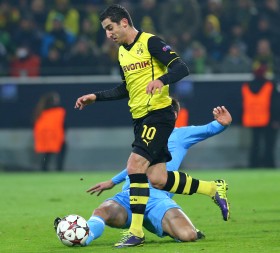 Napoli, however was not without a chance. Pandev was beaten by Weidenfeller and in minute 28, Callejon only hit the left post after a good attack from the right side when he marched through the Dortmund defense and was not to be stopped by defenders Durm and Großkreutz. After these ten minutes of Napoli opportunities, Borussia took over control again and the next chance arose for Mkhitaryan who once again stormed through Napoli's defense as if they were just visitors. But his shot was saved again by Reina (33rd). It was an intense football match at a high level from both sides. Even though it could sound like Borussia was the dominant team in this match, Napoli also proved why they are a competitor for the spot under the best 16 teams in Europe right now. However, Dortmund had the most and best chances. The problem was: they did not use them. Just like Lewandowski after an assist by Marco Reus. The striker appeared in front of Reina once again, but once again failed to overcome the hurdle of the goalkeeper (35th). The last opportunity of the first half was one for the guests when Armero's shot from a long distance was a challenge for Weidenfeller, but the national keeper saved it once again (45th). Therefore, it was 1-0 going into half time. A deserved lead for Borussia which could have been bigger if Dortmund showed more cleverness and efficiency but which could have been equalized as well.

The second 45 minutes of the match were no big difference. Borussia continued to create another row of good chances, the next was given away by Marco Reus who was totally free on the left edge of the penalty area but managed to get the ball slightly besides the goal (53rd). Tension was still in the air, the Westfalenstadion was making a lot of noise but could not understand why Borussia was not up with two goals at this point so that a little bit of despair could also be felt. Another big opportunity saw Mkhitaryan storming through the Italian defense for one more time but Reina managed to get his hands on his shot so that the ball could be stopped by a defender just inches before the goal line (58th). And in football, you are very often punished for not using your opportunities, especially in the Champions League which we learned the hard way so many times in the past. This time, Roman Weidenfeller prevented punishment when he stormed out of his goal to shorten the ankle against an unfettered Higuain who made his way through our defense after a nice lob just seconds later. 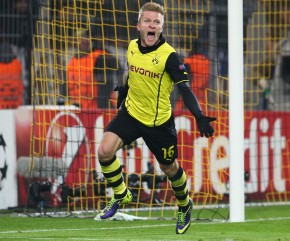 This could have been the 1-1, but Weidenfeller showed his class and was therefore celebrated with "Weidenfeller! Weidenfeller! Hey! Hey!"-chants. What followed was a brilliant counter attack over the left side after gaining possession next to a throw in from Neapel. Reus assisted Kuba and the fan favorite brought the big relief for the moment. 2-0 Borussia after one hour had been played. This was the result we were hoping for! However, Sebastian Kehl had something else in mind when the skipper presented one of his infamous misdirected passes, right in the foot of Higuain who quickly assisted Insigne and just like that, the two goal difference was given away again (71st). This goal sucked because it was so unnecessary. Kehl gave the ball away too easy and even Weidenfeller did not have to get out of his goal so that Insigne had no big problem to score in this situation. Fortunately, Borussia would not be Borussia if they would not just continue. However, joker Pierre-Emerick Aubameyang needed two chances to score the 3-1 and used the more difficult one of them. First, he was through the whole defense and just needed the beat Reina but failed to do so and in a more difficult position, he scored minutes later after another quick corner attack where he could play off all of his quickness (78th). Nevermind, the 3-1 was enough even though Mkhitaryan had the last opportunity of the match where he only hit the post in minute 86. 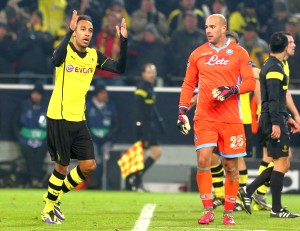 Wow. This was not an easy match and not a match which was good for the nerves for supporters of Borussia Dortmund, but in the end, the result is just fair and well deserved. And it is a good result because just like stated before, Borussia now just needs to win in Marseille to make it to the next round. Of course, a little bit of efficiency would have been nice and welcomed by the fans in the Westfalenstadion who had to tremble for a long period of time, but this is football and as long as the result is fine in the end, I have nothing to complain about. Furthermore, the atmosphere in the Westfalenstadion was quite good once again and for those of you who want to get an impression about it, just check out this video from our YouTube channel. On Saturday, Borussia will now travel to FSV Mainz 05 in Bundesliga competition where we hopefully will get back on track in the league just as we did on Tuesday in Champions League.