A lost game, nothing more 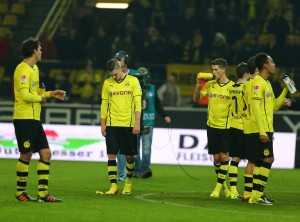 For many of us this was the game of the season and which we lost bitterly with 3 to 0. But for me it wasn’t. Of course we lost contact to the first place and Bayern Munich who are now 7 points ahead of us and yes even Bayer Leverkusen overtook us by 3 points. But we are still on third place something that we would have cherished only 4 years ago and which we should still be proud of. We are still the second best carrying football force in Germany. And if we consider that these next games will be way more important than losing a game against the currently best team in Europe we have to do what Jürgen Klopp told his boys after the defeat: ”I’ll give you five minutes of depression, then we go on. We have to focus on the next game. We have to make the right conclusions and then we can look forward to this next game on Tuesday. We want to work hard to get this final game in Marseille, this is our mission.” And after all, we only lost 3 points.

Ok let’s get this match report over with quick and fast. Our defensive line was as expected a totally new one. Sokratis played together with our new addition Manuel Friedrich as a defender. Großkreutz was of course playing and on the other side Durm got yet another chance to prove again that he is a great defender and that he did. The line-up in midfield was expected Sahin besides Bender took over the more defensive part so that Kuba as well as Miki and Reus could flourish in the offense. Lewandowski was of course our center-forward. 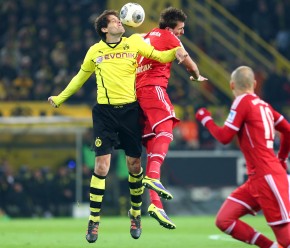 The first half was dominated by the Bavarian team without them getting any big chances. The big chances were on our side. In the third minute Kuba put a well-placed ball into the penalty area where Lewandowski couldn’t control the ball as he usually does and so placed the shot well over the bar (3.). Bayern circulated the ball in their own ranks, but didn’t create any big chances at all. It was again Dortmund who threatened to make the first goal. Blaszczykowski again passed a ball to Lewandowski who directly passed it on to Großkreutz but Dante get his foot in between just in time before Kuba could score (21.). In the 29th minute Reus took advantage after Boateng slipped and Marco was on his way to the goal, but Dante pressed Reus to the side so that his shot was blocked by Neuer (29.).

The second half started just like the first. Bayern dominated the ball but was no threat to our defense. This is especially note-worthy since Manuel Friedrich made his first Bundesliga game since one year and everyone spoke about our new arranged defense as the biggest weakness but proved itself to be our strongest part. After 6 minutes our boys had the next chance to score a goal. Bender chipped the ball into the penalty area and close to goal. Neuer and Lewandowski both go for the ball but miss it and so the ball went wide (51.). After that both teams didn’t create any chances. Our boys played on par with Bayern for the first 60 minutes and even had the big chances to lead with 1:0, but failed to score and so something happened which always happens if you fail to score, the enemy gets one chance and nails it. Mario Götze came onto the field (56.) and he was the one to score for Bayern in the 66th minute. After that Dortmund increased the pace even more. After just 4 minutes Mkhitaryan had the big chance to equalize. Großkreutz is left alone on the right side of the field and plays the ball, not quite perfectly, to Miki who fails to control the ball fast enough and shots directly into the arms of Neuer (70.). Just 3 minutes later Reus hammered the ball onto goal, but sadly Neuer saved it, just before it could hit into the right lower corner of the net (73.).

When the 80th minute mark passed Dortmund went all in which left Bayern too much space in the offense. That was directly punished by Bayern. Thiago played a long ball onto Robben and the latter chipped the ball past Weidenfeller into the net (85.). Just 2 minutes later it was Müller who scored for the really undeserved 3:0. (87.). 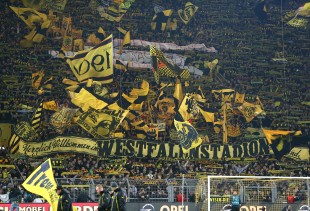 So what is left to say after this game?

We are a great team, we played on par with Bayern and even had the better chances to score the leading goal. The only thing we lacked was to use those chances and we were bitterly punished by it. Everything said before the game was for naught as our defense played really well. It is yet to be seen how our defense will look against Neapel since Manuel Friedrich isn’t allowed to play in the Champions league. There are even several positive side-notes to this game that nearly went under after this defeat. First of all Lukasz Piszczek made his comeback in the 79th minute and was greeted with great applause. Erik Durm proved that he is a full-fledged backup and even more for Marcel Schmelzer. And last but most importantly we got the best fans of the world. For that I’d like to quote a friend of mine who was standing right in the middle of our yellow wall yesterday and this wall kept on chanting even 10 minutes after the game was over. She said the following and words can’t be more truthful:

“This club can’t be described with words and moments like these are much more valuable than all the titles and trophies in the world.”

Dortmund and the fans never defined themself with titles, but with moments like these that even in defeat we stand together as one and those moments are far more memorable than anything else, because we never forget where we came from. 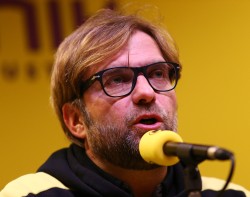 Jürgen Klopp: "I really don't care about the height of our defeat. The second and the third goal don't reflect the game anymore. Bayern did change their play they used a lot of long balls. We had the better chances until Bayern scored 1:0. You really have to score before that. After the 2:0 the team gave themselfs up."

Guardiola: "We are pleased, because we won against the best counterattaking team of the world."