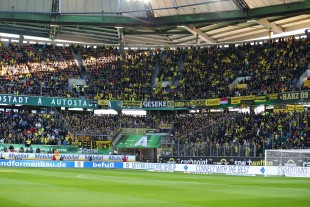 With the 2-1 loss in Wolfsburg ends a shitty week, that is furthermore overshadowed by the fatal injury of Serbian centre-back Neven Subotic. According to Jürgen Klopp a cruciate rupture is suspected. [in the meantime this has been confirmed] This is a report about a match, in which Borussia Dortmund was not able to acess 100% of its own capability. At the end of the current week we probably have to admit, that it is not all roses.

Expectations were high due to the fact, that the away match in Wolfsburg was the first match after Borussia Dortmund had drawn the consequences out of the pyro incidents in Gelsenkirchen. As a result, the Dortmund ultras lost their season tickets for away matches (200-300 persons), furthermore BVB is still in search for the individuals, who are responsible for the criminal acts (20-30) to ban them permanently from German stadiums. Due to this fact, everyone asked themselves how the away support would be without any organization. In short: disastrous. It seems that Borussia Dortmund have shot themselves in the foot and have to do without a motivating away support in the future. Whichever way you look at it, a tough situation. 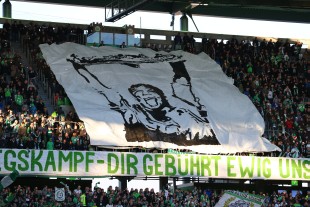 Before the match the Black and Yellow sickbay eased and skipper Sebastian Kehl was able to make the trip to Wolfsburg, after the international break he surely will be an option. In contrast to Mats Hummels, who had recovered from his thigh problems, Polish international Jakub Blaszczykowski was not able to participate due to a gastric flu that made him bed-stricken. Pierre-Emerick Aubameyang took his place. The opponent VfL Wolfsburg had to do without Brazilian Diego, who was replaced by Caligiuri.

In the first phase of the match, it was remarkable how agressive and fast Wolfsburg attacked the defensive line of Borussia. A consequent build-up via Neven Subotic and Mats Hummels was hardly possible. Although VfL put high pressure on Borussia, the team of coach Jürgen Klopp developed a high number of scoring opportunities - via long passes - within the first 20 minutes. 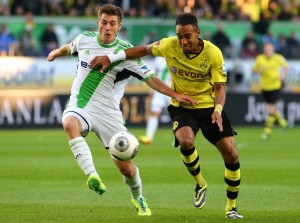 After only four minutes had been played, Mats Hummels found Pierre-Emerick Aubameyang with a long forward pass, unfortunately Marco Reus came only seconds to late and missed the cross from the right wing. Mats Hummels was the one who nearly scored the opener after a set-piece by Nuri Sahin from the right wing, that had been deflected by Aubameyang. Unfortunately his header went over the crossbar.

Another promising scoring opportunity was then destroyed by Caligiuri in minute 8. Borussia Dortmund gained posession of the ball after a corner of Wolfsburg and the midfielder was only able to stop the counterattack with a tactical foul, which granted him a yellow card. Hitherto it was Aubameyang in minute 10 who left out the biggest opportunity: Robert Lewandowski sent the Gabonese with a long forward pass but the striker missed the goal closely from a sharp angle. In general it felt like the missing motivating away support also had an impact on the BVB players, who lacked of resoluteness.

After 22 minutes had been played, VfL Wolfsburg called attention to themselves for the first time: A perfect cross from the right wing by Patrick Ochs found the head of former BVB player Ivan Perisic, fortunately the header missed the goal closely. Neverthless a huge bang for Wolfsburg. 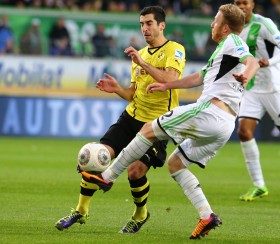 During the middle of the first half, two things became obvious: First of all referee Jochen Drees seemed to have an off day and applied double standards when judging close duels. As a result Mats Hummels as well as Sven Bender collected early yellow cards, even though they had not been conspicuous at all. Secondly serious scoring opportunities seemed to be rare, instead the teams worked themselves into the ground in midfield.

In minute 31 it was once again a cross by Ochs from the right wing - Schmelzer was not able to prevent it (several times today) - that nearly led to the oper for Wolfsburg. If Medjojevic would have been aimed a bit closer, the ball would have been found the way into the net. Subsequently the (unlucky) Henrikh Mkhitaryan lost the ball within an own attack and allowed Patrick Ochs a shot from wide range, that Roman Weidenfeller saved with effort.

Only minutes later the disaster: Neven Subotic became unbalanced after an aerial duel with Ivica Olic and twisted his knee. Within seconds the Serbian made clear that Borussia Dortmund had to do without him. By now a torn ACL is suspected, this would mean an absence until summer. From one convalescent to another: Get well soon Neven, I feel with you! 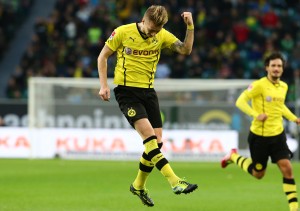 The lucky opener after a magic free kick by Marco Reus (out of 16 meters) became secondary. In fact Reus put Borussia Dortmund in front, but the team had more luck than judgement. VfL Wolfsburg showed a brilliant ball-winning ability, pressed forward agressively and took of playmaker Nuri Sahin intelligently.

In the beginning of the second half, BVB gave the impression as if the team had recognized about the importance of being combative. Within the first minutes, several times the Black and Yellow boys gained posession of the ball in promising positions. Characteristic was an attack in minute 54: Robert Lewandowski gained posession of the ball on the right wing and sidestepped three (!) defenders. With maximum speed the Pole ran towards the box. Via Armenian Mkhitaryan, the pass found new signing Aubameyang who shot fractionally wide from the right side of the box. A volley would have been the better choice.

Punishment followed swiftly. Only two minutes later a free kick by Rodriguez from the right wing found the way into the net. Knoche irritated Roman Weidenfeller, who had been called up for German national team for the first time on Friday, leaving Roman without a chancel. 1-1. 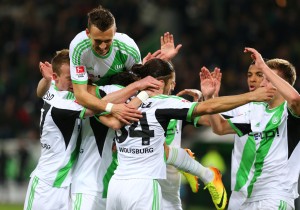 As if this was not enough, the punishment continued. After 69 minutes had been played, Marcel Schmelzer could not prevent a long-range shot by Ivica Olic from the right wing. Thunderous applause followed after the ball had found the net from the inside of the post. Wonder goal! 2-1 Wolfsburg!

Only one minute later fortune did not smile on Marco Reus. Nearly out of the same position from which he scored the lead, he only hit the crossbar via free kick. What followed can be summed up easily: Quite analogical to the match against Arsenal FC, Borussia Dortmund hardly pressed forward but totally lacked sense of purpose. To crown it all, referee Jochen Drees denied Robert Lewandowski two penalties shortly before full time. At least one of them was justified. Instead Borussia Dortmund returns to Dortmund empty-handed. 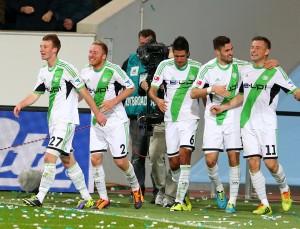 What remains to be said? A trend-setting week has come to its end. While the style of play against Arsenal FC was convincing, the team seemed to be exhausted against VfL Wolfsburg. This is why one has to raise to question, if it would not be more expedient to give certain players more breathing-space and rotate more often. Despite the bad results in Champions League and Bundesliga, we can still do it on our own. Maybe we should start with Bayern München.

Last but not least, all the best to centre-back Neven Subotic, who risks his neck fighting for the club for several years now. Keep your head up buddy, get well soon, we'll wait for you! 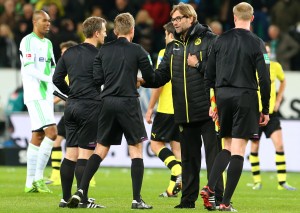