Fantastic Derby Victory is overshadowed by Side Noises 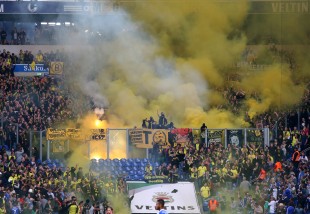 What a day! Borussia Dortmund did not only win the derby but also showed the Blues that there's a huge gap between the levels of performance of the two teams. The end result (3-1) does not really mirror the course of the game. Furthermore the Blues have been also defeated particularly with regard to the support from the stands. All went well? In fact that was not the case due to some BVB supporters who delayed the kick-off with pyro action for about five minutes. As if this was not enough, this event is distracting the public from the spotless performance of team and supporters.

Once again it was time for the away derby and so we embarked on the journey early to avoid the regular difficulties when travelling towards Gelsenkirchen. Actually we wanted to make a detour with the target Essen to dogde the main stream of BVB supporters. Indeed, the fact that the route between Bochum and Essen was closed due to "football supporters in the track" played in our hands. We were redirected immediately to Gelsenkirchen. 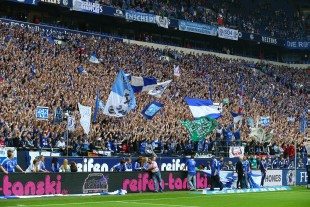 So we reached the bird cage already hours before kick-off and it seemed, that even the supporters of Scha*ke do visit the arena only as long as necessary. It was like a morgue. On a small stage besides the stadium small children - who should enter the pitch with the players - were interviewed in front of approximately 20 Blue supporters. Out of this interview arose a wonderful dialogue between moderator and the children I do not want to keep back: "How old are you?" "Nine" "Are you a Scha*ke supporter?" "NO!" "When are you going to be Scha*ke supporter?" "NEVER!" "What if I'm going to give you a scarf as a present?" "NO!" "And if I will add a ball?" "NO!" The small guy resisted every attempt of the desperate moderator to take him over to the dark side of the Force. In his distress he asked a girl: "You're a Scha*ke supporter, aren't you?" "NO!" "Are you a football supporter?" "JA!" "I'm not going to ask further.."

Unfortunately we were informed really fast, that the supporters who were in the track and shortened our journey, came from Dortmund and met problems. The bottom line is that they did not do anything more than crossing the track to reach a certain train. Rumors that there had been a conflict between the police and the forementioned persons could not be confirmed. This is why the Black and Yellow stand was not well-filled 30 minutes before kick-off. Besides the support was not worth mentioning until then. It seems that everyone is focussing on the man on the pedestal and is no longer able to support his team self-initiated. An exception has been the unavoidable chant "Schalalalal Scheiße 04". 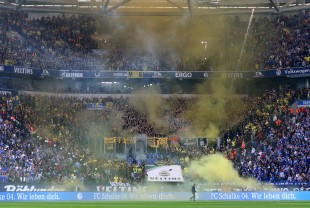 10 minutes before kick-off the Dortmund Ultras stormed the stands and chanted "Borussia, Borussia". The support seemed to be secured. As previously announced the lower stand presented himself in black. Only a few seconds later the first plexiglass windows were destroyed. The BVB supporters obviously took with them a lot of hatred and acted it out. In addition they brought with them a lot of firecrackers and other pyro equipment that prettified the ugly sports hall with yellow smoke. When firework rockets flew towards the top of the arena, both teams left the pitch. The atmosphere had been heated up.

Unfortunately I'm not able to write this report without taking a stand on the occurences: I've never before lighted anything in a stadium, not even a cigarette. I'm not a real friend of pyro equipment, especially when it's affecting my view I'm getting angry. Still I'm not invoking the decline of the West when there's pyro within the stands. If you use it responsible it seems to be possible to light up pyro equipment without threaten anyone. In view of the fact that it happens quite often, no one gets injured. 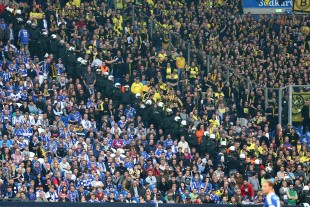 This is where the problem starts: The BVB supporters did not use it responsible and put other viewers at risk. Flares where thrown on the pitch unregulated. A smoke-bombe even landed next to Roman Weidenfeller, who tried to calm the firestarters. The biggest specialist was the guy who brought his own flare gun with him. It seemed that he was not able to handle the gun and fired unregulated. A few "projectiles" bounced off the roof construction and one even flew on the stands that were filled with Blue supporters. I haven't seen something like this in a German stadium since the 80's. People who already have been shot at with flares know, that it's no fun at all. The involved supporters are not allowed to complain if this event has adverse consequences. The strive for a legal use of pyro equipment has been done a bad turn through some fans. Furthermore they put forward a convincing case for the German populists. 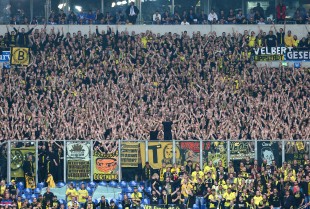 mmediately the police covered the Black and Yellow stands. For a short moment it seemed that some Blue supporters tried to storm the stands. Fortunately no one came through and the match started with a delay of 5 minutes. The referee announced that the match would be cancelled if there would be any further pyro equipment. The threat seemed to be succesfull, or the firestarters had shot their bolt. Nevertheless the supporters remained calm and the police only stood in stand-by position.

In the beginning the style of play was quite gentle. BVB developed a superiority on the pitch but was not able to score, allthough Aubameyang's cross did not find a teammate and Marco Reus was not able to convert a volley after a pass by Lewandowski. 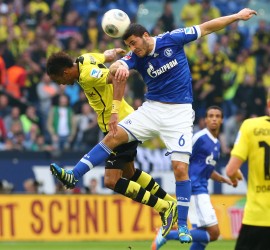 The Blues had an odd starting XI (including three left-backs and only three offensive players) and acted observant. But what goes around, comes around. After 15 minutes Großkreutz won the ball and passed it on. A combination by Mkhitaryan and Reus found Aubameyang within the box and the Gabonese scored the opener from short-distance. The home supporters were shocked. Only a few moments ago they thought they would be on the same level with BVB but had to quickly accept their inferiority.

Dortmund was dominant. After a brilliant deep pass by Nuri Sahin, Timo Hildebrand saved in the nick of time before Marco Reus was able to score the second goal. Kevin-Prince Boateng thought it would be nice to point the way and fouled Mats Hummels from behind. He did not even pick a yellow card. Another extraordinary combination between Reus and Mkhitaryan found Lewandowski, who was unmarked in the box but Hildebrand saved the shot of the Polish as well as the rebound by Aubameyang. If never experienced the stadium of the Blues in such a quit way before. At the height of the halfway line you still only recognized the away stands. An evidence of incapacity. 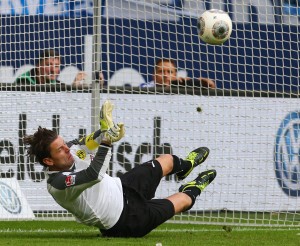 Out of nothing they got the chance for the equalizer. Fuchs sidestepped Hummels and Subotic fouled the Austrian within the box. Kircher saw a foul and his decision was acceptable. Boateng took the ball and found his master in penalty hero Weidenfeller (4 saves out of the last 8 penalties). A quite imprecise shot. During this moment of the match, the equaliser would have been undeserved due to the fact, that the Blues were not able to create any scoring opportunity until then.

Now Gelsenkirchen started angry attacks and the crowd awakened from its state of shock. It became noisy for the first time. Nevertheless this short rebellion was only a straw fire. Only a few minutes later Borussia Dortmund had a handle on the match again. Dortmund again created scoring opportunities. After a beautiful cross by Aubameyang, Reus headed the ball towards Hildebrand who saved the header with his second try. As the half-time whistle blew, one could only accuse oneself of not having scored more than one goal. 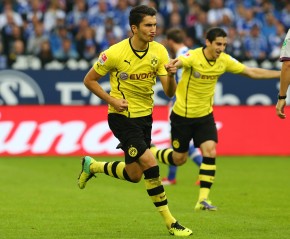 During the half-time the police strenghtened itself but fortunately still stood in standby mode. Schmelzer was replaced by Durm. It seemed that Jürgen Klopp did not want to risk anything after Schmelle earned a yellow-card and Durm proved that he is a reliable replacement. Aogo and Boateng tried to provoke Kevin Großkreutz. A mass confrontation was the result, but either Großkreutz or referee Kircher let themselves get worked up.

Black and Yellow remained dominant on the pitch as well as on the stands. The terrific Mkhitaryan sprinted towards the opponents box and crossed the ball to Sahin, who scored a tremendous goal out of 18 meters. The Blue scum seemed to be defeated and ceased its attacks. Also the Nordkurve remained silent.

When Jens Keller put in Max Meyer the style of play changed. The youngster immediately caused a stir and was really versatile. During his second attack he sidestepped Subotic and crossed the ball perfectly to Szalai. Weidenfeller was able to save the shot but was chanceless against Meyers rebound. The Blue supporters awakend once more and it became noisy. But instead of expected angry attacks, BVB took possession of the ball again. 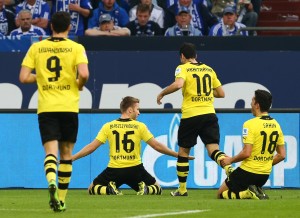 Aubameyang, who became more and more invisible during the match, was replaced by Kuba and this change should be worth while. Mkhitaryan overcame the whole Blue defense with a terrific sprint from one box to another and still found his teammate Kuba with a square pass. The cross was such a beauty, that Blaszczykowski could not resist to score the 3-1.

The Black and Yellow stand jumped and danced while the rest of the sports hall was silent. They prefered to suffer in silence instead of supporting their team. They probably realized that they would not be able to gain points today. The chant "hier regiert der BVB" totally mirrored the dominance on the pitch as well as on the stands. A totally unusual and bloodless performance by the Blues.

After the final whistle Black and Yellow party mood was omnipresent. The team got its well deserved ovations and danced with the supporters. Hopefully these pictures won't be displaced by the occurences before the kick-off. 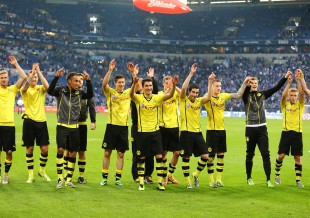