Wounded but not beaten 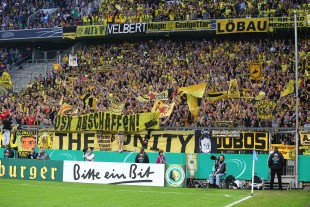 In the second round of the national cup, Borussia challenged the so-called „Lions“ from TSV 1860 Munich in the sold-out Allianz Arena. And although lions tend to be aggressive and offensive creatures in nature, none of these attributes would suit for those lions we saw yesterday. Our black and yellow squad had to face a very defensive opponent that was building a real bulwark around their box. As a consequence, the offensive part was taken over by our BVB. 38 attempts on goal, 18 corner kicks and 4 times aluminium speaks for itself. After a long and temporarily frustrating run on goal, Aubameyang brought salvation by pulling the lions teeth with a late penalty-goal. Wounded but totally deserved, our Borussia proceeded to the next round after 120 long and intense minutes.

New Munich coach Friedhelm Funkel changed his squad on two positions after the convincing 3:1 success against Erzgebirge Aue last weekend. Volz and Stahl started for Friend and the suspended Vallori (red-card). Thereby, the former German national striker Benny Lauth formed the only offensive part in the formation of 1860. Juergen Klopp on the other side showed up with 5 changes compared to the match against Nuremberg on Saturday. „Cup-Keeper“ Langerak started for Weidenfeller, in addition, Hummels, Lewandowski, Sahin and Mkhitaryan returned into the starting formation. Aubameyang, Subotic and Duksch took their seat on the bench, whereas Schmelzer had to lay-off due to a tight strain. 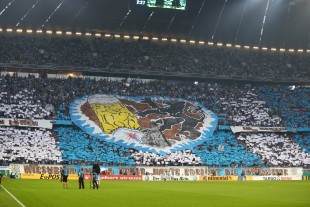 The first encounter of both opponents since March 2007 could simply be summarised with „one-way football“. Right from the beginning, the Munich defensive line built up a massive block in front of keeper Garbor Kyraly. 1860 even formed a back six when Dortmund was in ball possession. Dortmund on the other side took over the initiative and tried to overcome the deep standing lions with fast combinations. Thereby, our Borussia found its way into the box several times, the chances however could not been used properly. The first serious attempt was up to Marco Reus who found a gap for a proper shot from 15 meter distance that missed the goal closely (17.). Shortly after, it was Sahin with a shot out of the second row that forced Kiraly to a brilliant save (19.). 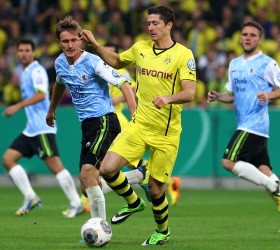 The euphoric Munich audience had to wait until minute twenty for a first wake-up call. After a fast counter attack, Benny Lauth could freely approach Mitch but got luckily whistled back by referee Michael Weiner due to an off side position – discussable decision... In the defence, 1860 remained well organised and compact. That let to a raising frustration of our boys. And although the game did only know one way, Dortmunds concentration and determination did more and more fade away. Misplaced passes sneaked in and serious goal attempts became a scarce good. As a consequence, it was up to the Lions to create the next highlight: After their first corner-kick, defender Stahl jumped higher than our central defence - his powerful header from five meter distance missed the goal closely (37.). Dortmund on the other side could just create one more promising chance before the half time whistle: After a fast throw-in by Durm, Kuba found its way into the box and crossed to Robert. Our polish striker however could not control the ball properly and got prevented to finish off. The follow-up shot by Reus was blocked as well (45.+1).

Kuba and the crossbar 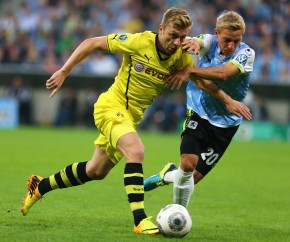 Coach Klopp must have found the right words in the catacombs of the Allianz Arena. Back on the pitch, Borussia shifted up. Kuba hammered the ball from six-meter distance against the crossbar (49.) before Robert did miss a golden chance after a nice build-up play via Micky and Großkreutz. Lions keeper Kiraly was already beaten, but Kevins cross from the right was miserable handled by Lewa who tried to control the ball instead of just finishing off with his weaker left foot (57.). Meanwhile, Langerak was also allowed to participate by saving a shot from Stark out of the second row (52.). And although the direction remained the same, Borussia became more and more desperate thanks to 1) keeper Kiraly, 2) the 1860 defence that was passionate defending their goal and 3) the own inability. No matter if Reus (65., 76.), Mkhitaryan (70., 88.), the substituted Hofmann (71.) or Sahin (82.) – the ball simply did simply not want to cross the line of the Bavarian goal. And since the home team did cease all offensive efforts and could not manage to score a lucky goal either, both teams proceeded to overtime. 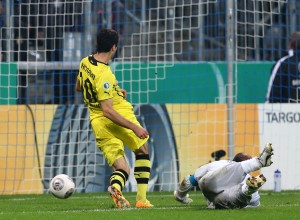 Concerning the conversion of chances of our Borussia, the additional time was in no way inferior to the regular playing time – it started even worse. First, it was keeper Kiraly who deflected a shot by Reus with his toes against the post (93.), shortly after, it was again Marco with a beautiful free-kick from 21 meter distance that hit the crossbar (97.). It felt like the goal of the lions was simply boarded up… But when the energy in the legs and therewith the players concentration slowly started to fade away, Stahl had no other choice to straddle Reus from behind right in the box. Penalty for our Borussia and red card for the 1860 defender. Aubameyang, who came into play for Kuba a few minutes before, took over the responsibility and nailed the balled into the net (105.). Finally, the curse of the boarded Lion goal was beaten. Relief on the black on yellow side was accompanied by capitulation on the blue side. Consequently, a picture perfect counter attack right after the changeover brought the final decision. After being beautifully served by a cross from Hofmann on the right side, Mkhitaryan first passed Kiraly and then Volz to finish off for the comfortable 2-0 lead. The stubborn will of the 1860 defence was finally broken and the entry of the round of the last 16 was secured. But before the final whistle blew after 120 long minutes, Aubameyang hit the crossbar one more time with a powerful free kick. 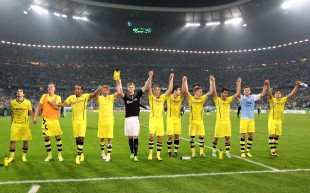 It has already been easier to pass the second round of the national cup. Our Borussia was confronted with a passionate fighting and unconditional defensive squad from Munich that knew how to drive our guys to desperation. Chances after chances could not be used properly so that the danger of a lucky shot by 1860 was always present. Anyways, after 80% ball possession and 39 attempts on goal, this victory was fully deserved. Now, we quickly have to pull ourselves together after this exhausting match in order to face Freiburg in the Westfalenstadium next Saturday, 3.30 p.m. Next stop, Bundesliga!