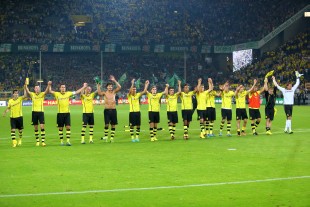 On Thursday, Borussia Dortmund released the preliminary results for the financial year 2012/2013 and announced a turnover of 305 Mio. € and a pre-tax profit of 61,5 Mio. €. If it would have been Robin Hood, rather than Robin Dutt visiting, we would most certainly have been in danger. But it was the new manager of Werder Bremen, not the best-known thief of almost the same name that came to Dortmund on this Friday to see the Westfalenstadion in floodlight. Bremen used to be a team that always scored one goal more than they conceded, 5:4 or 4:3 victories were almost a trademark. In the last years, they scored less and less goals, but still conceded as many, bringing them close to relegation last season. The management therefore decided they needed a new manager: Robin Dutt (pronounce “Doot”) changed the tactics and learned them to build a wagon fort, defeat the opponent with one single shot and steal all their points. They did it against Augsburg and Braunschweig already and even though it wasn’t always deserved, this means that they had the same amount of points as our Borussia after two games.

On the other hand, Borussia had two hard-fought-for and truly deserved victories against Augsburg and Braunschweig (yes, the very same) and opposed to Bremen also won their first round DFB-Cup game and the Supercup. In all previous games, Klopp tried something the media started to call “soft rotation”, always changing more or less one player per line. Against Bremen it was Kehl that came in for Bender, Subotic for Sokratis and Reus for Aubameyang.

Also, the fans were back and willing to make up for the missed out game against Braunschweig. 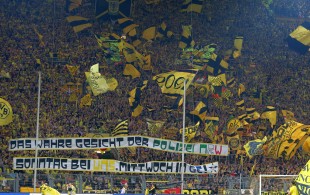 It was strange to see Bremen so defensive, but it seemed to work in the beginning. In the impressive floodlight sphere of the “best football stadium in the world” (quote the Times), it took almost 30 minutes for Borussia to create danger in front of the opponent’s goal. Mkhitaryan and Reus each had two chances, but missed. It was then Kuba who broke the fort and almost scored the opener when his irresistible shot hit the lower side of the crossbar with a bang after a great run through the half of Bremen. Lewandowski was next to try and missed at least three big chances for the goal. Either he missed the goal for centimetres only, or he missed the ball for inches. At the end, the goalkeeper also stood in the way, it was incredible. Last, also Sahin missed two chances. Everyone could try once. There were 19 (!) shots on the goal for Borussia at the end of the first half, but still no goal. Bremen, in the meantime, was nowhere near its own self or the goal of Borussia Dortmund. The fans celebrated their team throughout the first half as if there was no tomorrow. One could feel how desperate everyone was to finally go back and sing for our beloved Ballspielverein. It was just great! All except the one little missing thing: a goal. 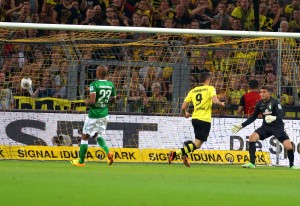 We didn’t have to wait too long for that, though. In minute 55 it was finally, finally Lewandowski who gave Werder their long deserved first conceded goal of the season. The ball was already lost, but in this beautiful manner we got used to the past years, we had it back before Bremen even knew they had it. Kuba to Grosskreutz, to Reus on the goal line, a pass back to the 6 yard box and Lewandowski is completely alone with only the empty goal in front of him. It was almost an offense for a striker like him how easy it was, but he scored anyway. This was the Borussia way, this was great, this was party! But this was not enough for the players. They continued as they had stopped in the first half. Sahin again over the crossbar, then Aubameyang who came in for Kuba (very nice and well-deserved standing ovations accompanied him to the bench) and sprinted away from his opponent leaving him 30 meters behind after 3 seconds, but couldn`t get past the keeper. Then another Werder player just about stopped Lewandowski from scoring on the goal line. It took around 85 minutes for Bremen to realize that they actually had to score to get points. And then there was the first – and only – really dangerous attack from the guests, but Weidenfeller could clear it. Then it was over. Even though we were happy about the fact because our Borussia seemed to run out of energy at the end and Bremen tried everything, it was almost a pity that the game was over. It was so great to have the Westfalenstadion back!

It was a very well-deserved victory and again a very hard fight. It could have been a lot easier if two or three more of the 32 shots we had would have found its way into the goal for sure. The most important thing next to the three points, however, was that we could finally sing and jump again with all of our friends and push Borussia Dortmund to the victory. Because with the fans, the Westfalenstadion is Fort Knox – impossible to conquer.