Win the match for us... and become our heroes! 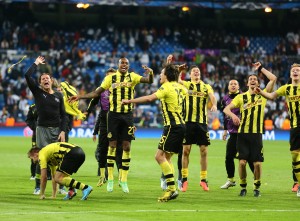 Okay. Here we are. Just a few more than 24 hours before the biggest match of the recent history of the Ballspielverein Borussia of Dortmund. Before the Champions League final in Wembley against Bayern Munich. Who would have thought this possible at the beginning of the season? Who would have believed that Borussia would storm through the often quoted group of death with no defeat and would go on to advance from round to round, from Donezk to Malága to Madrid, with the only defeat in the whole Champions League run happening in the second leg of the semi finals at Santiago Bernabéu? It has been an incredible run so far, all of the players in black and yellow have come so close to immortality. Tomorrow, they can become legends and write history forever.

During the last couple of days, the hype of the German media has been incredibly annoying. However, it probably is just normal that the newspapers and broadcasters hype the first-ever German final in an European competition. But tomorrow at 20.45, all the one-on-one comparisons between Neuer and Weidenfeller, Gündogan and Schweinsteiger, Mandzukic and Lewandowski, don't matter anymore. It does not matter how you call the match – since German media called up to send in suggestions just like "Gerby" or "German Classico". We stick to UEFA Champions League final and rely on the facts – and a couple of good omen speaking for Borussia Dortmund.

Tomorrow, at 20.45, the truth is on the pitch. Two teams compete for the highest price in Europe. One of them has everything to lose and the other one nothing to lose but everything to win. Of course, the first one is Bayern Munich. After winning the championship with record-breaking stats all over the place and storming to the final of the German DFB cup, they also made it to the final of the Champions League for the third time in the last four years. There is no need to say that they have lost the last two finals and no need to remember at the last final which they lost on penalties in their own stadium. Now, after this defeat and two years of living without any titles at all, they face the opponent which stole those titles over the last two years and therefore at times humiliated the great club of FC Bayern Munich. For them, failure is not an option. If they lose the final against Borussia Dortmund, winning the double would become more or less redundant because they were beaten by the club responsible for great parts of pain of the last years, for the price they long for for years. On the other hand, nobody would have ever thought that Borussia could make it to Wembley. They are the biggest surprise of this year's competition and in no way the favorite going into the match against the team which trashed Barcelona on two separate occasions with 4-0 and 3-0. Borussia has nothing to lose in this match, but everything to win. With winning the Champions League, each and everyone of the players in black and yellow will become immortal. Ask Lars Ricken, Jürgen Kohler or Karl-Heinz Riedle about their most important win, about their most incredible experience as a player for Borussia Dortmund. There is a good chance all of them will refer to the Champions League victory against Juventus Turin in 1997, which - ironically enough – took place in Munich. 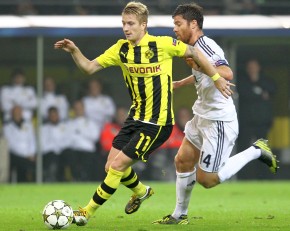 Mario Götze – future Munich player – is the only one not being able to play in the Champions League final and honestly enough, I am not disappointed about that fact. Even though Götze would have been able to give his 100 per cent – which I personally doubt – all eyes would have been on him, waiting for any mistakes or signs of being unconcentrated. I rather see eleven Borussians with the ensurance that everyone will fight and give everything to win the Henkelpott than seeing Götze who did not travel with the team today because of an appointment at the dentist – says it all, doesn't it? Instead of Götze, Kevin Großkreutz is likely to step in on the left side. Marco Reus and Kuba will form the rest of the offensive axis and Mats Hummels will be able to make it in time for the biggest match of his career as well. Munich on the other hand will miss Kroos and Badstuber but has more than enough great players to make up these losses.

There we have it. Everything there is to say about the Champions League final has been said. No more talks, no more discussions, no more hotshots and provocations. Time to write history. Time to become immortal. Time to become legends. Make it happen, Borussia. Dortmund will be packed in black and yellow tomorrow, many people are coming for official public screenings. No need to say that London is already black and yellow and the club and the team can rely on the support of everyone who was able to get a ticket in the black and yellow parts of the stadium. Both cities – Dortmund and London – will explode if Borussia can write the perfect ending for the fairytale which this Champions League run has become. Now fast forward to kick-off, I cannot stand the tension anymore. Like the chant goes: "Come on, BVB. Come on, black and yellows. Win the match for us today... and become our heroes!"