Is Fortuna only a space filler? 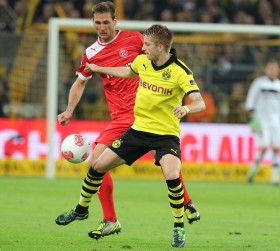 The 3rd encounter with the royals from Madrid in this season lies behind us, the 4th is to follow. Between these two matches of international importance stands another task which seems to be almost forgotten by the majority of black and yellow supporters: Fortuna Düsseldorf is waiting for us, hoping to gain some points what would be connected with a huge step for them in the direction of staying up in the highest German League. Although Borussia does not have to win this game necessarily (and to us it appears to be more a space filler with the use of avoiding that we become crazy while waiting for next Tuesday) they will invest as much as possible in a victory. The essential question: What is possible in this special situation?

Furthermore we can ask ourselves the same question our coach Klopp has to face: Who should practice for the Champions League? Or who should better have a break to get back to a fitness of 100% before playing against Real again? This is not easily to be answered, but a solution will be found for sure including the best relation between first-team regulars and our talented second row usually who usually spend the 90 minutes on the bench. These are excited to show what they have to offer on the field in front of thousands of supporters, so that no feeling of half-heartedness has the chance to come up. Players like Schieber, Leitner or Bittencourt are extremely interested in helping the team. According to this, no significant reduction in productivity will occur, no, quite the reverse, it would be a perfect practice for those who are meant to be the future starters of the BVB. Their task will be to replace our recent go-to guys who maybe think about leaving the club sooner or later. By the way, this is a perfect transition to what is always on my mind in these days: Mario Götze. 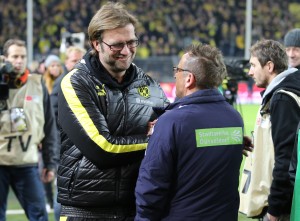 Of course, he should not be the major subject now, but you cannot get along without mentioning the disappointment of his decision to transfer to the club which somehow became our most bitter enemy besides Sch****. When I started thinking about the upcoming match against Düsseldorf, the rock band ‘Die Toten Hosen’ appeared in my mind. They are the most popular, and maybe even the biggest, supporters of Fortuna Düsseldorf. Why is this important? In fact it is not really important for the match on Saturday at 6:30pm, but I feel more and more sympathy towards our opponent when I remember the legendary song of ‘Die Toten Hosen’ being entitled with ‘Bayern’ and taking up one of the irrefutable principles in life: ’So much can happen, so much can happen, there’s just one thing I know for sure. I would never ever go to Bayern München! ‘ This outstanding attitude somehow makes me forget that we should see them as enemies and I cannot avoid thinking that giving away some points to this club and his supporters would not be the worst. Of course, we have to try everything to succeed and to take every possible counter with us, as there is still place 2nd which has to be defended and we furthermore do not want to contribute to a distortion of competition in the relegation struggle. Giving important points for the end of the table to Fortuna as a kind of gift, although we really do not need them necessarily, is no option. But nevertheless, in case of a defeat in the Esprit-Arena in Düsseldorf I would not get mad or angry because a fall of tension in the players’ minds between two way more spectacular and important games is just human. In addition it would be a dramatically better option to lose some points this week than the week after in the top-game against the already mentioned red plague which I do now even more begrudge every single victory that may come in the future after they once again showed that the emotional aspect of football is alien to them, whereas capitalism seems to play a significant role. From this point I once again want to point out the conclusion, that if we had to lose any further game in this season I would choose the one against Düsseldorf without faltering. 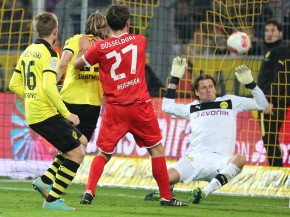 By the way, a win of the Fortuna is not that unlikely as it seems to be when regarding the position in the table (BVB: 2.; Düsseldorf: 15.). The overall statistic is completely equable with 18 victories on both sides and 9 draws. Especially in matches in Düsseldorf our Borussia was not able to succeed very often which is underlined by the fact that only 5 of 24 matches had a happy ending for us. Most of the games included in these numbers lie far in the past, but even the most recent encounter of the teams in the League that took place last year ended with one goal on both sides. As a conclusion we should not underestimate Düsseldorf’s power, although they did not win any points in their last 5 matches this year, because the given numbers and the expected motivation of the red and white players undoubtedly hint at the level of difficulty this match has. Moreover, the coach Norbert Meier can rely on his top-scorer Robbie Kruse again, who had to miss the important match against the Hamburger SV, but is back in training since Wednesday and therefore fit for Saturday.

To sum it up, the following match will be a difficult task for the BVB, because keeping up the tension and concentration between two matches having a completely different importance is almost not realizable. As changes in our line-up are expected, our reservists will do their very best to show the supporters in the stadium why Borussia has a enormously high quality, even on the bench. Something that should not be said too loudly: The fact that we share the rejection of Bayern München with Düsseldorf, which dominates most of my thoughts concerning football after the somehow scandalous revelation of the Götze-transfer, would still give a possible failure in this away-game a more or less positive connotation – Of course only if it does not affect our 2nd place that we want to keep until the end of the season!