It has already been a season full of football highlights for our Borussia. From the group of death with four national champions of which we defeated all of them at least once, to the amazing away performances of our squad and especially our supporters in the Netherland, Great Britain and Spain up to the thrilling ante national cup final in Munich last week - we had it all. But it does not matter how many national champions fielded in the Westfalenstadium this season and it does not matter how many nationals duels on a top level against Munich or Leverkusen have been fought. In the end, there is still one game that is standing on top of it all, a game, that is not comparable to other season games, a game where heroes can be born, a game, that is simply unique: It’s Derbytime! 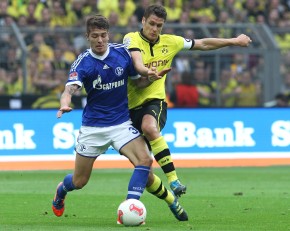 Concerning our Derby performance in the first leg however, I don’t want to speak verbosely as it is nothing pleasant to think back to. In October 2012, S***** had the honor to play in our stadium, winning with 2-1 goals with Affelay and Höger on their and Lewa on our side in the balance sheets. Back then, our Borussia made a nervous, unorganized appearance, suffering from several injuries of Götze, Gündogan, Schmelzer and Kuba. As a consequence, Jürgen Klopp changed the starting formation for – perceived – the first time since ages. By doing this, he completely expected too much from our boys against a determined team from Herne-West. Confidently after a good start into the season with only one defeat in the first eight games, S****** showed a courageous performance and won – although it is hard to admit – well-deserved against our Borussia.

With this victory, a feeling that was nearly forgotten in the past years suddenly came up again: the feeling of a derby loss. Before that day in October, four Derbys were played and three victories were celebrated by our Borussia. It was back in February of 2010 when the guys in the blue jersey won their last match against us. And now, it is even more than ever time for revenge. 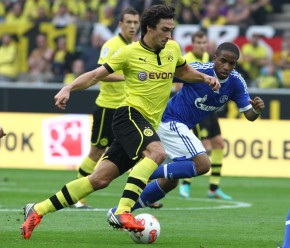 In personnel matters there are still a few question marks left that will finally be answered shortly before the starting whistle. Our central defense around Kehl and Bender is still suffering from their wounds of the champions league victory against Donezk last Tuesday. In fact, both could not join the extensive regeneration training this Thursday. Definitely back on the pitch was central defender Mats Hummels, at least for running units. But will he be fit enought for the most important match of the season after overcoming a persistent influenza? In fact, he would be a possible opinion for the defensive midfield next to Gündogan as Nuri Sahin is still struggling with a training deficit and Moritz Leitner with a lack of match practice. Then, header god Felipe Santana would remain on his position in the central defense.

In the offense there won’t be any surprises. After his good match against Hannover, it is most likely that Kuba will start on the left wing with Kevin remaining on the bench. In the central midfield, Götze will try to make life even harder for S*****, as well as Reus on the left wing. As forward, Robert Lewandowski will stay in the starting formation, degrading Schieber back down to his role as a super-sub. In the 142. Derby Dortmund can write history. Winning in the sports hall tomorrow would mark the third victory in a row in the blue arena, a series that has been achieved last time in the 1960s. In total, the duel balance in the Bundesliga of these two clubs could not be more even. 29 victories for our BVB stand against 28 victories of S***** and 24 draws. With a victory, Borussia could extend this lead in the statistics as well as gaining back the title of “Derbysieger”. So come on black and yellow boys, live down the 20th October 2012 and get our title back!