The chance to make the next step 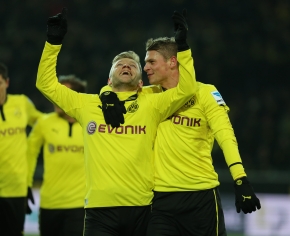 Borussia won the first two matches in the second half of the Bundesliga and had a perfect start into the new year with a result of 6 points and 8-0 goals. This succesful way could be continued by beating Leverkusen on Sunday at 17:30, but this is not an easy challenge as Bayer has already 37 points, one more than our team has. They are the biggest Bayern-pursuer (if anybody can be considered to be that) and with a victory over them, Dortmund could make the next step and take their place in the competition.

The statistics of the last matches against Leverkusen show a quite favourable situation for Borussia as the Werkself was only able to win one of the last 11 encounters. Furthermore, Jürgen Klopp never lost a game in the BayArena where the match will take place this time. But these numbers do not mention that Bayer is in excellent condition this season. It will be hard work to succeed against this team but as Dortmund as well is in good form after the winter-break, there is no reason to be afraid. Especially in away games Borussia showed great performances, the most recent example: The 5-0 victory over Werder Bremen! No other team in the Bundesliga scored more goals in away games and particularly Kuba gave us the impression that our team is still motivated to enlarge the amount of goals by scoring already 3 times in the new year. All other players showed good performances in the last 2 matches, too, for example Roman Weidenfeller who did not let any ball through or our striker Robert Lewandowski. He scored 2 goals in 2 games. 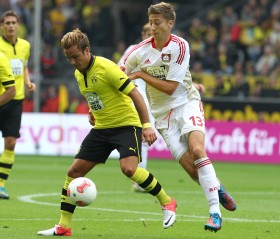 As it will be the top game of the weekend, everyone is looking forward to this encounter full of expectation. Besides the possibility to pass Leverkusen in the league, there is another aspect that increases the excited anticipation of the match: still everybody is enthusiastic about seeing the home-comer Nuri Sahin on the field. He made a good impression in the test against Cologne on Monday and almost scored a goal, only stopped by the upright. There is no question about the fact that Bender, Kehl and Gündogan are excellent on the position in the defensive middlefield, but nevertheless it would be a great thing to see Sahin in the line-up so that he could have the chance to reach the hearts of the supporters once again by helping Borussia to win the game, as he did so many times before.

His position in the line-up is not very likely because there are these three players who I already mentioned having better chances to stand on the field from the beginning on. Besides this luxury problem in the defensive midfield, Jürgen Klopp does not have to face other great difficulties with the line up, because Sebastian Kehl, Lukasz Piszczek and also Marcel Schmelzer and Robert Lewandowski, who had suffered from illnesses and injuries, were back in training during the last days, 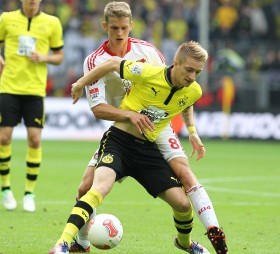 which means they are able to participate in the match. Only Neven Subotic is not completely back in form for Sunday and stays at home, but he is expected to join the team against Hamburg next week.

All in all, day 20 of the Bundesliga season 2012/13 will be important for Borussia Dortmund as we have the chance to come closer to our aim: The qualification for the Champions League Season 2013/14. By beating Bayer Leverkusen a step in the right direction would be made, as Dortmund would then be on the second place in the league. But in case of losing, the distance to that place would grow, and the distance to Frankfurt (if Frankfurt would win) would decrease, as both would have 36 counters.
But as we are all optimistic about the result of the match, because Dortmund did not give us any reason to question their qualities and will to win, we can ask us: If we can pass Bayer Leverkusen, why shouldn't we pass Bayern München too? In football everything is possible.