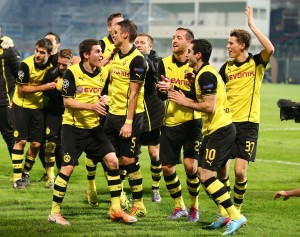 What a night, what a match. Once again, Borussia Dortmund did not allow their supporters to have a relaxed evening at home or in Southern France, witnessing an easy advancement to the round of the last 16 in UEFA Champions League. It could have been so easy: A victory away at Olympique Marseille was enough to overcome the tough challenge that was group F no matter how Napoli played against Arsenal FC. The Italians, however, won (2-0) which meant Borussia needed to get a victory as well, otherwise they would have been out of the Champions League and would have tried their very best in the Europa League. Eventually, they overcame the odds with a late victory at the end of an evening which could have caused several nervous breakdowns for the supporters in black and yellow. It somehow even was a memory at last year's already legendary match against Málaga even though the match in the quarter finals in spring was even more intense and thrilling. But at least, it was something like it. A little Málaga.

Of course, personal issues and injuries were a problem for Borussia once again. With Bender out and Friedrich not being able to play, Klopp needed to improvise one more time... and he surprised us with the debut of 18-year-old and very talented center back Marian Sarr. Sarr came to Dortmund from Leverkusen one year ago and went on to play for the reserve and youth team where he lacked to show all of his potential. 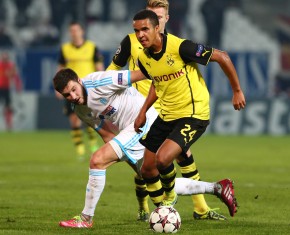 Therefore, Klopps move may have looked a bit risky, but it was the right one since Sarr played a good match and underlined the fact that he could be an alternative. Fortunately, Nuri Sahin who was substituted against Leverkusen on Saturday was back just in time for the match in Marseille so that skipper Sebastian Kehl could replace Sven Bender. The rest of the team stayed unchanged. Sokratis beside Sarr, Großkreutz and Durm on the defensive wings, Reus, Mkhitaryan, Kuba, Lewandowski. Marseille released their head coach during last weekend because of the recent lack of success in both Ligue 1 and Champions League and therefore were pretty motivated to leave the European competition with some points. Up to match day five, they lost all of their five matches in group F.

The match could not have started any better. Less than three minutes had been played when Erik Durm assisted Robert Lewandowski with a nice high ball from the midfield. The Pole took control of the ball, stormed into the box and lifted the ball over Mandanda, the goalkeeper got out of his goal to shorten the ankle for Lewandowski, but had no chance to save the ball. 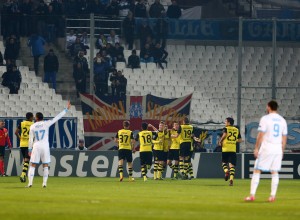 The striker was too smart and too cold to leave this chance unused and Borussia was in the lead very quickly. It was a goal which seemed to be of big importance because an early lead could give Borussia security and Marseille a reason to lose some moral. However, this is just theory and the match did not develop the way you could have imagined after this 1-0 even though the 3.000 supporters who travelled from Germany to France had something to celebrate in the beginning. After Sahin tried to double the lead but missed the goal by a few meters (10th), a free kick was awarded to Marseille on the left side of the pitch. It was brought into the box where Roman Weidenfeller decided to leave his goal and go for the ball. However, he missed it, leaving the opportunity for Khalifa whose header only hit the crossbar in something similar to the famous Wembley goal. The ball came to the ground just inches in front of the goal line but Diawara was there to take the advantage and head the ball into the goal for the equaliser (14th). However, at the moment of Khalifa's header, Diawara stood off-side so that the goal should not have been awarded to Marseille. Fortunately, that did not matter eventually but it definitely was something which changed the momentum and the rest of the match. Bad luck for Borussia with the referee from Croatia – not for the first time this season that BVB met a referee not being able to do his job.

Borussia was in a kind of shock and Marseille got better into the match and defended well. Dortmund had problems finding their way through the defense even though Kevin Großkreutz was on his own on the right wing very often but ignored by his team mates. It is only fitting that one of the rare chance of the guys in black and yellow was created from the right wing when Kuba sent Lewandowski on his journey who assisted Marco Reus but our number 11 did not hit the ball like he intended so that this was not a real danger for the French goal (31st). But the following two minutes were of bigger importance because Dimitri Payet got into the focus of the match. First, he fouled Kuba and got booked in minute 32. Then Payet got the ball in the box and was only stopped by a tackling from Nuri Sahin, who may have touched Payet but hit the ball first. A whistle could be heard, many fans feared that the referee would hand Marseille a penalty kick, but instead, he sent off Payet because he called a dive. It was the best call referee Strahonja made in the entire match. Although the second yellow card for the dive may have been a bit harsh, it was a right decision not to award the penalty to OM because Sahin clearly hit the ball in first instance and only then slightly may have touched Payet. Borussia found themselves with one man up for the rest 55 minutes of the match. This should boost their momentum, don't you think? Well, except a good shooting opportunity by Kehl – which was blocked (42nd) – Borussia did not create any danger in the remaining ten minutes of the first half so that the two teams got into the break with a draw. However, Borussia was under the last 16 at this moment because Arsenal drew Napoli 0-0 at half time. 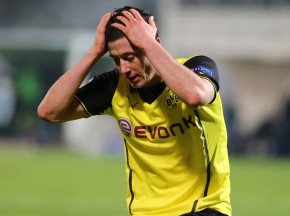 However, coach Klopp used the time during the break and motivated his squad so that the team in black and yellow got more and more offensive situations during the second half but missed efficiency in using their opportunities. Too often, they tried to run the ball into the goal instead of giving a shot a try, too often, they dribbled into the next opponent instead of shooting the ball onto the goal. And if Borussia did everything right, Mandanda was there to save the ball. Just like in minute 57 when a cross from the right by Großkreutz found Erik Durm at the second post whose header from three meters was brilliantly cleared by the goalkeeper with an incredible reflex. And if it wasn't for Mandanda, it was for the post seconds later when Marco Reus got the ball at the edge of the box and only hit said post with his nice shot. It was unbelievable but only the start of a series of good opportunities which were not used by last year's finalist. The best one was given away by Robert Lewandowski who got into a return pass by Diawara, controlled the ball, dribbled around Mandanda and just had to score but missed the goal by inches (67th). Nobody knew why Borussia was not in the lead during the second half and when the bad news came from Italy that Napoli was leading against London, you had to start thinking about leaving this competition after the group stage. But more chances were given away, joker Hofmann assisted Marco Reus from the now frequently used right wing but Reus shot the ball into the sky instead of into the goal. Marseille only defended during the second half with Borussia storming and storming but not scoring. Klopp also brought Julian Schieber and Piszczek to create more danger but it was no use. Even with one man up, Borussia had problems creating chances (and using it) because the French defended with their remaining ten men.

And when you have bad luck, the referee is not on your side as well. Therefore, instead of awarding Borussia the deserved penalty kick when Mandanda fouled Lewandowski in the six-yard box, he decided that Lewandowski was the one taking the foul for whatever reason. Ridiculous, but fortunately not important in the end. Then, minute 87 arrived. When you do not use the best chances... very often, football is very harsh and you lose the match. This time: when you do not use the best chances, you use the most shitty of them. Mkhitaryan gave the ball to Julian Schieber who found Kevin Großkreutz at the edge of the penalty area. Großkreutz does not hit the ball right and even slips during his shot but somehow, the ball finds its way through the French defense, Mandanda gets his hands on the ball but is not able to save it. 2-1 Borussia, what followed was pure emotion and relief. 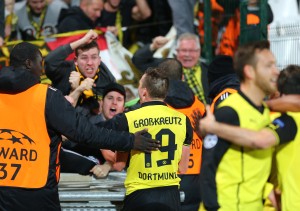 Großkreutz of all players deserves it the most. He played a great first half of the season with hardly time off, replaced Piszczek brilliantly and now is there to shoot Borussia in the round of the last 16. Therefore, the Dortmunder Jung directly stormed to the away fans and celebrated his goal with them and the team. Great emotions, great relief, and thank god, the lead! And just like against Málaga when our opponent scored a goal from an off-side position Julian Schieber assists the decisive goal. Hofmann even had the chance to double the lead during injury time, a little time of trembling followed, but Borussia made it over time and therefore got the more than deserved win.

Phew. What a tough group stage. It is quite telling that Napoli misses the round of the last 16 with 12 points... No team suffered that fate before and teams like Zenit St. Petersburg qualified for the next round with six points. This is just ridiculous but shows how hard it was to overcome this tough group. And Borussia even won the group and now avoids opponents like Real Madrid or Barcelona! Great news everywhere, at least at the very end of this evening which cost many nerves to break down. But that does not matter. Borussia stays in the Champions League thanks to Kevin Großkreutz. What a great fairytale, underlined by the pictures of the players singing the supporter's songs after the match along with the fans who travelled to France for the last match. Thank you, Borussia. Thank you, Kevin Großkreutz! Dortmund loves you and you are a true and deserved hero!

Subs: Hofmann for Blaszczykowski (66th), Schieber and Piszczek for Kehl and Reus (78th)