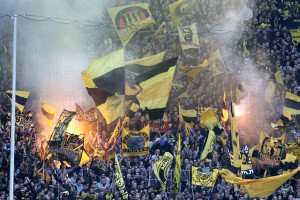 There are no words, neither in German nor English nor any other language, that could in any way describe what has happened yesterday. We all knew it, we’ve all hoped for it, but to actually BE German champion, again, is quite a different thing, although I guess we’ll all need some more weeks to fully understand that this has really happened.

Since our Borussia was eight points ahead of the second in the league, Bayern Munich, there was a possibility to be German champion even before the game against Mönchengladbach had started. Bayern played against Bremen at 15:30 CET and the BVB’s match was planned to start at 18:30 CET. Of course, this set the agenda for Saturday afternoon: Go to your favorite pub, order a beer or two and watch the Bayern play. Honestly, it wasn’t that much of amusement because it was a mediocre game. As Bremen scored the first goal in minute 51, it was kind of a weird feeling. Yes, this meant we were champion, and indeed you could feel the joy, people started celebrating. But somehow it didn’t feel right to become champion just because Bayern had given up on the league, not fielding their best players and playing as if they just didn’t care and thought of the Champions League match against Real Madrid only.
I assume that lots of people in Dortmund haven’t seen the most important minutes of that game that followed because the way to the stadium needed extra-time on this special day and the TV screen was to be left early to be at the stadium in time. The city was crowded with people wearing black and yellow already by noon, beer was sold at every corner of every street, and hot dog stalls occupied those street corners where no beer was sold. Everybody in Dortmund was ready for the big party!
And what a surprise when I arrived at the Westfalenstadion to find out that Bayern had won the match 2:1. We weren’t champion yet. Our match and our will to fight and win would decide on the German championship. We needed to win against Gladbach! 105 more minutes till the party starts. 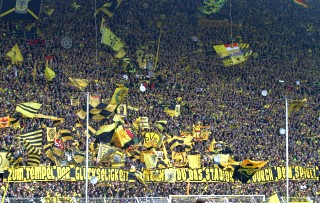 In contrast to last Saturday, Neven Subotic returned to the pitch. We had to win this match without Kevin Grosskreutz who broke his nose during training. Ivan Perisic was the one to replace him. Good choice!
So here we had number one of the German league against number four, both equipped with high class defenses. The match started with a more passive Borussia Mönchengladbach and our BVB having the first chances with Lewandowski (10th) and Kagawa (14th) who brought the ball in front of the goal. The two were also the one who rose hopes high in minute 20 – but Kagawa hit the left post and Lewandowski’s rebound was blocked. And only three minutes later, finally, Perisic headed the ball into Gladbach’s goal after a free kick by Marcel Schmelzer. The stadium burst with joy, chants and people hugging and kissing each other, jumping and singing and celebrating. Dortmund, 18:53 CET, and our BVB was German champion – as long as Mönchengladbach didn’t score.
Which is exactly what they did! During the next part of the game our boys didn’t manage to play consistently enough to force the final decision. So in minute 34, Hanke (of all players Hanke! The guy used to play for Blue-White…) scored for Gladbach and sent us all to 10 seconds of shock – but luckily the referee decided that Daems before was in an offside position. Thank God – still leading 1:0, still champion. Then, in the 37th minute, Mats Hummels missed another great chance after a corner kick when Gladbach’s goalie ter Stegen warded off his shot.
The break finally was a good opportunity to get some more beer – because actually it wasn’t decided yet whether to drink it for celebrations or to calm down the nerves. As I said, until then it was a day of mixed emotions. 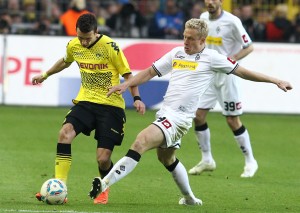 The second half started the same way as the first had ended: Our boys had better ideas and more possessions, but somehow the final shot was still to be expected. On the other side, there was Marco Reus, soon to be a team mate of our Borussia, who attempted to spoil the party as last year. He received a long pass, left Weidenfeller without a chance and in the end it was Schmelzer who stood on the goal line and saved us (54th). For the second time in this game, Schmelzer played a crucial role. And definitely not for the last time: His pass to Lewandowski started the counterattack that led to Kagawa scoring an awesome 2:0 in minute 59 and making us the new old German champion. From that moment on, there was absolute craziness in the Westfalenstadion. And to be honest, I don’t remember much of the last 30 minutes of that game, but I’m sure I’m not the only one. Later on TV I saw the heart-warming celebration on the pitch after that goal, with Jürgen Klopp running towards Shinji and hugging him with the whole team to join.
Some sources say that after this goal, Mönchengladbach tried harder to score and had two chances to do so in minute 67 and 69. After that, it must have been pretty obvious that nothing could change the result of this game. Shortly afterwards, Ilkay Gündogan and much celebrated Shinji Kagawa were substituted by Moritz Leitner and – finally! – the long missed Mario Götze who played as if he’d never been absent for such a long time.
With the final whistle, the next dream had come true, as if the last two seasons with our Borussia hadn’t been enough: German champion of 2012 is Borussia Dortmund. Again. 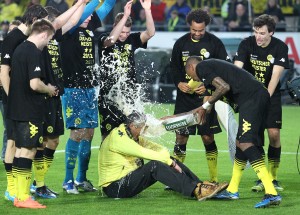 I guess it’s impossible to report everything that happened after the game, on the pitch, around the stadium, in Dortmund city, in the media.
In the Westfalenstadion, black and yellow supporters couldn’t get enough of celebrating together with the team. On the pitch, it looked more or less like a big family party, with all the player’s children and girlfriends/wifes being there. Marcel Schmelzer was so excited that he accidentally ran over Sebastian Kehl’s son and almost turned a somersault – fortunately nothing serious happened apart from the boy having to be comforted by his dad. When the ranks slowly but surely emptied, the Südtribüne was still overcrowded. And in between the rest of the almost empty ranks in the rest of the stadium, there were single supporters to be seen, still sitting there in absolute amazement, some even crying, staring at the pitch in disbelief. And seriously, who would have imagined to have such an end of the season. Remember the time in early autumn last year when Bayern Munich was ahead of us by 8 points.
Outside the stadium, Dortmund itself was a crazy mess. People were buying beer as if there was no tomorrow, drunk people were falling out of driving taxis which played “We are the champions” on full volume. Supporters dressed completely in black and yellow stood on balconies, rooftops, at windows and on every street. Dortmund is always black and yellow, but on Saturday evening the city has proved that it is indeed the capital of football. At some point, the weather decided to stop the festivities outside as pouring rain started. The party continued in the bars and pubs of Dortmund, with the boys of BVB supposedly joining in later.
As TV showed a pretty tipsy Jürgen Klopp in an interview later, one can only imagine what this party was like. And seriously, who deserves better than this awesome team? 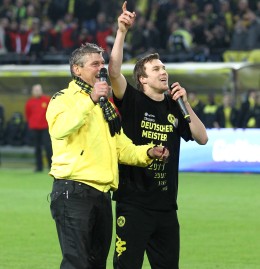