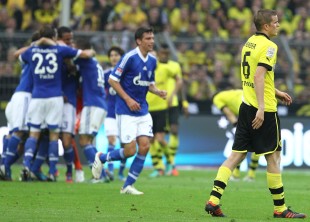 A day during which towering and strong header of the ball Felipe Santana loses a tackle in the air, cannot be good as a matter of principle. And so the following is quite logical: BVB lost the derby with 1-2 and also lost the connection to the top of the league with a total points of 12. In the final analysis there are many reasons why, but BVB didn't lack will and morale. A team that was anxious because of a new formation, many casualties and the early goal for the guests gave everything until the final whistle – but could not turn the match around.

Because of the international break both Ruhr area clubs had more time than common, to get excited before the derby. Still it remained quite calm before the match, and no one of the responsible persons seemed to inflame a fire more than necessary. The only verbal clash developed between Watzke and sausage supplier Tönnies, who criticized Klopps body language inappropriate and therefor was immediately reminded who did not carry the Schale for a lifetime and will not carry it.

BVB didn't start in the familiar 4-2-3-1, but rather in a 3-5-2 formation, especially because four substitutions had to be done: Moritz Leitner replaced Mario Götze (muscular problems), while Ivan Perisic started in stead of the sadly missed Kuba (ankle injury). Großkreutz came in for Schmelzer because he didn't recover in time. Our playmaker Ilkay Gündogan also missed the match, he was replaced by skipper Sebastian Kehl.

The blue neighbor started in the same formation as always: 4-2-3-1. Also Huub Stevens had to fear for several players due to injuries. Different from us the situation eased: Christian Fuchs was able to start and it were only Julian Draxler and the sick Papadopoulos who could not travel to Dortmund. Uchida started for the Greek defender, Draxler was replaced by Afellay. US international Jermaine Jones remained on the bench – at last BVB had already enough casualties.

Already in the first minutes it became clear, that Jürgen Klopp chose a new tactical formation, in which Subotic, Bender and Hummels built the defense. Thus the midfield was broadly conceived, though Piszczek on the right and Großkreutz on the left worked backwards to support the back three and to stop the good play of Scha*ke via the wings. Scha*ke needed ten minutes to adapt to the BVB formation – this was why a contested match without any scoring opportunities and without any advantages for one team emerged. This changed after 15 minutes when Afellay used a headed lay-off by Kehl to make it 0-1 with the help of the inside of the post. 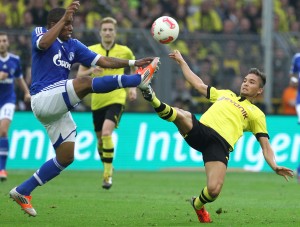 BVB became more and more insecure, the new formation didn't help to show the usual pass strength and defensive work the supporters of the German champion are accustomed with.

Fortunately the guests didn't know what to do with the dreadful mistakes that were made while the build-up. A more harmless header by Huntelaar (30.), who had less touches of the ball during 90 minutes then goalkeepers Roman Weidenfeller and Lars Unnerstall, and a harmless shot by Reus remained to be the only scoring opportunities worth mentioning. While Borussia was lacking vigor in the offense, it became dangerous in front of the teams goal for more than one time. Even the return to the 4-2-3-1 formation with Piszczek as left-back and Bender as right-back didn't change anything initially.

The BVB fans, who were supporting their team noisy and desperate because of the imminence of a loss, were not able to help the team to gain more security. Totally undeterred the Südtribüne turned on the gas again and again – even after falling behind – the atmosphere didn't calm down. Then it was the very fussy Brych, who didn't have any problems during the first half, who blew the half-time whistle. Of course an increase was needed to turn the match around.

The second half started disadvantageous – namely with the second goal against BVB. Dortmund moved up way too wide and lost the ball frivolous during build-up. After a pass by Farfan Höger was able to march towards Weidenfeller without any resistance and had only to chose in which part of the goal he wanted to score. Klopp reacted quickly and Schieber was substituted in for Perisic – the change was profitable, after a free-kick by Reus Robert Lewandowski scored via head in minute 55. Schieber was fouled. 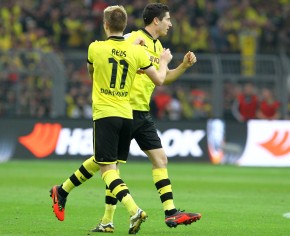 After the goal the fans woke up again and supported the depleted team passionate. Besides Klopp strengthened the offense one more time and brought in Leonardo Bittencourt who made his debut in German Bundesliga. With his speed and his reputable performance he commended himself. The weak skipper Kehl left the pitch for Bittencourt.

Except for a shot by Reus that only hit the side netting, Borussia Dortmund further on remained harmless during the last third of the match. The reasons: A vast number of mistakes and turnovers during the build-up and a missing ball-winning ability, we haven't seen for a long time. In the end the team of Klopp only won 43% of its tackles.

On the other hand Scha*ke focused on ball possession, counterattacked every now and then and wasted time through pretended injuries (Unnerstall, Holtby). Scoring opportunities were rarely but quite dangerous. A shot by Affellay was saved by Weidenfeller (minute 71) as well as a shot by Huntelaar (minute 90.)

Even during the four minutes additional time – in the meantime Jones entered the pitch and called attention to himself with a foul – Borussia could not avert the loss. Also the substitution of Santana as a striker didn't change anything – the Brazilian fought for every ball but as a matter of fact lost a header and was called of by the fussy Brych for more than one time.

Jürgen Klopp: “Thank you to every single visitor who was here today. It was outstanding how we were supported until the end of the match. We didn't play well today. We tried to have regard to our personal situation through a formation change, but played too many bad passes in the beginning. This was why tried to give the team security through a further formation change. Then we allowed two counterattacks, something that was not supposed to happen. After our goal we were not able to build up the match safely. This is the reason why we didn't have any scoring opportunities even in the phase we were superior. This was a deserved win, I'm really sorry for everyone, but we will try to change it quickly. We have to improve quite everything to gain something on Wednesday.ir

Huub Stevens: “We were quite surprised that Dortmund started in a unfamiliar formation but we adapted to the style of play quickly. After the tactical change of Dortmund we played too many long balls and were not that good than before. The second half starts brilliant. From this point on you know that you've got a chance today. After the free-kick it becomes though again but we fought and deserved the win."