Three Casualties but only one Point 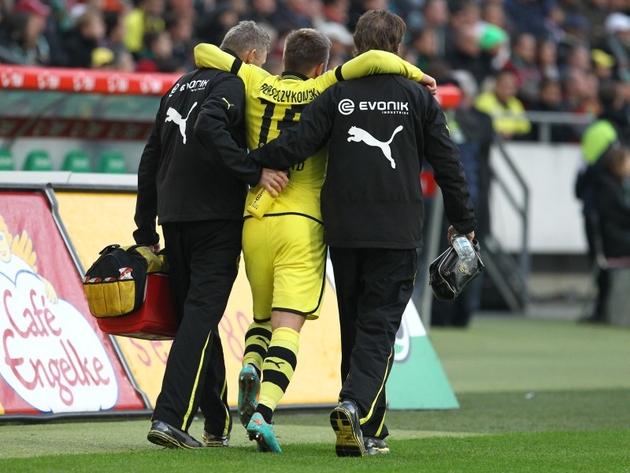 On days like yesterday you better stay in bed, at least for the second half. The clash between Hanover 96 and Borussia Dortmund ended in a draw. The 90 minutes were an up and down in which injuries and referee's decisions paved the way for the outcome. But more of it later..

Due to a compression of the lumbar spine Ilkay Gündogan suffered during the match in Manchester, coach Jürgen Klopp to replace the German international. Instead of him, skipper Sebastian Kehl was back on the pitch and built the center of the midfield together with the reinvigorated Sven Bender. Apart from that Klopp left the starting XI unchanged. Both teams operated in a 4-2-3-1 system.

Only 15 seconds were played when it became highly dangerous for the first time. A cross from the right wing by Mario Götze found the head of Marco Reus and it was only Ron-Robert Zieler who prevented Hanover from falling behind. Generally Black and Yellow began with a high pressing which gave 96 a rough beginning, but Borussia Dortmund did not have to wait long for the answer. After 5 minutes played, Sobiech's shot from the right side of the box was deflected by Subotic and Roman Weidenfeller needed all his talent to save the ball. 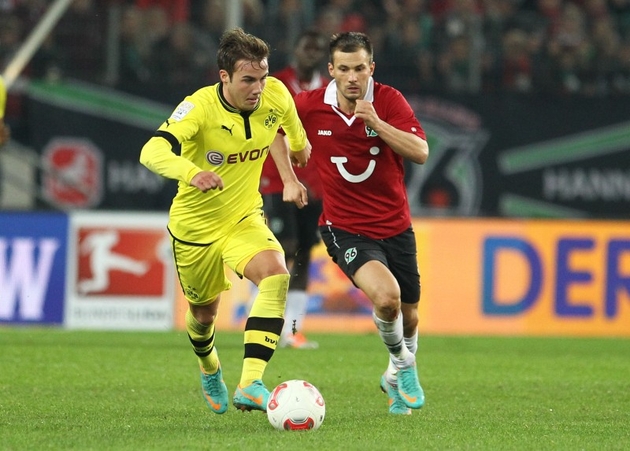 When 9 minutes were over, the first moment of shock occurred. Sobiech hit Kehl with his elbow in the face during a challenge and everyone thought of a horrible face injury. Fortunately the skipper was able to go on with only a small wound above his left eye. Back to the important stuff: 26 minutes were played when the 10,000 fans which supported their team in Hanover, could celebrate for the first time. Sebastian Kehl passed the ball to Lukasz Piszczek, the Polish entered the box and squared the ball to his fellow-countryman Robert Lewandowski who scored. 1-0 Borussia!

The goal prefaced the strongest phase of yesterdays game and it was Kuba in minute 29 who missed the opportunity to make it 2-0 for our colors. Marco Reus passed the ball to Lewandowski and the striker bowled the ball to Kuba. Unfortunately the skipper of the Polish national team missed the goal only closely with his left foot. This happening was simultaneously the last action of Kuba due to an ankle injury. According to Kuba he will be out of action for 6 until 8 weeks – damn it! In minutes 38 and 45 Hanover 96 had clear scoring opportunities which could only be saved because of a brilliant Weidenfeller and the quick-responsing Piszczek and Hummels. Take a deep breath. Halftime.

Defender Mats Hummels did not return to the pitch when the second half started. Due to an ankle injury he was not able to play on. After the match Hummels said: “It is blue but not swollen, I think we will get it right.” Lucky you! Borussia started the second half quite promising and it was once more Lukas Piszczek who hit the left post with a shot from about 16 meters. In minute 53, only one moment later, Mario Götze dribbled around goalkeeper Zieler but did not manage to score the 2-0 lead. 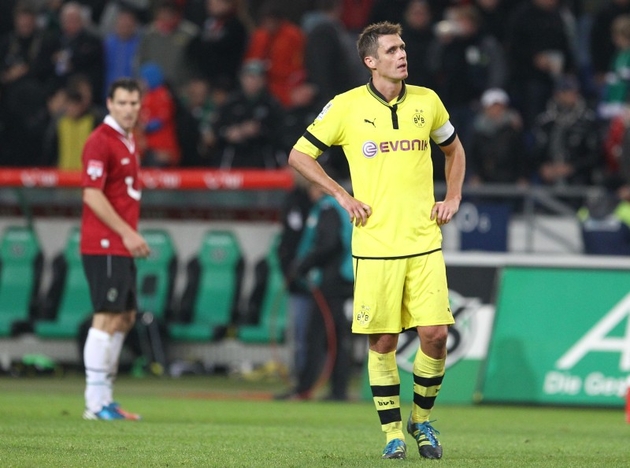 It was then when Hanover 96 took the leadership and forced back Borussia Dortmund. The home team already celebrated a goal by Eggimann in minute 54 but was stopped by referee Gagelmann who detected a foul by Ya Konan. The Ivorian pulled over Marcel Schmelzer before the corner. A though but absolutely right decision. After 60 minutes Roman Weidenfeller showed once more that he is in a brilliant shape. Piszczek tried to clear a cross by Schlaudraff from the right wing but deflected the ball. Weidenfeller saved the ball with a word-class reflex. As if two injuries were not enough for one match, striker Diouf hit Sven Bender in minute 74 with his shoulder in the face. The quite dizzied Bender had to leave the pitch and Moritz Leitner replaced him. All the best to you Manni!

Diouf was also the protagonist of the next happening. In minte 78 Konstantin Rausch's cross from the left side found Diouf who only had the empty goal in front of him. Somehow he managed to find the arms of Weidenfeller only three meters in front of the goal! After 86 minutes played the passive behavior of Black and Yellow was punished. A free kick by Huszti was deflected to Diouf who scored the equalizer. During additional time Marco Reus was fouled by Karim Haggui and to the amazement of everyone, the decision for penalty was not made by Peter Gagelmann! What a screwed-up day!

All in all one can say that the draw is fair. Borussia Dortmund dominated for long periods during the first half but was knocked out of its stride because of several injuries and the following substitutions. Hanover 96 deserves the point because of a courageous second half. Let us hope that the injuries are not that hard and that we will strengthen ourselves again!

Man of the Match: Roman Weidenfeller. Showed once more in which brilliant shape he is and it was only his performance which held the game open for such a long time.

Referee: Peter Gagelmann had though work to do and his decisions were not always right. But sides suffered from his bad decisions, when Marco Reus was fouled during the additional time, he had to call the penalty.

Substitutions: 67. Diouf for Sobiec, 77. Abdelloue for Pinto, 81. Sakai for Cherundolo – 39. Großkreutz for Blaszczykowski, 46. Santana for Hummels, 74. Leitner for Bender.