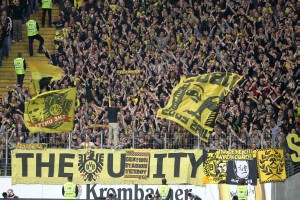 It almost sounds ridiculous if you think about it or even say it out loud. You score five goals in two away games within four days and how many points do you take home? One! One lonely point. What had happened there?
Right, our oponents have scored three goals each, in other words- we actually got six goals. So the question is: what is wrong with our Borussia from Dortmund? It can't really be the offense, because you would assume that three away goals are enough to actually win a game. Has our defense really lost all their talent and ambition? Some of our players are- most certainly- in bad shape at the moment- but that can't be the answer to everything. So let's take a look at our game first and then think about our problems.

Jürgen Klopp rewarded Perisic for his two goals against Hamburg and his abition in the second half of the game and gave Götze a break instead. For Götze, Kuba came into the game again. Since Gündogan still wasn't feeling 100 percent, Leitner took over his position in the center again. 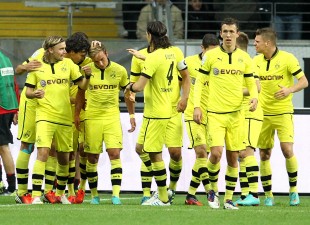 Our oponent on this Tuesday was noone else than the promoted team from Frankfurt who had gained 12 points out of the past four games. Quite an achievment for a team that had played the second Bundesliga the year before. And Frankfurt showed little respect or rather great ambition to continue this run against us as well. Dortmund, on the other hand, didn't seem very impressed as well and hence the game was mainly played in the center of the pitch- chances rather limited or- let's say- not existing.

But suddenly, when you expected it the least- it was our Polish lad Piszczek who decided to sprint down the line on the right, then pulled into the penalty area and hammered the ball onto Frankfurts goal. Or so it seemed- since he rather hammered the ball onto Anderson, who, by this, forwarded the ball into Frankfurts goal, goalkeeper Trapp had no chance. And it got even better. Only a couple of minutes later it was again Piszczek who ran down the line on the right, passed the ball perfectly into the middle, where Reus scored the 2:0 with a perfect shot from 20 meters distance. 2:0. It 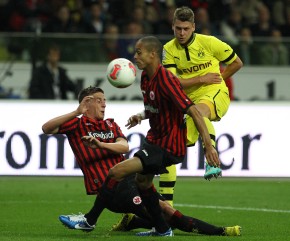 looked like our players had learned from their mistakes from the game against Hamburg. At least, so it seemed. Frankfurt didn't give up and in the last 10 minutes of the game Meier had two good chances to score for Frankfurt. However, he missed the goal by a couple of inches and Subotic was there to clear the second ball after Weidenfeller had an insecure moment. After 45 minutes it was time for a well deserved break.

For a neutral football fan, the second half of the game was simply great to watch. Even for a Frankfurt-Fan it must have been a lot of fun. For us Dortmundfans, however, it was another- well- not quite nightmare, but another disappointment after the match on Saturday.After Reus had tiny problems with his ankle, Götze came in after the break. Our lead, however, only lastet five more minutes. Our players had a two minute breakdown between the 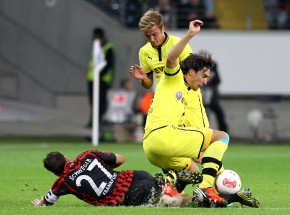 49th. and 51st. minute of the game and suddenly the score was 2:2. How could that happen? After a great pass by Inui, Aigner scored a good goal from the right hand side of the penalty area. And only two minutes later it was the other way round. This time Aigner forwarded the ball onto Inui, who headed the ball behind the goalline- draw.

The great thing in our team is: we are hardly ever impressed. If we get a goal? We make another one instead. Again this time. Götze, appeared to be rather agnry about this sudden brace and simply scored the 3:2 for us only three minutes after Frankfurt had drawn the score. It has to be said though, that Anderson made a terrible mistake, trying to clear the ball in the penalty area, Götze simply stole the ball away from him and scored. Something that seemed to bother Anderson for a while and so he simply headed the ball into our goal in the 73. minute of the game, in order to create some redemption for his mistake earlier. Oh boy Borussia. Three goal again? Really? I have to admit, I have seen games that were more boring than our last two, but then again, I have seen games that were more fullfilling than these last two. In the end, it was a well deserved draw. Frankfurts effort was rewarded and our- well- stupidity maybe? was punished. 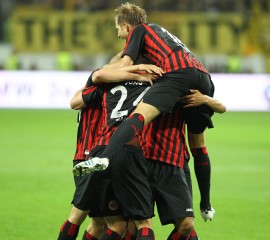 It cannot be, that we score three away goals and are in a two-goal lead by halftime and then get three goals in return as well. Klopp has pointed out after the gae that the team had gone through various phases since he has been coaching here, and assured that they would overcome this phase of rather bad defense work, as well- let's just hope they will do that soon.
All in all it has to be said, that our defense is not the only problem. We loose the ball way too easily and than lack the ambition to run after the ball and the opponent players as well. Something in the communication is not working well and our boys definetely need to sort this out. On Saturday we will await Gladbach at home. Let's do all that we can in order to support our guys to a victory again. Maybe even one where we don't get any goals ourselves. 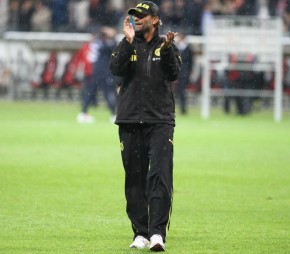