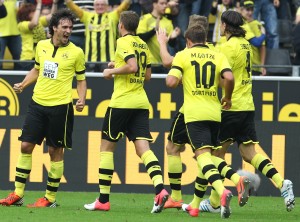 Against all expectations, it looked like the international break arrived at the right moment. After the last match in Nuremberg, where things on the pitch did not look so smooth here and there, Dortmund presented itself in an excellent condition and defeated a lame squad from Leverkusen without any problems and 3:0 goals. Borussia was the clearly superior team this saturday evening with effective and dominant offensive play, letting Bayer no chance to jeopardize the victory for our squad in any single moment. A performance that makes confident for the upcoming tuesday, when Dortmund will welcome Ajax Amsterdam for the first group match of the Champions League season. Additionally, the victory against marked another impressing fact: Borussia Dortmund is now undefeated for 31 games in a row, lets make it 32 tomorrow!

Compared to the match in Nuremberg, Juergen Klopp changed the line up in two positions: For Marco Reus, who came back with a foot bruise from his week with the international team, Mario Goetze gave his season debut in the starting formation. Also Ivan Perisic had to go back on the bench, for him Kevin Grosskreutz fielded. Bayer Leverkusen with their coaches Sascha Lewandowski and Sami Hyypiae came to Dortmund with one victory out of two games and substituted Hegeler for Rolfes in the starting formation. 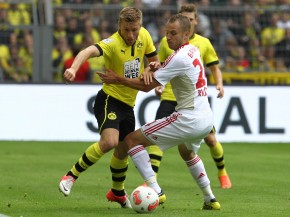 Under the umbrella of the initiative “Geh deinen Weg!” (Go your way!), an integration project of the German foundation which was supported by the Bundesliga by placing the initiatives logo on each of the 18 clubs’ jerseys this weekend (just in case you wonder), Dortmund only knew a single way this afternoon: the offensive one. Right from beginning, Dortmund pushed Leverkusen in their half with intense and fast offensive football. Where Leverkusen striker Kießling successfully tried to cover Hummels in order to avoid his support in the game build-up, especially Kehl and Guendogan were the initiators in the midfield with several nice passes in the spearhead and to the wings. Schmelzer – who had a very hard time against the selection of Austria under the week – failed to score from the half left side after a beautiful pass from Guendogan (3.). After a nice cross from the very motivated left defender, Lewandowski and Kuba both missed the ball closely in the centre of the box (8.).

Leverkusen could only run after in the first half of the match. 80 percent ball possession for Borussia in the first ten minutes proved the sovereign Dortmund play. However, Leverkusen adjusted right after by attacking Dortmund even earlier in the midfield and as a consequence developing their first opportunity in minute 13., but Bayer striker Kiessling could not benefit from this first chance. Dortmund remained the more active team but except one distance shot from Goetze (22.), Leverkusen goalie Leno was not challenged often due to Bayers good tactical positioning in the centre of the pitch and the prevention of the Dortmunder play over the wings. After roughly an hour, a corner kick had to provide the lead for our BVB. With gentle support of a catastrophic placed Bayer defense, Hummels could head in Schmelzers corner kick completely free at the second post from a five meter distance (29.). After the lead, Dortmund relieved the pressure a little bit and successfully tried to control the game with long pass series and dangerous balls to the spearhead at the appropriate moment. Their game got rewarded in minute 39.: Lewandowski holds the ball in the midfield and passed it to the sprinting Piszczek on the right wing. His flat cross-pass in the box let Goetze pass intentionally to the better placed Kuba who finished this beautiful move with a strong shot from short distance - 2:0 – halftime. 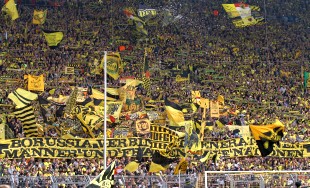 Leverkusens coaches reacted during the break by substituting the more offensive Bellarabi for Kadlec. However, it did not change much: Our young squad controlled the game and continued their offensive play without taking high risks in the defense. Again it was Kuba (46.) with a dangerous shot on the goal of Leno. In minute 60., Reus replaced the strong, but still not at 100%, Grosskreutz. After an again good corner-kick by Schmelzer, Subotic failed to score after a good save from Leno (62.). At this time, it nearly looked like Leverkusen already accepted the upcoming defeat and missed to show some kind of offensive reaction. A shot from Sven Benders twin brother Lars (50.) marked their only offensive effort in the second half. In contrast, whenever Dortmund increased the pace, the Bayer defensive had serious problems. Although they could defend the attempts of Blaszczykowski (68.) und Piszczek (76.), the third goal was again scored after free-kick. Lewandowski profited from a nice kick of Reus and headed the ball for the 3 -0 and his first goal of the season. In the end, Perisic, who replaced Goetze in minute 69., proved his intentions to be part of the starting formation again, but his header after another beautiful corner kick of Schmelzer this afternoon just hit the cross bar and then jumped from the line out of the goal. 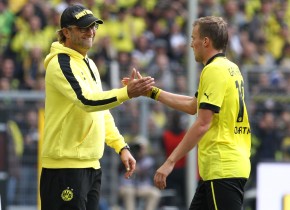 With a superior performance against an admittedly weak opponent from Leverkusen, Dortmund kept the connection to the top of the table and is now on position 5 with 7 points out of three games. The match against Leverkusen also marked the beginning of a series of international games. Already tomorrow evening 8.45 p.m., Dortmund has the chance to get three big Champions League points against Ajax Amsterdam before they have to play in Hamburg on saturday. However, with an impressing series of 31 undefeated games in a row and the confidence out of the performance against Leverkusen, I am sure that we will extend the series to game 32 and 33.