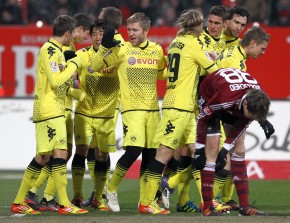 There isn’t really much to be said about the game itself but so much more about everything around it. It was cold, very cold. It wasn’t pretty but a piece of hard work and at the end of the week, we found ourselves at the top of the table, having repeated once again what we had done for the last three games in a row: beating Nuremberg 2:0.

If you have ever heard of “Groundhog Day”, you may know that there is a tradition in the US state of Pennsylvania where a small rotent called “Punxsutawney Phil” supposedly predicts the end or continuation of the winter every year. On Tuesday, said rodent predicted another 6 weeks of cold and snow and at least for Germany and Nuremberg, Phil was right. Game night in the south of the country featured a chilling -11°C (12 Fahrenheit). There’s also a movie with the same name, featuring Bill Murray who is forced to relive the same day over and over again. Not such a exciting thought for most, but if you’re a Borussia Dortmund supporter and you are playing Nuremberg, that repetition is a good thing. For the fourth time in a row now, we have managed to beat the franconians by 2:0 - our very own “Groundhog Day” indeed.

As for the game itself, Kevin Grosskreutz probably said it best: “We won the game. We don’t always have to play perfect football, one has to accept that.” It was by no means a pretty game but that made it all the more important. On a day with difficult weather (a chilling -11°C/12F), an opponent that was both defensive and determined to fight and a early injury of Sven Bender, this victory was earned through hard work and persistence. 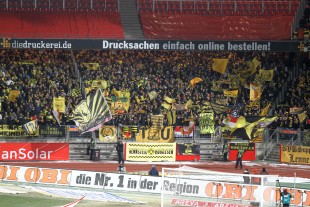 One of the best, if not the best on the pitch today was veteran Sebastian Kehl. His shot to score the all-important 1:0 finally opened the game and gave Dortmund much needed confidence. Almost more than that, Kehl’s defensive work in the first half was crucial to hold of the strong Nuremberg attacks. After Sven Bender’s injury, Kehl ran the defensive midfield by himself and he did so very well.

The opening minutes saw our Borussia open the game as one has come to expect - aggressive and with much speed. Only the last pass and thus opportunities to score were nowhere to be seen. Our franconian hosts took about 10 minutes to warm-up but once there started a onslaught of attacks and corners in particular. In hindsight a good exercise for our defenders Mats Hummels and Neven Subotic that lasted for about 10 to 15 minutes.

The 22nd minute brought a shock to the BVB squad and supporters alike. Sven Bender sprained his foot and had to leave the game. Moritz Leiter came in to substitute Bender and as if the incident sent a shockwave through the players, Dortmund started to re-gain it’s offensive qualities. Lewandowski however could not beat Nurembergs goalie Schäfer (minutes 22 and 34) and Kevin Grosskreutz missed the goal from within the penalty box (26th minute). 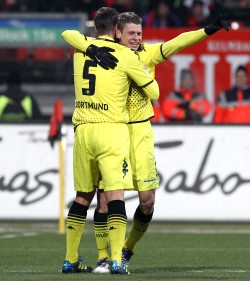 The start of the second half continued the upward trend of our young guns. A beautiful low cross by Moritz Leitner was horribly underestimated by Nuremberg’s Hlousek and ended up with Piszczek on the right-hand corner of the penalty box. From there, the polish national had the overview to see Sebastian Kehl coming who was able to score for the 1:0 in minute 47.

The importance of this goal can hardly be underestimated as it changed the dynamic of the game dramatically. Nuremberg now had to open up and give up it’s main strategy of building a solid defensive line. This gave opportunities to our Borussia, who was able to take control of the game from here on in. While Nuremberg struggled to get it’s offensive going, our guys were able to conserve energy and slow down the game. While that did not make for an exciting minutes to come, it was critical considering the English week coming up.

The 82nd minute brought some excitement again when Lucas Barrios was able to take advantage of a shot by Kagawa that was only blocked by Nuremberg’s Schäfer. Lucas did what he does best - being in the right place at the right time to score. While it must feel good for the Paraguay national to finally score again, it remains to be seen if it is enough to re-build the clearly damaged relationship between the striker and our Borussia. 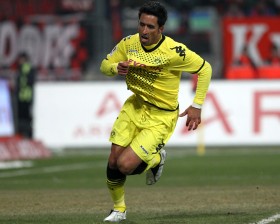 “Sebastian scored a incredible goal to give us the 1:0 lead. The 2:0 was one of those stories that only football can write. The game today was very hard for us. It was to be expected as my colleague Hecking is a very smart and clever coach. Nuremberg has a quality squad and plays well from corners and free kicks. They certainly took some risks early on but that gave them much confidence. Our game was too anxious in the first half. The second half was much better as we re-gained control and Leitner’s fantastic pass to open up Piszcezek was like the can opener that cracked the Nuremberg defense. As for Lucas Barrios - He had some very concrete offers but clearly decided to stay. We really need him and the celebration of the whole team after his goal was just fantastic. My face almost exploded out of joy!”

Not so fantastic four

It is hard to look at the game in Nuremberg and not think that this was a huge step towards a possible defense of the Bundesliga championship. While our Borussia struggled at times to gain control of the game, we walked away with a less than stellar performance but a solid 3 points. All the other members of the “fantastic four” (A new media favourite to group Dortmund, Bayern, Sch**ke and Gladbach) disappointed by only winning one point each in clearly winnable match-ups. 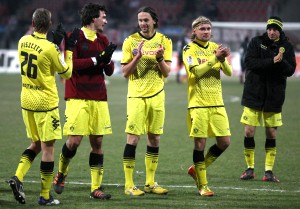 There are 14 more games to be played, 42 points to be earned and many mistakes to be made. It is clearly too early to call anything but to agree that even after 20 weeks, our beloved black-and-yellow have already proven once again that they are a tremendous team that deserves our unconditional love, no matter what the next 14 weeks may bring. Tuesday will bring the next national cup (DFB Pokal) match against amateur club Holstein Kiel (8:30 CET, 2:30 EST) and could send us on the road to Berlin while Saturday will be a home game against chemical-giant-puppet Bayer Leverkusen (3:30 CET, 9:30 am EST). Sven Bender is already confirmed to be out for the Kiel game with a detailed diagnosis to follow on Monday. 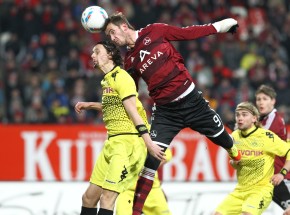