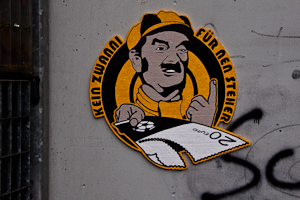 While I was writing my "looking back onto the year 2011" text, I remembered all the great moments we had during that year.
And I realised that the year 2012 would have a damn hard time to be close to as great as the year 2011 had been. But it looks like the year 2012 is not satisfied to only be maybe one of the greatest years in our history, no, it is trying hard to bring us just as much joy as 2011 did- with an amazing victory against Hamburg IN Hamburg.

We had hoped that we would be able to leave our bad luck concerning injuries in the year 2011, but it did not quite work that way. Even though Weidenfeller tried very hard to get well again for the weekend, it was clear on Sunday that our substitute goalie (who was in doubt for a while as well) would be playing for Weidenfeller. Youngster GÖtze was still struggling with his injury as well and so Kuba took over his position on the right.Former "I want to play for a big team" player Petric was struggling with an injury and for the start he wasn't in the first squad as well. 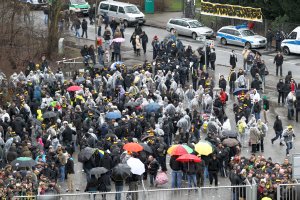 Due to the fact that amongst many others, our Borussia supporters were contributing to the boycott against high ticket prices under the name "kein Zwanni", a lot of our fans decided to not go to the stadium and listen to the radio in front of the stadium instead. We will inform you about these events in another article, let's take a look at the wonderful game instead.

It took out team around four minutes in order to create around three chances to score. Bender (2.), Lewandowski (3.) and Subotic (4.) managed to either shoot or head the ball above the goal. Bad luck for us, but a slight hint about how the game might continue for us. Hamburg tried to work against our fast pacing team but lost too many balls while setting up the game. In return our players seemed to have never lost their 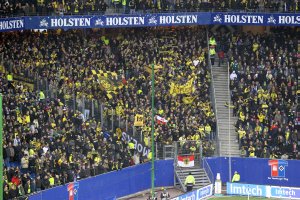 joy for the game. While the last game of the year 2011 was a hard fought for in Düsseldorf, this game in Hamburg seemed like our team had just woken up from a 10 year long sleep, eager and ambitious to run and run and fight and play. It was great to watch. In the 12. minute of the game it was again our Lewandowski who had the chance to score, but the by storming Westermann saved his team last minute from an early goal. However, it was only a delay of facts since our Dortmunder Jung Großkreutz completed what Lewandowski had missed a few minutes before.

After a nice pass from Kagawa, he shot the ball into Hamburgs goal from around a ten meters distance. 1:0 for us. Things were going well. But only a minute later it was Hamburgs Guerrero who had the chance to draw the game. A great header from only 5 meters distance missed our goal by inches. Hamburgs man for the important goals did not succeed this time. After this chance, Hamburg seemed to have woken up a bit, but not enough in order to really put us in our place. It was rather a little try to not go down without a struggle. It appeared as if Hamburgs keeper Drobny had exactly this agenda since he saved Subotics header after one of Kubas freekicks in a great way and kept the hope alive for Hamburg to turn this thing around.Also referee Stark had decided that the game would get boring enough sooner or later and deprived Dortmund of its 2:0 by Lewandowski in the 31. minute. It didn`t help. IN the 37. minute of the game, Hamburgs defense decided to go on holiday for a bit and let Lewandowski march through four or five players without being attacked at all. His lob over Drobny found its way into the goal immediately. 2:0 for us. This was only getting better. Unfortunately someone always has to spoil the fun and so referee Stark called for a break. Too bad. 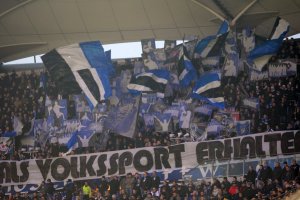 With the second half started Hamburgs support for the boycott and so the Ultras community in Hamburg decided to be quiet for 09 minutes in order to show the players what it would be like to play in front of noone because noone is able to afford the tickets anymore. A nice move by Hamburgs fans, unfortunately for them, their players had none of those nice moves in order to give their fans a little bit of hope that this game might not go the same way it had gone in the first half. Their coach Fink would later say that he had seen enough things in football and would always believe in turning a game around, even after a 2 or 3:0 defeat in the break. It seemed like his players didn't believe in it anymore. Former BVB player Petric, who had left our BVB in order to play for a big team, came into the game but it didn't help. It took us 13 minutes in order to score our next goal. Großkreutz ran down the pitch on the left side like a madman, then passed the ball onto Kagawa who forwarded it to Lewandowski. Lewandowski struggled a bit but managed to keep the ball in the duel against Aogo and passed it on to Kuba, who, cold as ice, hammered it into the left corner from the right side of the penalty area. What a shot, 3:0 for us. Only 6 more goals necessary in order to take over Bayern. The way Hamburg was now playing, it didn't even seem impossible. Five minutes later Lewandowski had the chance to increase the score but missed the goal by only a few inches. Not too bad at this stage of the game. Jürgen Klopp on the other side would later critisize Lewandowski in a joking manner for not scoring the easy goals that he is supposed to score but rather make the difficult ones. Complaining on a high level. 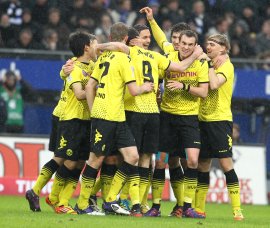 In the 75. minute of the game we got our first penalty shot of the season and ever since our penalty shootout in Düsseldorf, everyone in the Bundesliga should fear us when it comes to penalties. (irony intended) Kuba, however, who got yielded by Hummels, took the ball, and just like with his shot before, he left keeper Drobny no chance at all and scored the 4:0. Only five more to go. The 83. minute of the game came and with it my personal favourite goal of the day, where all three goal scorers were involved, came. Kuba got the ball on the left side and Hamburgs defensive behaviour was again, poor. Kuba passed the ball into the middle where Großkreutz and Lewanwowski were waiting. Within way too many hamburgplayers those two still managed to play a one-two which Lewandowski completed by dancing throug the defense and scoring his second goal of the game. 5:0 for us. What an amazing game from our side. It is true that Hamburg found basically no answers at all, but still the way our teams seemed to dance its way through the pitch, was simply incredible.

Nevertheless, Hamburgs players found that our Mitch Langerak had not enough to do that day and Guerrero finally scored his goal after our defense was taking a nap for a second. Shit happens, and still, it was nothing that could ruin our great mood this day. 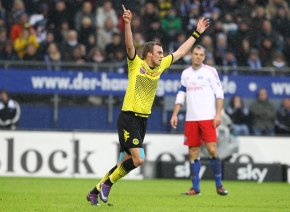 If this was a a reflection on how the year might continue, I guess we can be absolutely happy. But even if it wasn't, it simply doesn't matter. There will be better days and there will be worse days. But what is important is the fact that we can always trust our team. It doesn't matter whether Götze or somebody else is out for a couple of games, we don't have to live through a panic attack. We have so many players who really enjoy to be part of this team and who will always give their best for our Ballspielverein. It is amazing to watch this team grow together where everyone is fighting for the other. And even though Hummels was supposed to shoot that penalty, he simply let Kuba shoot it since it was important for him. And I am pretty sure that this definetely is a reflection of how our team works, plays and simply is: great!
Thank you Borussia for showing us what we have missed during the past six weeks, we can hardly wait for the rest of the season to come.And of course, always there to support you, inside the stadium, outside the stadium, but in thoughts and in loyalty, always there with you.