A perfect week ends with carnival in Mainz 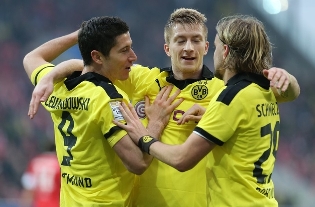 One couldn't be too optimistic about the game against Mainz 05: Although we've won the last four games against the ex-team of Jürgen Klopp, Mainz is never an easy opponent, recovery time after the win against Amsterdam was very short and until Saturday there was no hope for our two defensive midfield players to participate. Exactly in the second you might have started to wonder, "Damn, what to do without Bender and Kehl?", there's the starting line-up and with a sigh of relief you notice that "Chuck Norris" Bender will play though he broke his nose on Wednesday. And then he enters the pitch and he's not even wearing a protection mask! The following game against Mainz 05 must have been exactly of Bender's taste: intensive, fast and powerful.

The coach of Mainz 05, Thomas Tuchel, put a lot of effort into finding the right means against our Borussia and already changed four positions in the starting line-up: Zabavnik, Baumgartlinger, Soto and Müller substituted Junior Diaz, Kirchhoff, Polanski and Risse. As bender was able to play, the starting line-up for black and yellow was only changed on Großkreutz's position who was substituted by Kuba.
There was 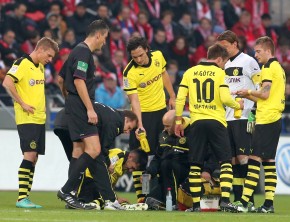 not much time in the beginning of the game to tell each other jokes about Chuck Norris vs. Sven Bender because Mainz 05 scored after only four minutes which was quite a shock (even Caligiuri, who scored from 16 meters distance, looked as if he couldn't believe what had just happened). Fortunately, our boys on the pitch didn't seem to be shocked at all. They put a lot of pressure onto the very well playing team of Mainz and, what a relief, equalized in minute 12. Until now, it's not sure whether it was Marco Reus who shot from the left corner of the box or if Robert Lewandowski hit the ball in front of the goal with his right calf. Whoever scored this important goal - we don't care. It was a nice shot by Marco Reus, who after the game said in an interview that he "couldn't care less" about who scored the goal.
The game's intensity could be felt and seen in every tackling. As said before, Mainz 05 was well prepared and highly motivated, but in the end (and I just love to say that now) we had the better players. In other words, thank God that we've got the coolest team in the world, with the craziest and loveliest coach, the best stadium and, most important, the best fans. That's why there are players like Marco Reus, Mario Götze, Robert Lewandowski and of course not to forget all the others playing for us. Sorry, Mainz.

After all this pathos, we have to get back to the bad news: Mid-halftime, Noveski steppe 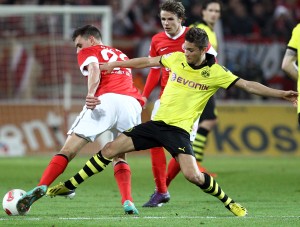 d onto Gündogan's ankle in an obviously very, very painful manner and Ilkay had to leave the pitch. This was a bit of stress for Moritz Leitner who wasn't really warmed up at that point during the match so the Borussia had to play short. This was an advantage for Mainz 05 - they almost scored another time during minutes 33 and 34 when Leitner was still missing, but Ivanschitz missed the goal. After that, Leitner did a good job replacing Gündogan.
To make an enjoyable game even better, the boys in black and yellow scored the 2:1 in minute 43. And what a beautiful goal it was! Götze passed to Lewandowski who was alone in front of Mainz' goalie Wetklo and bore him down.

The second half again started with substitutions by Mainz 05 - scorer Caligiuri was replaced by Risse. Although the game wasn't as intensive as during the first 45 minutes, Mainz still did a good job and our Borussia tried to calm down a bit which was only reasonable after the last exhaustive weeks. The biggest chances had Lewandowski in minute 51 and Risse for Mainz 05 in minute 54. Kuba was replaced by Großkreutz (73.) and Götze by Perisic (83.). As during last week's Bundesliga game, our boys controlled the ball and the game. Noticeably, Mainz didn't have the energy to pursue the speed of the first halftime. This resulted in a lot of fouls and (not enough) yellow cards. It wasn't easy, but we've won the match and are now second in the league - and first in our Champions League group. There's not much more to wish for. Well done, boys!