The Weekend after Madrid 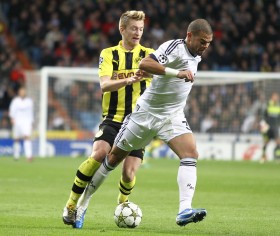 It’s back to Bundesliga business for Borussia on Saturday as they face bottom of the league Augsburg. BVB, hailed by many as “the best team in the world right now, maybe (if it wasn’t for a bunch of other teams), need to continue picking up points in Bundesliga to not lose any more ground on the Champions League spots.

Only four days after a career highlight for Borussia’s young team the black and yellow at the Bernabeu the Klopp team needs to prove they can get back to Bundesliga action and fully concentrate on important weeks ahead. Currently trailing Frankfurt and that team from Gelsenkirchen by four, and Leverkusen by two points Dortmund are everywhere but where they want to be.

“16 points,” said Aki Watzke on ZDF Sporstudio last weekend “are not a disaster, but they are also not a dream come true.” Mid weeks Champions League clash at the Bernabeu was a dream (up until the 89th minute that is) but to repeat those dreams Hummels & Co will certainly have to fully concentrate on Augsburg. 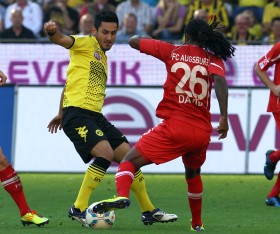 Currently sat on the bottom of the league, Augsburg for sure look like an opponent to beat. The Weinzierl XI have only scored in three of their 10 league matches, and not found the back of the net in 289 minutes. On match day seven they beat Werder Bremen 3-1 at home, this until this day remains the only win during this year’s Bundesliga campaign. However, Augsburg striker Sascha Mölders, 23, is set to return to the team and is hopeful he can end Augsburg’s drought period, but refused to put extra weight on his shoulders: “Not only the strikers are responsible for goals,” the former Rot-Weiss Essen man said. “The whole team must help. And we will be successful again.” Mölders had been ruled out with an ankle injury ever since June, but recently returned to Augsburg reserves, scoring four goals in only three performances for the fourth tier team.

But even if Augsburg does not score Borussia still could be up for a disappointing Saturday. Last season’s lucky escape in Augsburg should be enough to serve as a reminder. The Bavarians kept the only clean sheet against Dortmund, and were only one of two teams (the other being last week’s opponent Stuttgart) to hold Borussia to a draw during their most impressive run of all time, picking up 47 of a possible 51 points in the second half of the season. 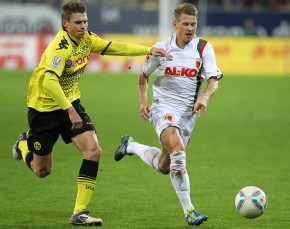 “We know we have to atone for something there,” said Klopp during Thursday’s press conference. “There are still a few points waiting to be picked up there. We’d like to do that.” Klopp added that the team knew what was awaiting them and they’d travel to Augsburg “with all respect”. “We want to get back on track – and want to get results” Which could be possible ahead of the Bayern match in early December with Fürth, Mainz and Düsseldorf lined up as the next opponents.

Klopp could make a few changes to the team that shook the world in Madrid. Skipper Sebastian “Zorro” Kehl should be rested and with Sven Bender returning from yet another injury the deep midfield pair could be Ilkay Gündogan and Sven Bender. Kuba, who has returned to team training, however will not be an option in Augsburg. The Poland skipper had some extra units in the Footbonaut and felt tired afterwards. It was about returning Kuba not too late but also not too early, Klopp said. “It looks like he will not be in the squad this weekend,” he added.

Fellow Poland internationals Lukasz Piszczek and Robert Lewandowksi will be in the squad and most likely start in Augsburg. Piszczek picked up a minor injury against Real and Lewandowski send his agent ahead, who told Spiegel Online this week that Robert had no competition in the squad and he’d need that to get better. It might be the last chance for Lewandowski to score in Augsburg, he better use it to make a name for himself in Stoke, Reading and Swansea. Teams he’d love to face on the big stage that is the Premier League. But up until the early days of June 2013 the hitman will remain a black and yellow. Augsburg is calling! And without Augsburg there will be no Madrid next season. Three points are needed. Always and especially on November 10th.