Goalless draw against Stuttgart - so what? 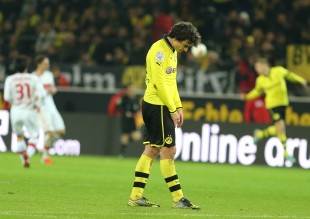 Last year, it seemed like Borussia can only play national competition. This year, it would be exaggerated to say that Borussia is only able to play international competition regarding the recent results in the Champions League. However, the German double winner still has some problems getting into the new season. Even though the opponent on Saturday was the expected hard one with VfB Stuttgart, Borussia missed good opportunities to score the decisive winner and has to be content with a goalless draw just a few days before the big Champions League match at Real Madrid. Both the fans and the officials of the club dreamt about a better start into the season, but let's face the fact: Nothing can be considered decided anyway. Borussia is ranked on number five in the table, four points behind the second place which happens to be taken by the blue-whites. Of course, Bayern Munich is already eleven points away, but first, Borussia was behind nine points last year as well and second (and more important) – who says that we have to win the league again? Qualifying for European competition (Champions League) should be the main goal – as it was called before the start of the season by the officials. Therefore, a goalless draw against a good-shaped opponent coming to Dortmund with recently impressive results is not too bad, isn't it? 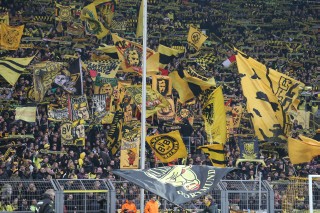 Borussia started with the same squad which beat Freiburg just one week earlier and missed Kuba, Bender and Owomoyela with injuries. The double six was formed by Kehl and Gündogan which meant a change in the starting line-up compared to the cup match in Aalen where Moritz Leitner replaced our skipper. Stuttgart had to make it without Cacau, Torun, Didavi and Audel. While Dortmund presented the usual 4-2-3-1 system, Stuttgart's coach Bruno Labbadia decided for the offensive 4-3-3. It was obvious that both teams went into the Westfalenstadion to gain something and many people were of course reminded at the tremendous 4-4 of last season. On Saturday, however, it was different...

No need to say that the Westfalenstadion was sold-out once again. The atmosphere was brilliant and even though some fans caught their flight to Madrid just a few days after the final whistle, nobody wanted to miss the Bundesliga competition. Under loud "Deutscher Meister steh' auf" ("German champion stand up") chants, Ilkay Gündogan presented the first opportunity of the match-up after around five minutes. Stuttgart's Keeper Ulreich who impressed with regular good appearances over the last months, was there to make the save. Mario Götze's second attempt clearly missed the goal by a few meters. 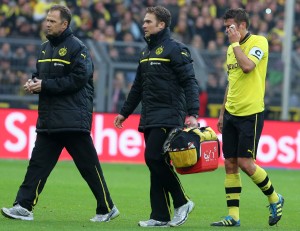 Five minutes later, the first Westfalenstadion roar can be heard all over Dortmund when a free kick by Marcel Schmelzer found his way into the goal. However, Mats Hummels stood off-side and confused the defense and goalkeeper of the guests so that referee Zwayer had no other chance than to call it off (9th). With the "goal" giving momentum to the black and yellows, Hummels assisted Schmelzer with a long shot from the defense but the number 29 slightly missed the goal by a few inches (10th). During the start of the match-up, Borussia was the better team in control of the game and had the first good chances, when Stuttgart decided to fight their way back into the match. So did Holzhauser who used all the power of his left arm in a tackling in the air against Sebastian Kehl who suffered a broken nose by this attack and needed to be replaced by Moritz Leitner (20th). Referee Zwayer had the best view of all the 80.000 people in the Westfalenstadion and to the misunderstanding of the black and yellow part of the attendance, only booked Holzhauser instead of sending him off the pitch. Situations like that one had been penalized with a red card more than one time over the last months. The 19-year old was very lucky to continue playing. The next one being very lucky was the defense of the VfB when the biggest chance of Borussia during the first half could be seen on the pitch. A corner kick from the left side found Hummels whose shot only hit the cross bar. But the ball fell back in front of Hummels who tried to score the leader with a header, only to be beaten by defender Boka who cleared the ball just inches in front of the goal line (29th). 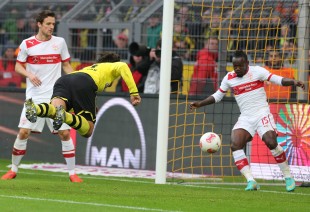 It was unbelievable that Borussia was not in the lead at that time of the match! Just seconds before half time, Stuttgart, however, had also a good chance to score when Weidenfeller blocked a shot by Traoré and the ball directly found the food of Ibisevic who could not react that quickly so that the ball fortunately missed the goal. Half time, no goals, but not a bad game from both sides although Borussia got the better part of it even though they were unlucky not to go into half time with the lead.

The second half started with a attacking squad of Borussia and the brilliant duo of Götzeus. Götze assisted Marco Reus who missed the goal from a sharp angle (50th). Julian Schieber, who scored two goals in Dortmund for Stuttgart during the 4-4 of last season was brought into the match during the next couple of minutes and had to score just a few minutes later when a great pass by Götze saw Schieber being through the defense, but Ulreich stormed out of his goal and made the safe (60th). Like I stated earlier, 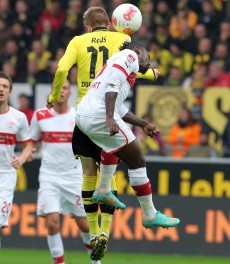 it was unbelievable that Borussia was not in lead of the match. Götze tried his best during the first period of the second half and finished one attack on his own after 66 minutes when a shot from around 24 meters slightly went beside the goal. However, Stuttgart was not out of this match since Ibisevic nearly capitalized from a mistake by Hummels and appeared in front of Weidenfeller who reacted quite well and made the save for the German champion (73rd). The last chance of the match then again belonged to Borussia when Lewandowski's shot which reminded a bit at the late winner against Ajax Amsterdam only hit the cross bar once again (88th).

All in all, Borussia had the better chances and could have left the pitch the deserved winner but missed good chances and therefore only gains one point. So what? Like I said at the beginning of this text, it was still a match against a strong opponent and many matches are still to come. 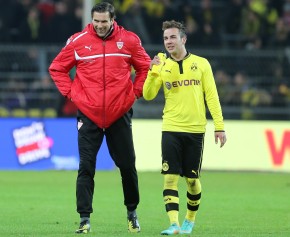 At some times, you have to take one point as well even though everyone would have been happy with a 1-0 as well. But it is already time to look forward and focus on the match in Madrid on Tuesday and afterwards, three points for German competition could be won in Augsburg. At the moment, there is no time to think about what could have happened. Just go on Borussia. A goalless draw in Madrid, for example would be a very good result.