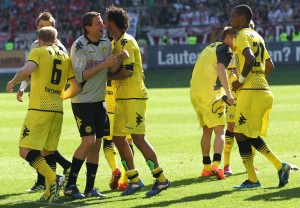 Borussia Dortmund is the new and old champion of German Bundesliga. That is no news, but since we already won the championship, a match one week later, especially against a club who already is relegated, gets a special touch. Of course, there were still three points at stake and the team is willing to become the best German champion of all time by making it to 81 points at the end of the season. And even though some fans decided to give their tickets away for free in front of the stadium in Kaiserslautern (since those event fans were willing to see Dortmund claiming the title in this match), 10.000 Borussians could be counted on the Betzeberg. And with seven goals in 90 minutes, they surely got some entertainment for their money.

Jürgen Klopp made seven changes to the line-up against Mönchengladbach and brought Mitch Langerak for Roman Weidenfeller. Klopp later stated that it was clear that Mitch would get another match during this season and Weidenfeller could decide whether it was in Kaiserslautern or against Freiburg next week. 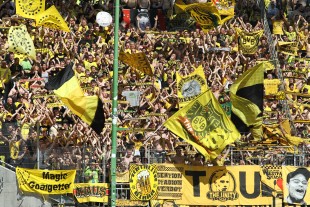 The only regular of the defensive line was Neven Subotic who was joined by Felipe Santana, Chris Löwe (replacing injured Marcel Schmelzer) and Patrick Owomoyela. The double-six was formed by Gündogan and Kehl and Mario Götze found himself in the starting eleven for the first time in 2012. Perisic started as well as Lewandowski who took the spot in the offensive midfield, leaving place on the forward position for Lucas Barrios.

Like I stated earlier, the Borussians stormed the Betzenberg in Kaiserslautern in big numbers to celebrate the championship for one more (but not the last time). Like last year in Bremen, the atmosphere was pretty good and even the fans of relegated Kaiserslautern applauded to the German champion when the players got on the pitch. At one point in the match, all fans kind of celebrated together and one special moment created goosebumps. During the last minute of the match, the fans of Kaiserslautern started singing "You'll never walk alone" claiming that they will be behind their team in the second league next season. The Borussians joined them so that the whole stadium was singing this important football song which was quite impressive. Another big moment was the substitution of Florian Kringe. 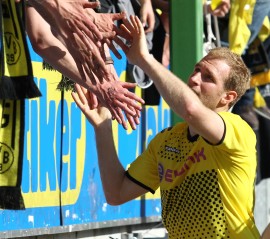 The whole guest area demanded this sub and finally got in in minute 77 when Kringe replaced Götze and nearly scored afterwards. Kringe is one of the most loyal players of Borussia, who was going through all the hard times with the BVB and will leave Dortmund this summer. Thank you, Florian, for all your time, love and passion! As you can see, very emotional moments dominated the match in Kaiserslautern and that is why I focused rather on the atmosphere than on the match itself. However, I will still give an overview about the seven goals which happened.

Minute 16: Unfortunate Santana. After he made a mistake in the midfied, he stormed back to the goal, following Kaiserslautern's Fortounis who found his way through the defense of Borussia and decided to pass the ball over to another forward but Santana got into the way, ran into the ball and the leather made its way to the goal and brought the lead with an own goal. 1-0 Kaiserslautern.

Minute 18: Quick answer by Borussia. A cross from the right by Patrick Owomoyela found the head of Lucas Barrios who headed the ball into the goal. Second goal of the season, the early lead was equalized. 1-1. Nice to point out that two players who recently did not get much time on the pitch were responsible for this goal.

Minute 26: Another nice attack saw Lewandowski assisting Perisic who gave the ball from the right into the middle, Barrios was there once again and brought the lead for Borussia. 2-1, third goal for Barrios who will most likely leave Borussia in summer.

Minute 33: The last time Götze scored for Borussia was in November 2011. After another brilliant combination, Götze was sent through by Lewandowski and left no chance for Kaiserslautern's keeper. 3-1, the comeback for Götze was a perfect one.

Minute 49: Kaiserslautern shortened the lead after the cross from the right by Fortounis and de Wit got his head on the ball even though Mitch Langerak stormed out of the goal. Could be called a mistake by our Aussie goalie, but who cares in the end anyway? 3-2.

Minute 55: Inspired by the mistake of Langerak, Kaiserslautern's goalkeeper Sippel lost the ball 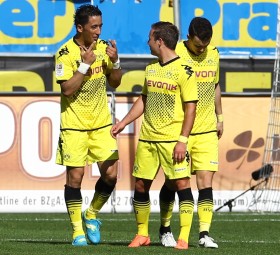 in the penalty area to Ivan Perisic who assisted Barrios in the same move. Nobody could really know what was going on in the head of Sippel, but Barrios thought "Never mind" and brought back the 2-goal-lead for Borussia. 4-2.

Minute 76: The final point of the match was marked by Ivan Perisic with a nice shot from the left. 5-2 Borussia and the end to a really nice kind of friendly match.

In the end, it was not really about the match on game day 33, it was more about celebrating and watching football while the sun was shining bright. A nice afternoon in Kaiserslautern with Florian Kringe, three goals for Barrios and another victory for Borussia. With a victory over Freiburg, Borussia will become the best German champion in history and I am pretty sure we will get that record before we finally get the Schale back on Saturday.