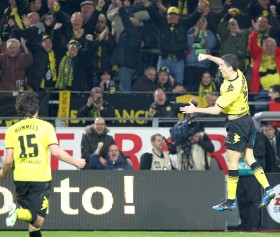 Yesterday evening, Dortmund once again showed and proved to all their supporters and football lovers why the heart of German football beats, has always beaten and will always beat in our beloved city, when the current championship leader Borussia Dortmund defeated its closest opponent Bayern Munich with 1-0 in the first peak of the upcoming Bundesliga season finish 2011/2012. Superlatives were not enough to describe the excitement of the media, supporters or club officials before this top clash. However, at the end of the match we can talk about soldiers of fortune, unlucky individuals and the five +2 most intensive minutes of the year.

The preconditions of both clubs could not have been better. If Bayern Munich would have scored the three points, they would have had the chance to overtake Borussia Dortmund in the table to regain the table lead that they lost at match day 14 when Borussia won the Derby 2-0 and Bayern lost simultaneously with 3-2 against Juergen Klopps old squad FSV Mainz. Dortmund in return would have been able to extend their table lead up to six points that would grant us a sound advantage for the last five season games with Sch***e 04 and Borussia Moenchengladbach as two of our next opponents. Further, Dortmund managed to win the last three games against Munich and was of course willing to extend this wonderful series. Concerning the personnel-situation, Juergen Klopp decided against all expectations not to nominate the healed Mario Goetze for the yesterday?s squad who still has a bit of training deficit after his long injury lay-off.

For Ivan Perisic who did an excellent job versus Wolfsburg in the last match, Kevin Grosskreutz came back in the starting line-up to face Munich midfielder Arjen Robben on the left wing together with his teammate Marcel Schmelzer. On the opposite side the 'Polish connection' Pisczeck and Kuba should make life difficult for Franck Ribery. Guendogan, who is undeniably in a good shape these days started next to Sebastian Kehl in the defensive midfield. Munichs coach Jupp Heynckes further decided to draft Luiz Gustavo in; the convalesced and desperately missing Sebastian Schweinsteiger had to take a seat on the substitute bench for him.

In a breathtaking atmosphere the players entered the Westfalenstadion, knowing about the extreme importance of this match. The excitement in the air was sensible for everyone, leading to the fact that the Dortmunder audience made the Westfalenstadium to one united standing terrace, a condition that would persist the majority of the match time. 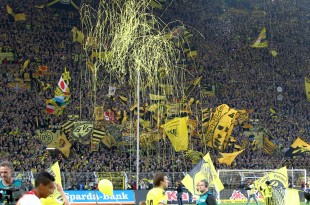 However, only one minute was required for our beloved club to underline their ambitions for this match: a nice pass from Guendogan out of the midfield through a gap in the moved up Munich defence line into the left half of the box to Kuba initiated the first chance for Dortmund. Unfortunately, Munichs goalie Neuer reacted quickly, leaving his goal and shortening the angle for Kuba, who could only use a lob that missed the goal clearly. Dortmund started excellent in this game, applying their well-known pressure and creating further chances. In the fifth minute, the goal roar was already shortly in the air: Kuba and Kagawa passed their way through Munichs left wing defence, Kuba then with a cross that was first defended by Gustavo, Neven Subotic kicked the second ball in the box, Kehl forwarded it via header to Kagawa who directly crossed the ball in the six-yard box to Grosskreutz who wanted to volley the ball into the net, forcing Neuer to a brilliant save with his left foot, the follow-up shoot from Lewandowski could also be parried by him. Wow, what a start of our Borussia!

Dortmund managed to further control the game, showing a more encouraged than their opponents who failed to play their game and to entirely accept the fight. However, the majority of the match took place in the midfield without the creation goal scoring chances on both sides. In minute 24 Kagawa brought himself with a solo run on the left wing in a brilliant position to score after crossing the box parallel to the baseline along Munich defence line but the shot was too weak to threaten Manuel Neuer. 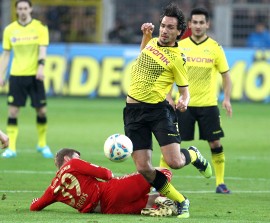 In return, a few minutes later a solo action of Kroos brought the first noticeable chance for Bayern Munich after Kroos got in a good shooting position from 20 yards, missing the right post of Roman Weidenfeller closely. In return another chance for our Borussia: Lewandowski with a wonderful long cross form the right wing to Kevin Grosskreutz who directly passed the ball to the moved up Mats Hummels in the six-yard box? but the offside whistle sounded. A corner kick in minute 37. was the next exciter for all Dortmund supporters: Guendogan with a flat pass to the 18-yard line that was defended by Lahm, the attempted clearance reached Kuba who made a brilliant cross into the box, Lewandowski jumped highest at the back post and hit an excellent header that defeated Neuer but the inside of the left post saved Munich the deficit: Halftime, time to take breath.Dortmund started better in this game, creating several great opportunities to take the lead. However, Munich somehow managed to keep the draw without being compulsively dangerous in front of Borussias goal. If Dortmund could manage to continue the second half as they ended the first, three points would be realistic and deserved.

Dortmund started the second half as they ended the first. In minute 50., Lewandowski passed to Kuba on the right wing who once again made a good cross into the box where Kagawa dabbled himself with a header towards Manuel Neuer, but this one was too weak to defeat the 6.45 ft. goalie. Opposed to expectations, Dortmund now missed to keep up the pressure and their game and Munich started to attend to the matter by building up pressure and challenging our defense line. As a consequence, several unusual misplaced passes in our build up let Munich control the game, leading to the fact that they temporary had a ball possession of 73 % to 27 %. Naturally, this possession helped them to create several good opportunities to score but as Dortmund did in the first half, also Munich missed the entire determination to force a goal.However, a lead for Munich would have been justifiable after the first third of the second half. In minute 72., Kagawa dribbled his way into the left side box, releasing a flat hard shot that missed the right bottom corner of Neuer?s goal closely. As a consequence of Munichs possession, Juergen Klopp substituted brought Perisic and Leitner for Kagawa and GÅndogan in minute 75., what turned out to be a lucky pull.Just one minute later, Leitner passed the ball on the left wing to Perisic whose try to cross was prevented by Alaba: Corner kick. Leitner kicked a short corner to Schmelzer who crossed the ball into the box. From a Munichs head the ball reached Gro·kreutz at the 18-yard line who hit a volley towards the goal of Manuel Neuer and then it was ROBERT LEWANDOWSKI in the 6-yard box deflecting the ball with his heel, making it impossible for Neuer to save. A quick look to the linesman gave certainty: Goal, 1 - 0 for Dortmund because Arjen Robben at the back post failed to move up after the corner kick and thereby played Lewandowskis onside. Yes, Yes, Yes!!! ... YES! 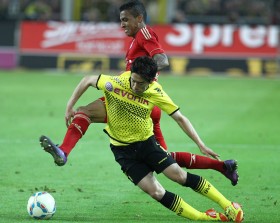 After the lead, Munich stepped up their efforts and sieged Borussias box. In minute 84., a combination via Alaba, Gustavo and Ribery reached Robben near the left side of the six-yard box, Weidenfeller who slighty misjudged the situation jumped in Robbens way; a little contact was enough for amateur-actor Arjen Robben who knew that he wont reach the ball anyways? penalty kick and welcome to the most intense minutes + 2 of the season:

84:50 - Robben placed the ball on the spot although the saying is that the fouled player should not shoot himself? well, that must have a reason, or?!

84:53 - The stadium is standing, the chorus of whistles was audible in the whole country. Simultaneously the audience was thinking how the squad would react to the imminent draw, knowing that Weidenfeller is anything but a 'penalty killer' 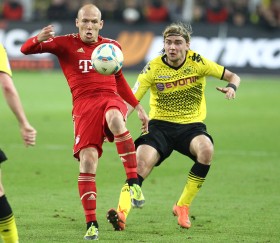 86:54 - Alaba and Olic (substituted for Gomez) dribbling in the box but could not decide who should shoot, a save from Weidenfeller in the last second keept the lead.

90:00 + 00:17 - The ball dropped on the cross-bar directly in front of Robben who FAILED to score into the empty goal out of three yards distance by shooting the ball on the terrace!!!

90:00 + 00:58 - Weidenfeller prepared the goal kick, unfortunately a second ball dropped on the pitch. What must be, must be: Weidenfeller took his time to solve the problem.

90:00 + 01:05 - Schweinsteiger cursed this damn second ball and demanded the referee to show the ball a yellow card.

90:00 + 01:20 - Perisic reached the ball and passed it to Owomoyela who was substituted for Kuba, Owo forwarded it to Lewandowski on the right who made his way into the box, Neuer came out his goal, Lewandowski lobbed the ball promising towards the goaaaaaaaaallllll ... CROSSBAR!! DAMNIT! No decision yet!

90:00 + 02:12 - Throw in for Dortmund, the stadium is still upside down, the whole substitute bench is freaking out next to the sideline. 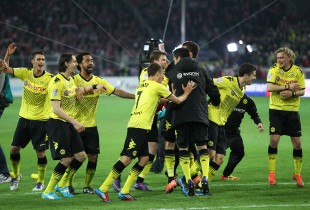 90:00 + 02:30 - Still no final whistle but everybody knows how dangerous and lucky Bayern can be in the final minutes.90:00 + 02:41 - Owomoyela running towards Neuer, Alaba gets in his way and passes back to Neuer. Neuer shoots but there is the FINAL WHISTLE! Game over, 6 points lead, fourth victory against Bayern in a row, Roman as our hero, Robben the jinx today, life can be so beautiful!!!