Thank God there was a whole weekend to recover from what has happened on Friday evening. Finally, I have stopped trembling with excitement, and you definitely need a calm hand to write down every detail of this insane game, so here's what happened: Joy. Happiness. Anger. Disbelief. Hope. Fear. Disappointment. Laugther. 8 goals, 1 point for our boys. How is that even possible? Here are the details. 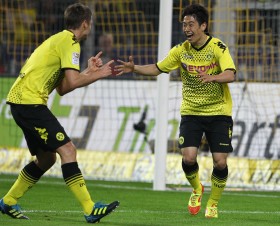 I guess everybody was expecting a rather tough match against Stuttgart. During the first half, our Borussia was the stronger of two high-class teams with an outstanding Ilkay Gündogan who finally has the chance to show and prove his talent. The BVB basically started the game running over the guys from Stuttgart with especially their pretty successful striker Martin Harnik almost disappearing on the green, green ground of the Westfalenstadion. Sadly enough, the boys somehow didn't manage to to score. There were 15 shots on the goal of Stuttgart, starting with Kagawa in minutes two and five, Kuba in minute four, Lewandowski in minute 16 and 21 and Großkreutz in minute 24.Some of these shots left us speechless, some made us scream at least a second too early because everyone, really everyone thought "This is it, the damn first goal!". But then again, it wasn't. After Lewandowski's shot in the 21st minute that didn't get inside the goal because Stuttgart's Niedermeier headed it off the goal line and Großkreutz's shot in the 24th minute that only hit the bar, there was a serious need to bang your head against something. This couldn't be true! 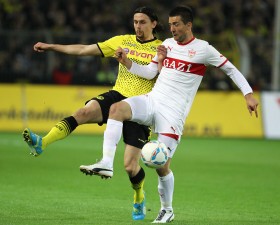 Even though the Borussia was the stronger team, Stuttgart had two not too bad shots onto our goal and we held our breath when Ibisevic ran towards the goal in minute 30 and Weidenfeller stopped him in a way that one or the other referee, at least Wolfgang Stark, would have thought to be reason for a penalty. And then, finally, there it was. 33rd minute, Kehl passed to Shinji who just hammered the ball into the goal. Oh, what a relief! So far, we were on a good way.

So let's talk about the second half. Remember, there were 8 goals during the match - so, 7 to go! Still being the absolute happiness, everyone in the stadium wearing black and yellow chanted his or her way towards another three points in the league. That's at least what we all thought, especially when Kuba scored the second goal for our Borussia in minute 49 after he received a pretty pass from Hummels. Borussia was leading 2:0, what a nice start into the weekend! 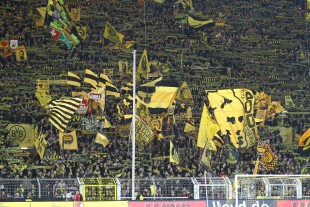 And then, after an intensive match, there came minute 71. And from that moment on, nothing was to be left over of this nice, safe victory we all thought to be witnessing. First, Ibisevic scored. And then, six minutes later, Schieber. Absolute bitterness. And then, just two minutes later, Schieber again! This wasn't just bitter anymore, it was truly unbelievable. Stuttgart needed 8 minutes to turn the game from a comfy 2:0 to a devastating 2:3. But this was by far not the end. Who's still counting? Right, 3 more goals to come. After having spent three minutes in anger quite a bit of amazement (was this really happening right now?), there came Mats Hummels, and don't we all love this expression of absolute determination on his face? Mats is determined to score, and his shot into the left corner of Stuttgart's goal is perfectly placed. The Westfalenstadion explodes, that's it, we're back in, 3:3. Everyone in black and yellow has hope again, and apart from the Südtribüne, we have the Südwest to flip in chanting and supporting. 8 more minutes to play! 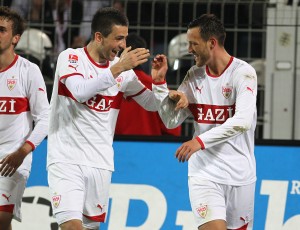 The last corner kick of the regular match time, in minute 87, was acted out by Schmelzer. And the unbelievable happens - Perisic drop-kicks the ball into the goal, out of 8 meters distance. After almost 90 minutes of emotions of all kinds, our beloved BVB is leading again. Crazy. Crazy. Crazy. Perisic freaks out (loses his jersey accidentally), the team freaks out, the Südtribüne, the stadium. Basically everyone. Later, there will be a nice slow-mo of Jürgen Klopp on TV, jumping up in the air (at least three meters high) and screaming. Beautiful!
I'm sorry, but for the record I also have to mention that there were three minutes of extra time which Stuttgart used to score the 4:4. Just in case you were still counting. I'm not going to comment on this any further and I have no clue who scored. Sorry.

"This was a game that I'll tell my children about" (Ulreich, goalie of Stuttgart)
"Now you know why it is so expensive to buy the rights to show football on TV" (Klopp)
"Unbelievable!" (Leitner) 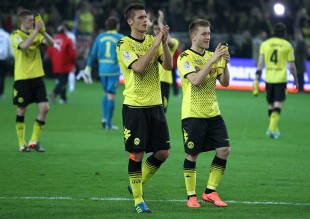