A Substitution Led to the Decision 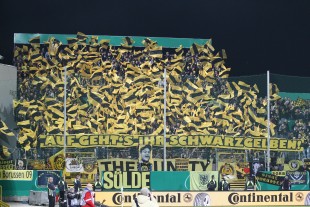 As the opening whistle shrilled in Fuerth, probably no one would have expected that both teams would need 120 minutes until the final decision of the match. In front of 15,500 spectators, Ilkay Guendogan was the man of the match, but more of him later. The premises of this cup tie could not have been better - the reigning champion against the current leader of the 2nd Bundesliga. Mike Bueskens, former player of our ugly neighbors and current coach of Greuther Fuerth, wanted his team to act fearless due to the fact, that the second division team would have nothing to lose.

Reactions after the match:

Juergen Klopp (Coach Borussia Dortmund):
"I love my team for those matches. Reaching the final was totally deserved. I already had accepted penalty shootout. I'm sorry for the goalkeeper. Again it was a really tough match. If we use our scoring opportunities perfectly, we are leading with two to three goals very fast. It's normal, that we cannot score four times against this highly motivated team."

Hans-Joachim Watzke (CEO Borussia Dortmund):
"During this match I lost a lot of nerves, it was a total battle of attrition. It was horrible. This is wicked, you cannot overcome this dramaturgy."

Mike Bueskens (Coach Greuther Fuerth):
"Of course it's bitter. We need to stand up again and pull ourselves together. These rabbit punches belong to football. You need to show character. If you present such a performance against the reigning German champion, you can be proud."

15min. In the first minutes both teams acted muted – it was obvious that Borussia Dortmund as well as Greuther Fuerth were anxious to produce no faults. 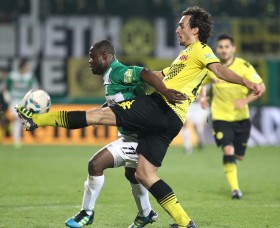 16min. A first chance for Black and Yellow: A free kick of Kuba from the right wing finds the head of skipper Sebastian Kehl – no problem for goalkepper Gruen.

17min. Lewandowski bulldozed his way 20 meters in front of the goal but his shot is blocked by the defense of Fuerth.

27min. A corner from the right wing provides danger in the box of Greuther Fuerth for the first time, unfortunately the shot by central defender Mats Hummels went over the crossbar.

31min. Bare thirty minutes were played when the Young Guns had the goal cry on their tongues. A fine combination was delivered to Sven Bender on the right wing. „Manni's“ cross found the head of Kevin Großkreutz who headed the ball selfless to Shinji Kagawa. But Kagawa was not able to score out of five meters and nodded the ball over. This must have been the lead!

36min. Borussia Dortmund raised the blow count. A cross by Kuba found Robert Lewandowski within the box, sad to say that he was equally surprised as I was.

37min. An first outrage of coach Klopp only one minute later. Heinrich Schmidtgal commited a foul but instead of giving the advantage to Borussia Dortmund, referee Florian Meyer blew his whistle. Would have been a good scoring opportunity!
Halftime. People who expected a gap in class must have been disappointed – I was not. Greuther Fuerth moved his defense really well on the pitch and offered the players of Borussia Dortmund only few space for their combination play. Quite striking was the act of will both teams showed, nevertheless especially Borussia showed uncertainty and a high rate of bad passes.

45min. Restart. Both coaches trusted their starting line-ups and changed nothing. 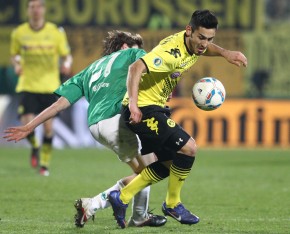 48min. First scoring opportunity for Fuerth! A cross finds Klaus, but his inner Kinski is too surprised.

56min. At least since this minute, more than a few would be reminded by the recent draw against Augsburg in Bundesliga! Lewandowski fooled Mavraj on the right wing, his cross found Kevin Großkreutz but his header is saved by Gruen due to brilliant goalkeeping.

60min. The performance of BVB ceased as the match progressed. Now it was the turn of the Shamrocks. Olivier Occean, a boofy striker, misses the goal of Roman Weidenfeller with a header.

73min. Out of nothing our „Dortmunder Junge“ Kevin Großkreutz with the big scoring opportunity! His teammates delivered him the ball only 16 meters in front of the goal but his shot misses the goal only closely! Borussia stays constant: Our use of the chances stays constantly bad.

82min. Terminator Sven Bender has to leave the pitch – Ilkay Guendogan replaces him. 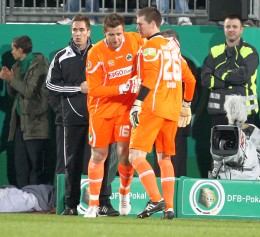 96min. That could have been the lead for Greuther Fuerth! Kazakh Heinrich Schmidtgal with a free kick from the right wing. His shot misses good and evil – meanwhile Roman Weidenfeller takes flight lessons.

97-117min. The overtime was a true exchange of blows. A goal was in the air but both teams lacked of the final will.

118min. Similar to me, Mike Bueskens calculated on penalty shootout. A curious change after 118minutes: Goalkeeper Gruen leaves the pitch for reserve keeper Jasmin Fejzi. According to Bueskens he is a really striking penalty-taker.

120min. SALVATION! 1-0 to Borussia Dortmund! Guendogan! But what a goal has this been? With the last action of the match Guendogan took heart and fired out of 17 meters goalwards. I already wanted to swear when I recognized that the ball hit the post and rebounded to beautiful Jasmin – slapstick is perfect! From the back of the surprised Jasmin the ball finds the net. Probably the first goal in the DFB-Pokal which was scored by a woman! 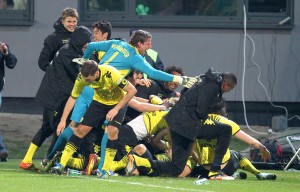 Man of the Match: Ilkay Guendogan. Immedialty after his substitution he tried to seize power and give the performance of Borussia more structure. He rewarded himself for his rising shape he showed during the last weeks.

Bummer of the Match: Mike Bueskens. The ex-Scheisser had to learn that overtime contains of 120 minutes. Substituting the goalkeeper in such an important match leaves behind an quite arrogant smack. The punishment followed promptly.

Greuther Fuerth was on a par with Borussia Dortmund. The shown performance reminded of Borussia Dortmund itself. Nevertheless no one would have complaint if the Young Guns were up after 45 minutes. With progressing match the Franconians grew stronger and had their own scoring opportunities. Black and Yellow believed in its chance until the end of the match and, even tough with a bit of luck, the deserved winner of the semifinal. At this point the man of the match gets his lines of fame:

"The fact that the 1-0 is scored in the really last second, and that I was the person who made it, is a feeling beyond all description. If you make it to the finals, both teams will give everything to win the match. There is no favored opponent. We compete against the team that will reach the finals."

Borussia Moenchengladbach or FC Bayern Muenich, who cares? Berlin, Berlin, we are heading towards Berlin!