Kagawa and his very own birthday present 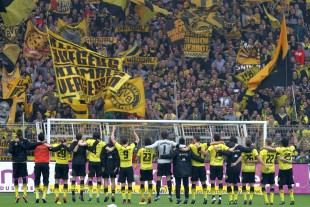 The games between Dortmund and Bremen are usually never boring ones. And quite often we actually meet outside the Bundesliga as well, or so we have a few years back. Twice in a row we played against Bremen in the Cup as well, once we beat them and went straight to the final, next time they beat us and went straight to the final. But Bremen has been suffering throughout the past years. Our strive to the top was simultaneously their downfall. But, one should never underestimate a team, especially not one that basically has got nothing to lose.

As opposed to us who just had to cope with the known injuries from before, Bremen basically had to consider asking a few fans to jump in since half of their team appeared to be injured before the game against us. On that list were among others Wiese, Bargfrede, Marin, Naldo, Arnautovic and Pizarro (who got banned after an assault), while for us only Bender took a seat on the bench after being ill during the week.
Before the kick off there was a minute of silence for our former champion 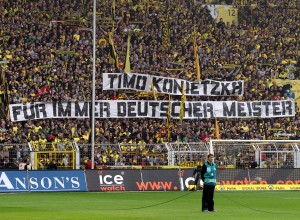 Timo Konietzka who had died on Monday after being ill for a long time. Timo Konietzka was the first person to ever shoot a goal in the Bundesliga, the game back then? Dortmund against Bremen. We had two birthday boys in our row on this day. Kagawa and Santana both had a reason to celebrate.

The first half began and we were on. From the very beginning on our players threw themselves into the duels and played wonderful football where Bremens players could only run behind and watch. After 8 minutes the ball was in their net. After a corner kick by Bremen, Lewandowski got the ball, forwarded it onto Kuba who played it towards our Kevin. He then ran down the line on the right side, took his time to consider and played a great cross to the second goal post where Gündogan was waiting. Gündogan had the eye and passed the ball to Kagawa, who was waiting in the center, ready to head the ball into the goal. 1:0 for us. This was a great start and an even greater goal. Nice work boys. After that, birthday boy number one ran to birthday boy number two in order to celebrate together. I love the union of this team. 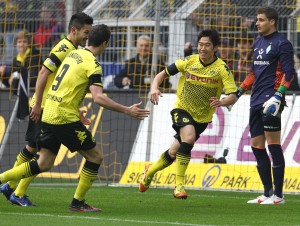 Bremen seemed to be impressed, nothing was working for them. They lost too many ball, were totally insecure and let us play our game as we wished. Unfortunately it was again our day of "how to throw away the greatest chances". We played ourselves into a frenzy but Kuba missed the goal by inches after dancing around Bremens defensive players at the border of the penalty area (12.). After that Lewandowski and Gündogan tried their luck as well but it didn't help. After around 20 minutes the first sign of life from Bremen. Ekici tried to show our players and Weidenfeller that Bremen was attending the game as well by a shot from the distance. But nothing dangerous came out of it. Instead we continued to play our game. But as so often, the cross bar and the goal post are attending the game as well. Kagawa was close to scoring his second birthday goal but only hit the post, after a nice cross by Schmelzer from the left side, Kehl was storming into the penalty area, but only hit the crossbar with his header. Tough luck. Thirtyfive minutes had been played by then and Bremen could definetely consider themselves to be lucky that the score was not 3:0 at that point. Ten minutes later it was time to take a break and let our boys rest for 15 minutes after a great first half of the game.

The second half of the game pretty much started the same way the first half had gone. It was again Kagawa who had the second goal on his foot, but as so often, it didn't work. The game then calmed down a bit. Bremens players must have gotten to hear some words from their coach because suddenly they at least started to react and not simply let us do our thing and watch from afar. 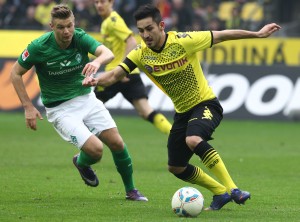 Even though they did not manage to create goalscoring chances, they at least interrupted our game and forced us to play some bad passes. Ten minutes after the second kick off it was again Kagawa who had the chance to score the next goal, but he missed the goal again. You could really tell how eager Kagawa was on this day. After all it was his birthday and it seemed like he was thinking that he was going to do everything so that he could celebrate after the game. After that the game got a lot more quiet. It was mostly played in the center of the pitch where Dortmund was trying to create more chances but Werder was by now eager to, if not score a goal, at least prevent another goal. Gündogan and Piszczek had tried their best from the distance again but since the score stayed 1:0, they tried without success. The last minutes of the game were hard fought for. Our defense was standing like a wall and Bremen found no answers against that, our offense, however, seemed to have lost their answers for Bremens defense as well. After exactly 93 minutes, the referee called it a day and we had managed to extend our record once again. 20 games undefeated in a row. Good job boys. After the game our Südtribüne celebrated with birthday boys Kagawa and Santana. It was a joy to watch.

After the first ten minutes it actually looked like this could be painful for Werder Bremen on this day. Our conversion of chances, however, lead to the fact that we only managed to score one goal on this day. The most important thing though, we didn't get one into our goal and so our players could walk off the pitch with the victory again after the draw in Augsburg. It does not always have to be pomp and circumstance. Bayern defeated Hertha on that night with a 6:0 away, but even for that score you only get three points as well. On that day I said, Bayern could win every game with 10:0 and finish the season with a goal difference of +150, as long as we keep winning our games and concentrate on ourselves, it's all good. I know that a few people are worried now. 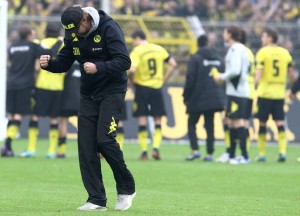 But let's take a look at the facts: 20 games in a row undefeated, the last time we lost a game? six months ago. We are in the lead with 5 points ahaead to Bayern, 19 points away from the fifth place and therefore a Euroleague place in the table, things are looking bright. There are still 8 more games that have to be played. Let's stick together and support our team and everything else will happen the way it is supposed to happen.
But first of all, there is a Cup Game that still needs to be played. Tomorrow in Fürth. Auf geht's Dortmund....!