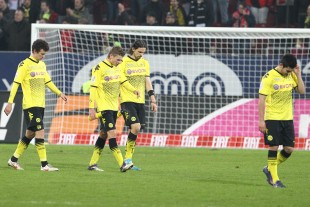 After we have won every game of the second half of the season so far, expectations were - of course - rather high for the game against Augsburg. No one with a bit of understanding for football could actually expect that we would march through every game, claiming victory for victory, and so it should not be too surprising that we struggled against Augsburg. After all, this team should not be underestimated. Especially not when fighting against a possible descent into the second Bundesliga again. It was a difficult game, and the outcome not necessarily satisfactory, but then again, we did not loose and therefore stay undefeated for another game.

After Sebastian Kehl had to miss out the last game against Mainz due to his fifth yellow card, he was now back on the pitch, next to our indestructible Manni Bender while Gündogan had to watch the game from outside first again. 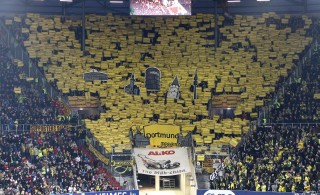 Barrios had a cold during the week and was hence not part of the substitution players.
Our fans showed a nice choreography before the game, holding up the city sign that you get to see the moment you enter Dortmund, alongside with pictures of our city's landmarks.

The game started and from the very first minutes on, our team had difficulties to find their way into the game. Augsburg presented themselves as eager and determined to not leave this stadium without at least one point in their pockets and so Dortmund was running behind most of the time. But not only that, it seemed as if our players were lacking a high amount of concentration on that day since the bad passes gained the upper hand of our game and Dortmund found no answers for the lively team from down South. 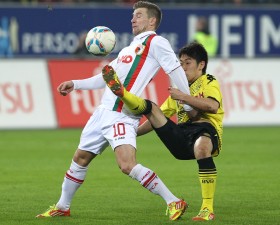 It hence came as no surprise that the first chances of the game were all happening in our half half of the pitch. In the 13. minute of the game it was Augsburgs Oehrl who headed the ball onto our goal, but Weidenfeller managed to save it. Only ten minutes another rather unsettling moment for us Dortmundfans. Chaos in our penalty area resulted in Bender trying to clear the ball. But instead of shooting it behind the goal line, he hit Hummels and the ball almost went into our goal. Lucky for us.
In the 25. minute then a hint of a chance on our side. After we actually got into Augsburgs penalty area for once, the ball came to Kehl who headed it onto Lewandowski. Robert, however, did not get any force behind his header and thus there is nothing exciting to report about this scence.
It sounds rather bad when I say it, but that was pretty much the only chance we had in the first half of the game, well the first one of the two. Augsburg was always there with two players as soon as we got the ball, interrupting our game and taking the ball away from us. Our players seemed to have been caught out of the blue since they found no means against it. In the 40. minute then another chance for Lewandowki. Again a header which he managed to get over Augsburgs keeper Jentzsch but unfortunately Langkamp was there on the goalline, clearing the ball by heading it above the goal. Bad luck for us this time.
Shortly after that it was time for a break and time to find some answers for the second half.

The second half basically started the very same way the first half had gone. Augsburg wa playing the game, Dortmund was running behind. Two minutes after restart, it was Weidenfeller who saved us with a brilliant move. Bellinghause was running towards our goal when Weidenfeller made the right decision of running towards him and clearing his shot with a great reflex. The corner kick afterwards was not of any less danger than the previous attack. This time our keeper did not look too well but Sankoh headed the ball above the goal.
Dortmund seemed to be a bit more determined now, but the outcome of this was pretty much nothing. 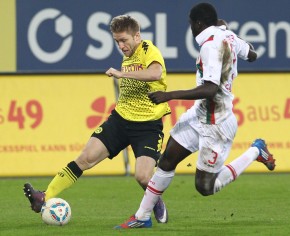 They tried but still the focus did not appear to be in their game which lead to the fact that we lost too many balls to our opponents. During the halftime Michael Zorc had stated that it should be our aim to keep the ball in our hands (or rather at our feet) a bit longer and first it looked like Dortmund was trying to stay calm and actually play that way. Augsburg, however, did not give up and continues to interrupt our game consequently.
It was the 70. minute when Augsburg actually scored. The referees decided that it was an offside goal though and so the game was still lacking a goal. It would not get one anymore on this day since Großkreutz missed a great chance to score as well (60. minute).
It was not like the game was boring, it was a tensed game and Augsburg showed the effort you need when you do not want to go back down into the 2. Bundesliga. It was, however, not the day and not the game of our Borussia on that day. They did show effort as well, but were definetely lacking the concentration and the drive of the previous games. Our offensive players did not find any answers against the strong playing defense of Augsburg on this day.
After 92 minutes referee Kircher decided to call it a day and hence the game ended nill-nill.

As pointed out at the beginning, if anyone had actually thought that we would march through to our next championship victory this year, that person should have his brain checked out. Augsburg is a team with great passion and should not be underestimated. I do not think that our team did exactly that on this day, I simply believe that they had a bad day and could not play the way they surely had intended to the days before. But that's alright. We were undefeated for quite a long time and still are, a point in Augsburg is not the end of the world and I am absolutely sure that our team will do better next week when Bremen is our guest in the beautiful Westfalenstadion.
Come on boys, there is a new game next week, at home, and the whole stadium (with a few exceptions of course) will be right there to support you.