Pride comes before the fall! 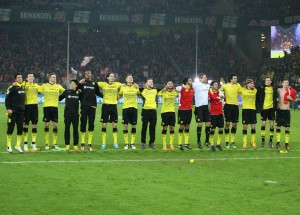 The last weekend was definitely one that encouraged all the BVB fans to dream. The dreamers already chilled the beer for the championship and DFB cup celebration, whereas the realists among us invoked to rationality and referred to the wise and acknowledged statement "Pride comes before the fall". Time for a Warm-Up out of the phrase book.

Fact is, the situation never looked as good as it currently does for our Borussia (Don't cross a bridge till you come to it!). After scoring for the eight time in a row, our Borussia is still undefeated in this second part of the season and the table lead with 7 point distance to the second place has never been as comfortable as it is at the moment. Fortunately, the other three of the current top four clubs paved the way for this lead as they all had to accept a defeat last weekend. Bayern Munich (Money isn't everything!) was unable to defeat Bayer Leverkusen (the latest victim of solo-entertainer Messi), Sch***e 04 (I wouldn't live in that dump if you paid me!) proved once more their unfounded ambitions after losing 2-1 in Freiburg and Moechengladbach (All good things come to an end!) seems to suffer from the effort they invested in their last matches and got defeated during the last minutes in Nuremberg. To sum up: he deserved the break! 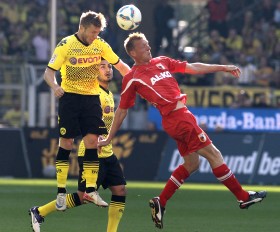 Nevertheless, honesty is the best policy: for both dreamers and realists count that there are still ten games to go and 30 points to get. The undoubtedly good table position should not divert from the fact that there are just barely two-third of the total season played and Dortmund still has to play against the above-mentioned top three clubs who will desperately fight to get the lost points back on their account. And there will also be these kind of debilitating games against several clubs of the relegation-threatened zone as e. g. FC Cologne (Rats desert the sinking ship!). One of these clubs is our next opponent this Saturday evening: FC Augsburg.

Augsburg, currently on the 16 place always puts up a good fight in their first year in Germanys highest football division. Especially the second half of the season does not really represent their current table position. Under the motto: Do lunch or be lunch and better late than never, it seems that they have accepted the fight against relegation and are desperate to retain their chance to play in our Westfalenstadion again next year. With one victory and four draws in their last six games and no home game lost since the 26th November 2011, a positive trend is definitely recognisable and their performance curve shows upwards. With eleven goals they also scored 3 times more often then Bayern Munich in this second half of the season so far. In total, a tough challenge for Juergen Klopps Squad. 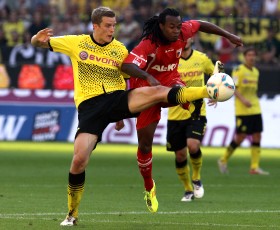 It takes two to tango

Our squad meanwhile is prepared for the challenge that Augsburg has to offer. Beside Robert Lewandowski and Lukasz Piszczeck who both have been questionable to play during the week, Moritz Leitner is fit again and also Sebastian Kehl returns on the pitch after his booking ban. Juergen Klopp meanwhile still belongs to the realists and does not count chicken before they are hatched. He already admitted that the FC Augsburg from the first half of the season (in which the BVB defeated Augsburg at home 4-0) is not anymore and that it will be hard to score. But Klopp and with him the whole team still seems to know that there is a long way to go until the thirty-fourth matchday is played and the final account is made. Let us just hope that they do not drop a brick in Augsburg, but therefore counts: no pains - no gains! So come on black and yellow, put the pedal to the metal and keep on scoring for us so that both, dreamers and realists can say in May: All's well that ends well!