Michael Zorc - Borussian from A to Z 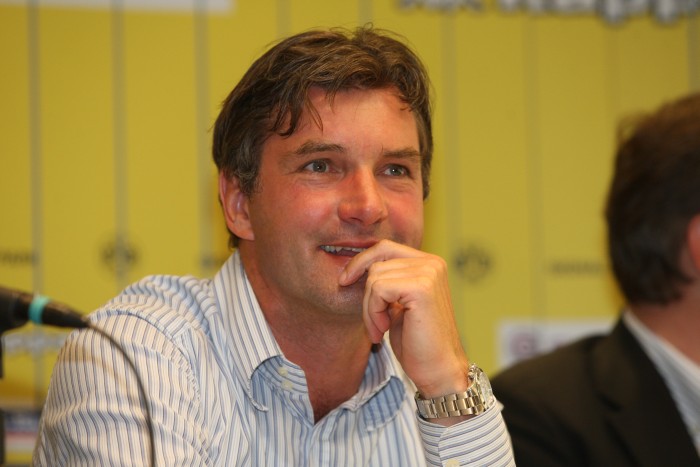 Things look promising for our Borussia with the start of the second leg in season 2011/2012! Currently on top of the table in the league after four wins in a row and in the cup our team entered the semi final. Additionally there are more good news regarding our coach and our club's management. Yesterday Borussia extended the contract with CEO Hans-Joachim Watzke until 2016 and two weeks before coach Jürgen Klopp and sport director and "Dortmunder Jung" Michael Zorc extended their terms of contract as well for four more years.

Today schwatzgelb is trying to present you some more background information about Borussia's manager. And there's no doubt, "Dortmunder Jung" Michael Zorc's career as player and as well as manager is closely connected with the ups and downs of our club's chronicle from the beginning of the Eighties until now. The former central midfielder's vita is the story of a full-time Borusse or respectively a 1909 % Borusse! In 17 years with 463 games and 131 (!) goals between 1981 and 1998, Michael never changed the club. He is in respectably society on the exclusive list of one-club men like Jack Charlton, Paolo Maldini or Fritz Walter, only to name a few.

Evidently inheritance of talent played a decisive role for Michael Zorc. His father Dieter Zorc made 32 matches as international for the German amateur team and in 1971/72 he was a member of VFL Bochum's Bundesliga squad. Born 1962 in Dortmund, Michael Zorc started his football career for TuS Eving-Lindenhorst, a club located in the north of Dortmund. In 1978 he changed from that suburban club to Borussia Dortmund and joined Borussia's professional team in 1981. The same year he won together with his Borussia-teammate Ralf Loose (now coach in Dresden) the UEFA U-19 Championship and the FIFA U-20 World Cup. He made his professional debut in October 1981 against Werder Bremen and from his second season onwards "Susi" was an automatic first choice. "Susi"? The nickname for Michael Zorc will be probably for good and all. Former defender Rolf Rüssmann, who played from 1980 until 1985 for Borussia created the name because of Michael's long hair in the beginning of his career. Over the years Michael's hairstyle changed from long to shorter hair but his importance for the team became greater and greater. From 1988 to 1996 the midfielder was Borussia's skipper and until 1997/1998 Borussia's specialist for penalties. With 49 penalty goals Michael Zorc is the most successful penalty taker of Borussia Dortmund and with 131 goals in total he is Borussia's second best scorer behind Manfred "Manni" Burgsmüller with 135 goals in 1976 – 1983. 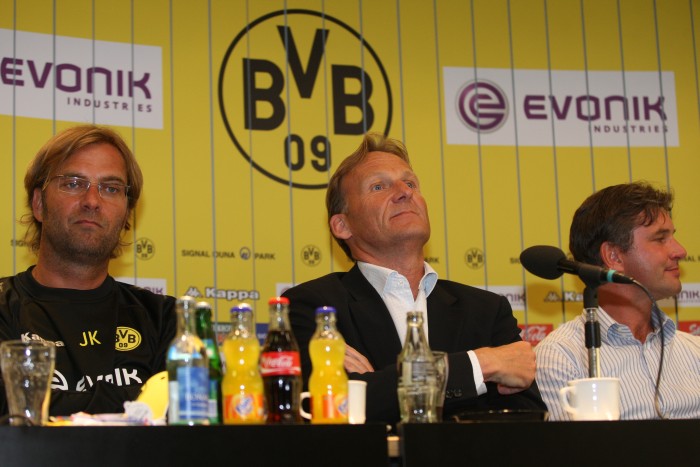 Outstanding also his 64 European Cup matches with 13 goals for black and yellow. Michael's greatest successes were winning the Bundesliga championship with Borussia Dortmund in 1995 and 1996. Not to forget his solid part in the cup final against Werder Bremen in 1989, when Borussia became cup winner for the second time after 1965. He was also a member of Borussia's team winning the UEFA Champions League in May 1997. Unforgettable for every Dortmund fan - and for sure also for Michael - when Dortmund's fans called out for "Susi" during the end of the second half of the final against Juventus Turin in Munich. Another memorable moment which many fans still have in mind was the derby against Sch...e also in May 1997. Former BVB coach Ottmar Hitzfeld's line up didn't include the now 34 years old Michael Zorc. For sure, the maximum penalty for a lifelong Borusse spending time on the bench against the suburb team from Gelsenkirchen. After joining the green in minute 75 he hammered the ball 9 minutes later into Sch...e's goal, the 1:0 win for Borussia!. His teammates Kalle Riedle and Jürgen Kohler had to hold Michael before running to Hitzfeld to demonstrate him his feelings probably in a mixture of rage and delayed gratification. Maybe, they saved him from a foolery which could have been enough stuff for the boulevard press next day. Who knows? But every Borusse will fully understand Michael's reaction. At the tail-end of his career Michael even won the Intercontinental Cup with Borussia Dortmund against Brazilian champion Belo Horizonte and scored the 1:0 of Borussia's 2:0 win in Tokyo. As an international Michael Zorc played seven times for Germany. Already 30 years old he debuted in a friendly against Brazil in 1992. In interviews years later he mentioned his disappointment about former national coach Berti Vogts, who never informed him about the reasons not to be capped for more international matches. In May 1998 Michael Zorcs career as BVB player ended. In his last home match against Hamburg he left the green in minute 62 and 55.000 viewers in the "old" Westfalenstadion wished him good-bye with standing ovations.

From one day to another his employment for Borussia changed from the green to the desk in Borussia's office building. At nearly 36 years he became general manager of Borussia Dortmund. Not an easy task for him, especially in the first years of this new job. During the "Niebaum era" until the end of 2004, Michael's job was more the job of an assistant, supporting the former president Gerd Niebaum and manager Michael Meier. From 2004 until 2005 he shared this position with former BVB defender Stefan Reuter. But after predictable disputes about competences and due to Borussia's big financial crisis, Reuter left the club. 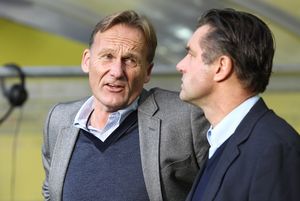 Michael stayed, but was very often criticized for his transfers of players and coaches. Media but also a lot of Borussia fans agreed that Michael was the main responsible person for many transfer flops. To be honest, yes, there were a lot of flops when we think about coaches like Jürgen Röber and Thomas Doll or players like Philipp Degen, Matthew Amoah, Delron Buckley or Steven Pienaar. Unfortunately it was Michael's fate to stay in focus of all the critics, but let's not forget that Niebaum, Meier, later Reinhard Rauball and Aki Watzke, together with various coaches were also involved in all transfer decisions. We also have to consider that these were all transfer decisions in years with extreme low budgets for our club. And let's all keep in mind that there were also a lot of successful transactions like Alex Frei, Tinga, Kuba or the transfer of David Odonkor to Real Betis Sevilla in 2006.

It was Aki Watzke's decision to continue with Michael as Borussia's manager and he even enlarged his area of responsibility. That this was an excellent decision showed the following years and all criticism became silent. To hire Jürgen Klopp as Borussia's new coach, together with Aki Watzke in 2008 was definitely one of Michael's greatest coups. Together with Jürgen Klopp and Aki Watzke he created the base for Borussia's success story during the last years. This success story surprised the complete Bundesliga: a young team with comparatively low costs but highly effective! A total different strategy compared to Borussia's way during the "Niebaum era" or compared to the current strategies of other clubs. Neven Subotic, Mats Hummels, Shinji Kagawa, Robert Lewandowski, Lucas Barrios, Kevin Großkreutz, Sven Bender, Mitchell Langerak, Felipe Santana, Lukasz Piszczek, Moritz Leitner – these are not only names of Borussia's current squad! These players and their benefits are also evidence for Michael Zorc's high efficient work! And the future shows great promise! The transfer of Marco Reus from Borussia Mönchengladbach to Borussia Dortmund or better back to Borussia Dortmund could be the next milestone! Some may say 17.5 million Euros for Marco Reus means a fall-back to old mistakes with much too high investment and costs but from today's point of view Borussia's management made the right decision. Beside Mario Götze the former BVB youth team member Reus is for most experts and football fans the greatest talented German kicker. So instead of critics a big compliment to Michael Zorc for convincing Marco Reus to sign a contract in Dortmund! Sure enough – Germany's record champion in the south of Germany will be extremely jealous not to see Marco Reus in a red jersey.

So, back to my introduction: Let's all be glad that Michael Zorc together with Jürgen Klopp extend their contracts until 2016! Together with Aki Watzke these "Magnificent Three" are the best example for a perfect teamwork!
And for statisticians here's finally a table about Michael Zorc's honours as BVB player. An awesome career: