The silence of the lambs 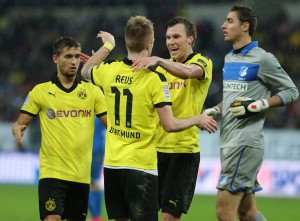 This weekend‘s match was about much more than football. Though we came back with 3 points after winning 3-1 in Hoffenheim, but there are some other topics to be discussed. Last Wednesday DFL, the German professional football leagues' reigning body, and DFB announced a new security guideline, which will have impact the our football experience of all of us.
The most discussed points are surely the option, that for some so-called high-risk matches the amount of available guest tickets can be shortened. Normally 10% of stadium capacity are sold to guest supporters. With this new rule, there will be games with 5% or even less guest supporters. Especially for big clubs with many fans on the road this is a big blow. Another point the the possibility of full body searches at the entrance gates. Of course security is a serious topic, but nonetheless every citizen has personal rights resulting out of our consitution. So all in all many BVB supporters refused to cheer for their team as a protest against these new guidelines and so the atmosphere was somehow scary as the stands were silent.

Nonetheless there was also some football to be watched. Borussia Dortmund‘s supporters had mixed feeling about this first half of the season. While the boys did their duty in this season‘s DFB cup and were brilliant in Europe, the record in Bundesliga was not really fantastic. Of course they stilled played many nice matches and were the better side most of the time, they missed out on to many points. So at all 27 points of 16 matches were ok, but adding another 3 points in Hoffenehim wouldn‘t hurt at all. 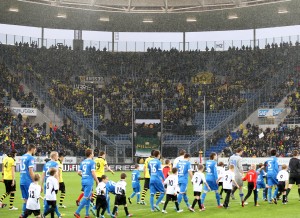 Jürgen Klopp had to cope with some injuries and illnesses. Sven Bender, Sebastian Kehl and also Marcel Schmelzer were missing. As also our second leftback Chris Löwe was injured, Jürgen Klopp needed some creativity. He finally fielded Kuba as leftback! Gündogan and Leitner made up out holding midfield, while Großkreutz, Reus and Götze played behind sole striker Lewandowski. TSG Hoffenheim are in a difficult situation at the moment. They have lost the last 5 matches in a row and are on spot 16 only, which would mean relegation battle at the end of the season. Last week coach Markus Babbel was dissmissed and Frank Kramer took over. Kramer made some changes compared to last week. Weis, Schipplock and Spröck played instead of Roberto Firmino, Derdiyok and Williams.

The match in front of a capacity crowd of 30.150 spectators started hectically. Borussia Dortmund was trying to get early control, pushing Hoffenheim deep into their half. Nonetheless the Kraichgau side played some fast counter attacks. And it was Hoffeneheim who had the first approach. In minute 11 Salihovic fired a 22 metres freekick, that was deflected in the end. On the other side young starlet Mario Götze took a shot from 15 metres distance, that was saved by Hoffenheim goalie Casteels. Some minutes later Hoffenheim forward Volland played a pass to Schipplock, who was stopped by Mats Hummels. A more dangerous situation emerged in minute 17, when a freekick by Rudy wasn‘t cleared by BVB goalie Roman Weidenfeller. Fortunately Hoffenheim‘s defender Compper missed the goal with his header. Minutes later Schipplock had two long distance shots, that were wide. While both teams started to neutralize each other, it was Mario Götze who made the difference. In minute 26 he took a pass by Moritz Leitner on the left wing. Götze entered the box and fired a powerful shot into the near corner, no 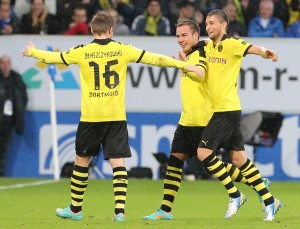 chance for Casteels - 1-0 BVB! Truely a magnificient goal as the shot was out of the blue. Hoffenheim reacted and raised their effort. Only 2 minutes later a high cut-in into BVB‘s box wasn‘t cleared properly by Kuba and Schipplock was nearly able to finish. Thanks to a combined effort by Kuba and Subotic the ball was cleared. Reus set up a nice one for Robert Lewandowski, but the Polish national striker was denied by Casteels. It was again Hoffenheim‘s turn. Johnson paced down the left side. His cut-in was prolonged by Volland and Schipplock in front of the goal had no problem to score - 1-1! The match didn‘t offer anymore highlights until halftime break and so both teamswent into their changing rooms.

Borussia Dortmund didn‘t make any changes and started eagerly into the second half. A first approach by a BVB freekick was stopped as Subotic commited a foul in Hoffenheim‘s box. In minute 53 Marco Reus suddenly appeared in front of Casteels but was denied. Central defender Mats Hummels tried a powerful shot only 1 minute later, but was also denied. Borussia Dortmund did better in minute 58. Mario Götze played a fine pass, that found Marco Reus in Hoffenheim‘s box. The agile national forward didn‘t play selfish but played a short pass past Casteels, that was no problem for Großkreutz to convert - 2-1 BVB! Curiously Kevin Großkreutz didn‘t celebrated as a contribution to the supporters‘ protest on the stands. Robert Lewandowski wanted to raise the lead in minute 61, but his header was wide. 5 minutes later he did better. Gündogan‘s pass found Lewandowski in front of Hoffenheim‘s goal. The Polish national player dribbled past Casteels and scored from narrow left angle - 3-1 BVB! Borussia now lowered the pressure a little bit and still TSG Hoffenheim wasn't able to create any real danger. On the other side Hummels took a nice header following a corner kick by Marco Reus, but again Casteels cleared. But all in all there wasn‘t anymore highlights in the last 10 minutes and so referee Florian Meyer blow the final whistle. 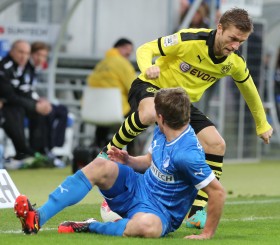 Frank Kramer: “The boys gave it all. You can‘t blame them. We will now discuss everything.“

Jürgen Klopp: “It was a hard fight. We didn‘t play good in the first half but got back in style.“