Only two Days of Rest 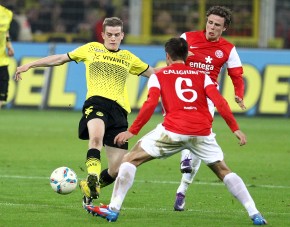 Only two days of recuperation remain after the brilliant match in Amsterdam, despite the fact that Borussia Dortmund established a new record. During the match against AFC Ajax, our players covered a distance round about 127 kilometers – corresponding to the performance on Wednesday – new Champions League record! The next opponent is going to be FSV Mainz 05 on Saturday afternoon and it is quite unlikely that skipper Sebastian Kehl as well as Sven “Manni” Bender will be able to follow the Black and Yellow travel group to Rhineland-Palatinate.

While Kehl is still afflicted with an irritation of his knee, Bender picked up another face injury on his list. Once more an elbow caused him a painful injury that makes a participation within the match on Saturday nearly impossible.

Asked on the health situation of Bender, coach Jürgen Klopp said on yesterday's media conference that “his situation is as good as can be expected under the circumstances. The reduction of swelling has already started. Everything points to an nasal bone fracture.” After one night of rest we can confirm Klopp's assumption but add, that Sven Bender will be probably able to travel to Mainz on Saturday, according to team doctor Markus Braun. 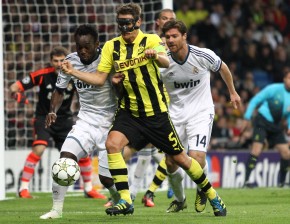 Nevertheless the absences of both defensive midfielders, according to Klopp, would evoke ”two problems for one starting position.” Still it would be enough time to recover and all hope was not abandoned by now. Joking Klopp added: “Maybe the protective mask of Sebastian Kehl also fits Sven Bender!”

Should both players not be able to play against Mainz 05, Klopp and his staff will find a solution. Croatian international Ivan Perisic as well as German U21 international Moritz Leitner will both be an option and if it comes to the worst, be ready for battle.

Asked on the switch from Champions League to Bundesliga and possible difficulties in concentration, Klopp replied that it is not hard to focus on the match against Mainz 05. Borussia Dortmund is in a good shape and it is the aim to continue the triumph. “Still we didn't have the feeling to have a celebration. It was a beautiful evening in Amsterdam - we don't have to play it down - but Mainz is going to be a hard task due to their strength in home matches.” 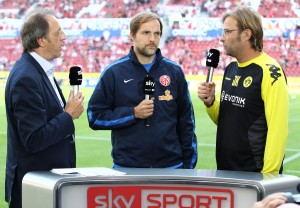 BVB has already dropped points during the season and should stop this trend. But in fact it will not be easy to gain three points against FSV Mainz 05, who is currently ranked on the 8th place in the table. This means to be only five points behind Borussia Dortmund and only have conceded one goal more than BVB. Furthermore our coach added during the media conference: “They celebrate their home fixtures in a special way, but we know how to fight back. It's going to be an intense match against a tactical well trained opponent.”

With the match on Saturday, Borussia Dortmund has to lay once more the foundation of the next season. The championship already seems to be out of reach, nevertheless it is essential to qualify for the UEFA Champions League again. So hopefully the squad will leave the adulation behind, and focuses on the everyday business. There is nothing left to be said.