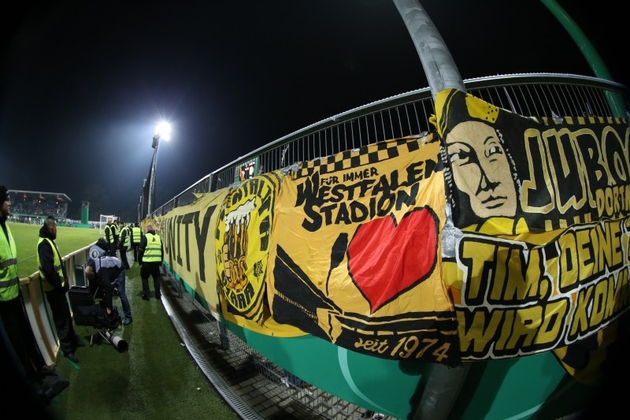 Floodlight. Province. Cup Match. Sounds like an stereotypical evening that results in an early elimination. Of course not. Since the cup victory in May it seems like Borussia Dortmund has left its weaknesses behind. Third round here we come!

Besides long-term casualty Patrick Owomoyela and Sven Bender, who still suffers from an calf injury, all players were fit for the second round of the DFB-Pokal. Due to the exhausting weeks coach Jürgen Klopp allowed himself a little rotation concerning the starting line-up. Skipper Sebastian Kehl and Marco Reus got their deserved breaks and Moritz Leitner as well as Ivan Perisic slithered in the starting XI. As usual Black and Yellow started in a 4-2-3-1 formation.

In the face of temperatures around the freezing mark, Borussia Dortmund needed a few minutes to get into the match. In front of 13,521 visitors it was only the early phase of the game in which VfR Aalen seemed to match BVB. The team from the East of Baden-Wuerttemberg started self-assertive and was able to create scoring opportunities as well as our squad. A long-range shot by Robert Lechleiter (minute 5.) missed the goal but only seven minutes later, when Klauß controlled the ball on the left side of the box, BVB supporters held their breath. He confused the fast-approaching Neven Subotic with his dribbling skills, and let the Serbian look like a schoolboy after he fired from close range. Only through the kindness of Roman Weidenfeller we did not fall behind. 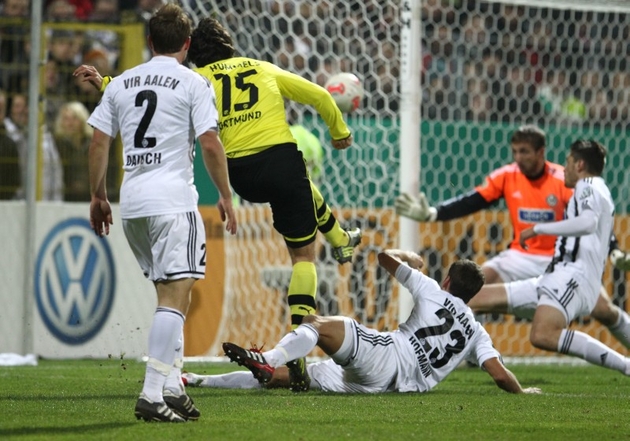 On the counterside of the pitch, VfR Aalen could give thanks to the crossbar when Polish striker Robert Lewandowski only hit iron (minute 17.).Only a few minutes later the time had come and defender Mats Hummels scored the lead from an unusual position. Out from an sharp angle he fired into the roof of the net and as a spectator it took a few seconds to realize that the ball had found its way into the goal (minute 22.). From the lead on Borussia Dortmund took control of the match and when the second defender Marcel Schmelzer scored in minute 32. after a fine combination via Lewandowski and Leitner, it already appeared to me that Aalen swooned.

When the second half started, everyone expected furious attacks by VfR Aalen but it were only five minutes played when youngster Mario Götze finished every dreams of a possible cup sensation. Once more Robert Lewandowski passed the ball exemplary to Götze and the midfielder scored the goal of the night. With a sensitive lob he gave the goalkeeper of Aalen no chance and underlined his word class.

Borussia changed down a gear during the second half but never lost the control. It was as if the young boys on the pitch saved their strength but simultaneously accelerated whenever they wanted to. For instance in minute 79. when Julian Schieber scored his first goal in an official match for his new club. Michael Klaus scored the consolation goal in minute 87. via free kick. Thank you! Otherwise the match would have ended in an ugly 0-3+1! 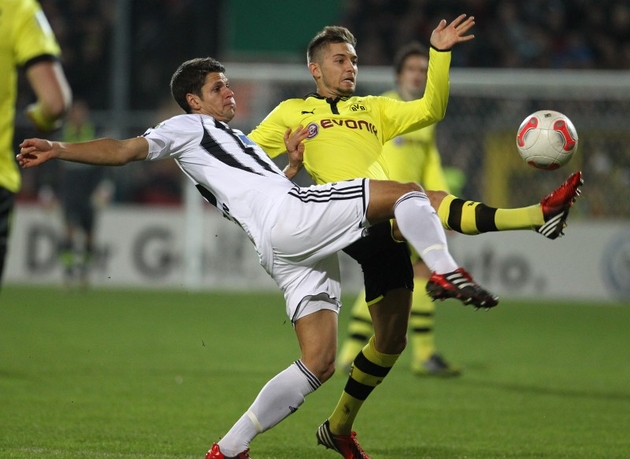 As you can see/read Borussia Dortmund absolved this compulsory task with flying colors and only had some problems in the beginning of the match. Due to the sovereign win there is not much substance for an profound match analysis. The young squad has reached a level that allows it to shift between full throttle and hand brake whenever its necessary. Especially the performances of Moritz Leitner and Ilkay Gündogan are to highlight – both operated perfectly together. Nevertheless it would be unfair and inappropiate to point a finger at one single player. Brilliant teamwork led to success.