Welcome to the candy shop! 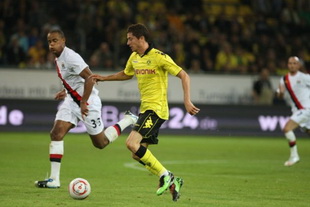 The stage is prepared for another Champions League match. Borussia Dortmund had a good start into the campaign by beating Ajax Amsterdam 1-0 at home. Now the Euro journey brings the black-yellow boys to Northern England, where the reigning English champion - Manchester City - is waiting. The British team have to give it all, as they started with a zero-pointer at Santiago Bernabeu.

*Bling, Bling* What else can you say about Manchester City? A history packed team, that was living in the shadow of mighty Manchester United for decades. Until last season their last league title dated back to 1968. That all changed in 2008. A man with the easy going name Mansour bin Zayed Al Nahyan bought Manchester Ctiy FC for about 185 million Euro. „Mansour bin what?", you might think. Actually this man is part of the reigning family of Abu Dhabi. You know, that small piece of land, that has access to billions of barrels of oil. So Al Nahyan not only bought Manchester City but poured millions of petro dollars over MCFC. All in all they accumulated a net loss on the transfer market of 500 million since 2008...unbelievable! That resulted in a star packed team, that offers so many options on almost every position. In attack names like Agüero, Tevez, Dzeko and Balotelli scare every defense in Europe. Their only more or less weak position might be in goal. Joe Hart is for sure a superb goalie but has also sometimes blue moments. Nonetheless Manchester is a big mountain to climb for us. In Europe they are unbeaten at home since 2008 and they are not willing to give up this record.

Their start into the season was a little bit slow. While their offense is already working, in defence they have still some problems. For example they scored 2 goals in Santiago Bernabeu in their Champions League opening match. Normally that should be enough, to get away with at least one point. But as Joe Hart fumbled in the dying minutes, Manchester City received a fatal third goal. So, Borussia Dortmund will get their chances at the Etihad Stadium in Manchester.

Borussia Dortmund themselves had a not really bad but also not superb start into the season. 11 points from 6 Bundesliga matches are ok but not brilliant. Looking onto the last match against Borussia Mönchengladbach in particular....that was a blast! The fourth-placed team of the last season was trashed in the second half. Former Mönchengladbach player Marco Reus was red hot and scored two goals. Especially the second one was a real beauty as he hit from narrow angle. Nonetheless Manchester will be a much bigger task.

Jürgen Klopp will probably have all players available. In front of Weidenfeller Schmelzer, Hummels, Subotic and Piszczek will make up our flat four. In holding midfield Gündogan will start together Kehl. There is still a slight chance, that Bender will replace Kehl. The young dynamic midfielder is fully recovered from injury and might get a chance. Kuba on the right wing, Götze in the middle and Reus on the left side will start in front of them. Surely especially Reus and Götze might shuffle during the match. Lewandowski, who was on the bench against Mönchengladbach to get a rest, will be back on the pitch, leaving Julian Schieber outside. 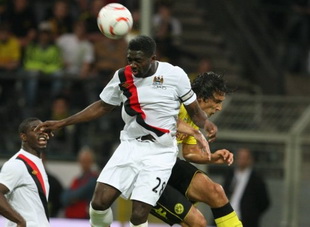 There will be a so called „fan march" from Piccadilly Gardens to the stadium. The march will start at 5.15 pm GMT and will last for about one hour. Manchester police stronly advises everyone to join this march and not approach the stadium on their own. The metro is at all not a good option to get to the ground. There are some pubs that welcome away supporters like „Wetherspoons", „The Brunswick", „Piccadilly Tavern", „Kro Piccadilly", „The Waldorf", „Edwards" and „Yates". You will of course also meet home supporters there, so show respect.