Whereas one half of our squad is currently working determined to get in shape with their national teams for the upcoming European Championship and the other half is enjoying their well-deserved summer break, the operations behind the scenes are in full swing. Manager Zorc, coach Klopp and executive director Watzke trying the best they can to reorganise the old, new and hopefully future champion with contracts that have to be extended and players that have to be substituted. Fact ist, there will be changes and the old squat wont filed in the same line-up as last season. Lets take a look at the latest transfer decision and what we still can expect until the end of August.

Let us start with the initial situation. As already mentioned a few weeks ago, Lucas 'Pantera' Barrios transfered to China and left the BVB due to his wish to again play constantly in the starting line-up, a desire that could not been met in the past season with such a strong Lewandowski (21) on the pitch. During the winter pause, the BVB also already announced the transfer of offensive mid-fielder Reus (22) and young talent Leonardo Bittercourt (18) from Energie Cottbus. Also earlier, the club signed a contract with young Australian defender Mustafa Amini (18) from Central Coast Mariners who will join the club this summer. Necessary and promising investments that show that the BVB early enough started to take care of an ongoing successful future. However, these investments were also necessary as the contracts of Jakub Blaszczykowski, Felipe “Tele” Santana and Shinji Kagawa are about to expire in 2013, a dangerous mixture if combined with the fact that the overwhelming squad performance over the last couple of month attracted the attention of several European top clubs to have a closer look at our player pool.

To start with some bad news we can assume that Shinji Kagawa will most likely leave the BVB in direction to the United Kingdom, more particular to Manchester United. In the first quater of the year, Shinji already rejected to extend his current contract and two days ago the German soccer news paper "Kicker" reported that Dortmund and Man. United have sealed the deal. For round about Euro 15 million, Kagawa will transfer to his favourite club. The majority of fans have hoped that he will still remain in our squad for another year before he makes his big entrance in the international top scene, however, if the deal will be made official in the next couple of weeks we all wish him the best of luck and certainly, he will regret this transfer when we kick Manchester United out of the Champions League Quarter-Final next season! 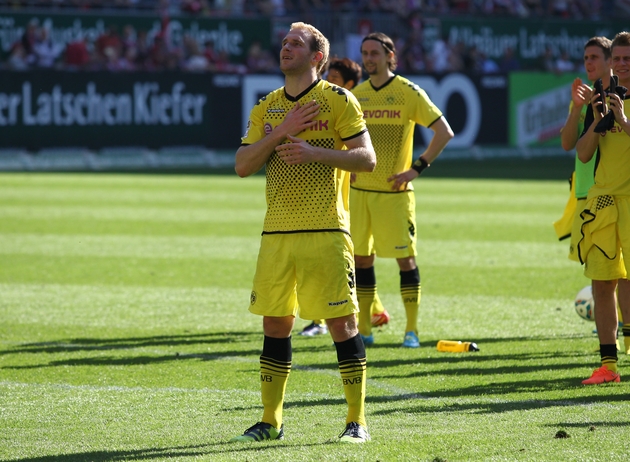 In addition to the expiring contracts, the club also announced that the contracts of Florian Kringe and Antonio Da Silva wont be extended, sending both on the search for a new employer. Many thanks to both players who definitely played their parts in the success story of the last two years, unforgettable the 1 - 1 freekick equaliser of Da Silva second last season versus Hoffenheim in minute 90. + 3. or Kringes once in a lifetime goal in Hamburg in 2006.

With an excellent performance in his luggage and the European Championship approaching, Kuba is one of our players whos future still seems to be unknown. If Kagawa would have extended his contract with the BVB, Kuba would have been most likely to transfer due to the heavy competiton in the midfield against Goetze, Reus and Kagawa. However, his performance, especially in the second half of the last season made him to one of the success guarantors for one of the best season our club has played so far. With Kagawas move on the isle, Kuba would have a realistic chance to defend his place in the starting line-up, in particular if he can sustain his form during the European Championship and into the next season.

During the last week, the 'Corriere dello Sport' reported about a potential interest of Lazio Rome, but until now, no serious enquiry has been made. However, it is quite likely that 'Kuba' will field in our yellow dress again next year, as the premisses for him could not be better: an inspirational young team and coach as well as Polish team mates, two championships and one national cup in the past three years as well as the Champions League redemption as an overall aim. So please Kuba, give us your signature!

Further Extensions and another Striker

As already mentioned in the Short News Section today, Santana, Langerak and Owomoyela extended their contracts and will remain in Dortmund for another couple of years. However, one place on the bench would remain empty; the one of Lucas Barrios. Last week, Dortmund was connected with the Stuttgart striker Julian Schieber, as the 23 year old rejected to extend his contract with the club in Germany's South-West. In the last season after coming back from playing one season on-loan at the German club FC Nuremberg (7 goals, 9 assists), Schieber played a part at Stuttgarts right wing, although his favourite position is central striker.

However, with 2 goals he added his share in the 'legendary' 4 - 4 match in Dortmund. Even if some supporters think that Schieber would definitely not be an adequate substitute for Barrios as he misses some quality, the past have shown that Zorc is an experienced manager who would not attract any players that are not capable of persisting in the squad. Again, the near future will tell us if we can welcome the young Stuttgarter in our team.

Just like in any transfer period, the gossip factory is working overtime. In order to remain internationally competitive and compensate heavy injuries, the squad needs a broader range of top players. There are at the moment several names connected with a possible transfer to Dortmund, in order to end this article here is a short list of them - together with the probability barometer.

Nicklas Bendner: According to a report of Daily Mail, three Bundesliga teams, among them our Borussia casted an eye at the Danish national player Bendtner. However, nobody has a real chance to oust Lewandowski of the striker position at the moment. If also Schieber will sign as a potential back up, Bendner will be off the table. Substance: 25 %

Rafal Wolski: The so-called "Polish Goetze" admitted last week that he was into a conversation with the BVB. He should replace Shinji Kagawas transfer to England, but so far, Wolskis aim is a successful European Championship together with our Polish nationals from Borussia Dortmund. If he will already transfer in the Bundesliga and to Dortmund in particular will probably be decided after the tournament. Substance: 50 %

Aleksandar Dragovic: The talented young central defender from FC Basel is playing on a constantly high level during the past few years and several European top clubs already have him on their list. Even Dortmund was already supposed to make an offer to the 21 year old who would fit perfectly into the squads philosophy. However, as a central defender with this potential and after the extension of Santana, the signing of a fourth brilliant defender becomes unlikely. Substance: 30 %

Luuk de Jong: Beside Moenchengladbach also Borussia Dortmund have casted an eye at the dutch national striker Luuk de Jong from Enschede. He could form the important back up of Barrios if the Schieber deal will not be sealed. Substance: 40 %

In the end, all rumours remain rumours until real offers have been made and contracts signed. It seems that many players will wait until the European Championship is over before they decide about their future. As you can already image, the BVB next season will have a slighty different, probably even more powerful face. Finally, no matter who will come to our club, with those supporters behind one, he wont regret his decision!