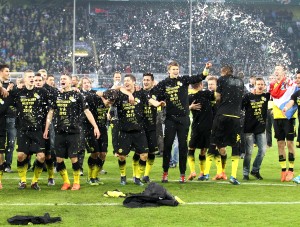 What a week lies behind us. Last weekend Borussia Dortmund managed to become German national champion again with a 2:0 victory against Borussia Moenchengladbach, two matchdays before the end of the season. An extraordinary performance indeed, especially because no one - neither us supporters, nor the media or officials - really thought that Dortmund could defend their title against the 'Force' from Munich this year. However, there are still two more season games to play and after that, one National Cup to win. With two more season victories, starting with this upcoming match against 1 F.C Kaiserlautern, Dortmund could end the season with 81 points in total and thereby equal Bayern Munichs 79 points record from 1973. Nothing really essential, but definitely worth a try and something to look back to proudly after the season.

After the championship victory on Saturday that turned the city in black and yellow, the squad together with all officials and coaches celebrated at their favourite Italian restaurant in Dortmund and some players have also been see in the city afterwards. 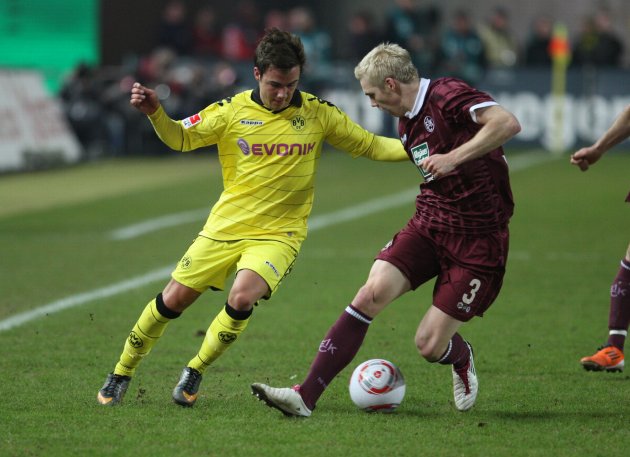 However, Juergen Klopp cancelled the training on Monday to give the players a little bit more time to regenerate and stated at the press conference that everyone was back again on the training pitch punctually on Tuesday (even Kevin Grosskreutz, who was rumoured to be missing until Thursday due to the extensive celebration). Klopp further stated that the team is totally aware of the importance of the last three games and that there is a lot focus on these matches; everyone is totally willing to equal the record as well as to win the Cup to end the season in the best way possible.

At the beginning of the week Sebastian Kehl was worried about pain in his tigh and although he could train during the week, his appearance on the pitch remains questionable until tomorrow. Certainly missing will be Jakob Kuba who suffers from a serious cold flu. The again healthy Mario Goetze could be substituted for him. Marcel Schmelzer appearance is also uncertain. Further, it is possible that Sven Bender will remain on the bench to give him some additional time to cure his clinched rip in order to have him at 100 % for the Cup final.

Our opponent 1. FC Kaiserslautern is already mathematically relegated. Sadly, you have to admit, because with Kaiserslautern another traditional club has go down in the second league. However, due to the relieved pressure from the relegation fight, Kaiserslautern can play with free minds and nothing more to worry about. That this relieved pressure can do wonders could be seen in their last game against the still relegation threatened club Hertha BSC, which won Kaiserslautern with 2:1. In their last home game of the season it is therefore assumable that 'Lautern will try everything possible to have a worthy farewell from the first league. It will be exciting how both squads will be perform on the pitch under the given circumstances. 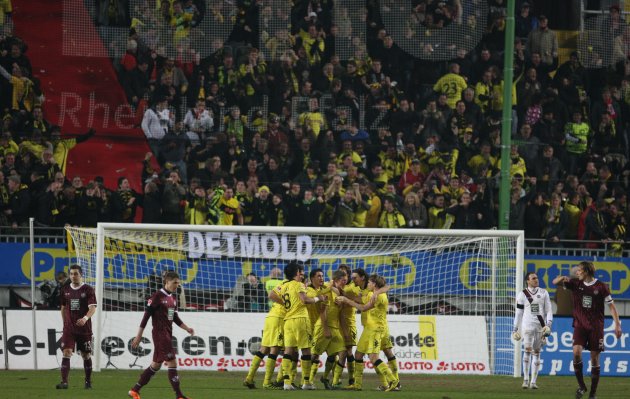 However, the odds are on our side, as always when the table leader plays against the bottom-placed club.The conditions for this match definitely promise a great afternoon. The ticket contingent from Dortmund is completely sold-out, as well as the stadium will be for the last Kaiserslautern match in the first league. Furthermore, summer moved to Germany, promising a champion-worthy weather.