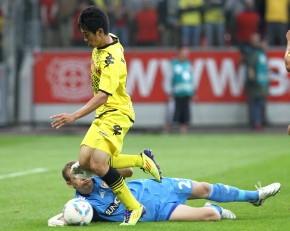 Borussia Dortmund is on fire and with the chemical giant’s personal pet-club Bayer Leverkusen coming to town, that promises a explosive reaction. It is hard to imagine things looking better as they are right now for our Borussia. We’re at the top of the table with 3 out of 3 wins for 2012. Holstein Kiel was beaten they way they deserved and with not even the slightest doubt by the young guns. The total now stands at a impressive 14 game streak without loss. We’ve all learned to ride the waves as they come over the last few years but we would not be true Borussia Dortmund supporters if there wasn’t the little voice inside our heads warning us. Life isn’t always chocolates and roses. Unless you’re Bayer and have access to an unlimited supply of happy pills of course.

Matches against Bayer Leverkusen have always been something special for Borussia Dortmund. Somewhat odd considering that the club itself is the exact opposite of special. A dictionary definition of boring or unexciting could easily refer to Bayer 04 Leverkusen as a prime example. It’s not that Bayer is particularly hated. I would argue that they are even too boring to be hated with any passion. They are just plain not what the Bundesliga needs. A tiny fan-base in a tiny stadium with virtually no atmosphere. Funded by the chemical giant Bayer, the club may not be physically on drugs but the concept of a “Werkself” (Corporate squad) seems a bit like cheating to many a passionate football supporter. 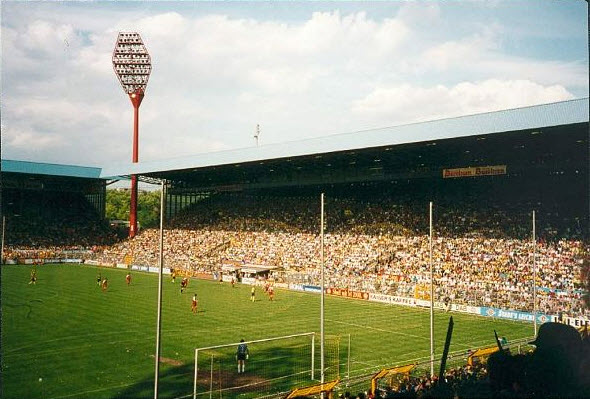 Before I loose myself too much in ranting, back to the “special” matches against Leverkusen.
I still remember it like it was yesterday. May of 1993. I was barely 11 years old when I first entered the temple of the Westfalenstadion. Back then still officially named correctly and seating (and standing) a roaring 42,800 spectators. I had seats on the main stand, only a few rows from the pitch. Seated just a bit closer to the north end than the famous Südtribüne. I faintly remember Ulf Kirsten scoring the lead for Leverkusen by breaking away and being one-on-one with the hero from Auxerre Steffan “Stoffel” Klos. I was very impressed. I didn’t know any better (yet). Leverkusen ended up winning 1:2 with Dortmund’s Uwe Grauer scoring the tie before Hapal scored again for Bayer. The game featured such BVB 90’s greats as Matthias Sammer, Michael “Susi” Zorc and Michael Rummenigge.

It wasn’t long after - researching this “warm-up” actually - that I learned that on that fateful day in May of 1993, Leverkusen won their first game ever in the Westfalenstadion since the two clubs first met in 1980. It didn’t bother me and shortly after I started to go regularly to the games. Soon becoming a regular on the Südtribüne.

The last meeting of Borussia and Bayer may have ended in a 0:0 tie but was certainly no snoozer. In August of 2008, referee Stark was the key actor in a first-class drama. He failed to send off Dortmund’s own Mats Hummels while showing both Mario Götze and Leverkusen’s Kadlec straight red cards. A clear goal from Hummels again was not given while the referee was busy dealing with the BVB coaching staff. No goals, lot’s of drama and a point each. Going further back in time, many great Borussia seasons featured memorable Leverkusen games. Who doesn’t remember the disasterours 0:2 loss in the first game of the 2010/2011 season that was followed by likely the most thrilling performance of a black-and-yellow squad ever.

A world of difference

Before I get completely lost in history, back to the game at hand. Tomorrow, with the 33rd home game against Leverkusen is coming up, the stats are clearly in our favor with 15 wins, 10 ties and 7 losses. Our opponent has had a mediocre start into the second half so far. While the corporate squad has not been beaten in 2012 so far and has not lost 6 away games in a row, they are only in 6th place. Clearly not up to the expectation of the likely chemical-induced football-delusions that grips the management of this small-town club on a regular basis. Bayer is at risk of loosing touch with the leading clubs and could very well slip into the bleak no-mans-land of the middle of the table. Things have been going better in the Champions League, where Bayer will be meeting FC Barcelona in the round of the best 16 starting in early March. 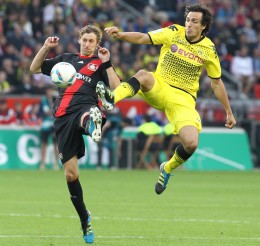 Leading up to the match tomorrow, the situation in Leverkusen has not been improving. Both Sidney Sam and Eren Derdiyok will be out who together scored 10 out of the 28 goals for Bayer in the league so far. Off the pitch, once-great Michael Ballack and his relationship to the coaches and officials of the club continues to make headlines and not in a positive way. The team seems to be off balance, the squad seems to be its own worst enemy.

The situation in Dortmund is clearly looking better. While the game against Kiel was not true test of football skill, it required a bit of skating expertise. Aside from the humorours factor, Dortmund was lucky to walk away withouth any severe injuries. For tomorrow, there are only three light injuries that Juergen Klopp wil have to consider. Gündogan, Jakub Blaszczykowski and Kevin Großkreutz all did not participate in practice as a cautionary measure. Klopp has focussed the team on recovery after the mid-week game in Kiel.
Should the need arise to replace Grosskreutz, who already got a bit of relief against Kiel, Ivan Perisic clearly impressed against the 4th league opponent with two assists and a goal. “I can’t really go wrong with either choice but it is still a hard one to make.” said the coach about his options against Leverkusen.