The week of truth ends with a big bang 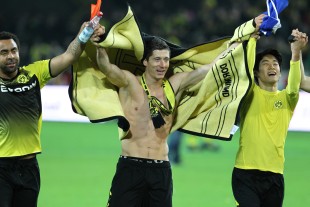 The last game of our week of truth was the most important one out of the three for a lot of Dortmundfans. Because neither Munich nor Arsenal counts when the neighbours in blue and white come to town. Time for the 139th derby! After the devastating defeat on Wednesday and the intense worries about Manni Bender and Mario Götze, one thing was even more sure than it had been the case with other derbys: This Saturday was the day to get rid of all the frustration and to beat out the shit of GE.

Being very unsure if Götze could play after he had hurt his femoral on Wednesday, everyone of us breathed a sigh of relief when it became clear that Mario could join the team against the blue-whites and would form the offensive line together with Kuba and Lewandowski. And Manni Bender, formerly known as „the indestructible“, could at least join the supporters after having had surgery. We're pretty sure that together with Neven Subotic, he'll establish a new trend in football called „boxer face“. Having a closer look at the blue and white ranks in the stadium, one could notice some supporters that were frightened to death. Let's see the good thing about the injury: It is very, very well suited for a derby and specially for our derby. Respect, Manni, we're proud of you! 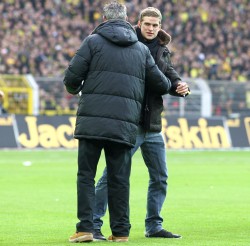 On the field, he was replaced by Moritz Leitner in the defensive midfield. Dortmunder Jung Kevin Großkreutz was surely not very pleased to stay on the bench and give way to Lucas Barrios, because we all know how much he likes to break a Schalker's bones.

The blue-whites did not change their formation of the team that had unfortunately beaten Nürnberg in the previous game. Farfan and Höwedes are still injured and won't return until the second half of the league, with Baumjohann and Uchida (defensive) trying to replace them.

Any form of great nervousness (that usually accompanies watching a derby) and also any form of heartache, remaining of the last game of the Champions League, were immediately played away by the fab eleven in black and yellow: From the beginning on, Dortmund was the much stronger and better team. We had to wait 120 seconds till Marcel Schmelzer's first shot on the goal after a free kick. Smelled like score, and the smell intensified.

I'm still wondering at this point how GE-goalie Unnerstall managed not to faint of nervousness and fear. Like a deer in headlights he saw himself confronted with too many supporters booing him and a Borussia that was far too strong to his taste. The Dortmundfans acknowledged him with applause, and I guess I can say that his performance was at least quite entertaining. Or maybe the fact that his goal-kicks did hardly cross midline was just caused by Raùl's decision to play against the (Dortmund) wind during first half? By the way, to cut it short about Raùl: This decision was the only major impact he had onto the game. 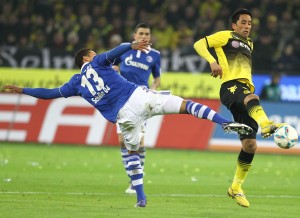 Unnerstall's „recovery“ after approximately 15 minutes did not help the completely overwhelmed blue ones that only focused on their defensive now. And then there it was, our first goal (of course humiliation had begun much earlier, but this one was the first culmination): Fuchs fouled Kuba, and I guess the only person not able to perceive this was, apart from the blue ones, the awful commentator of pay-TV channel Sky, Marcel Reif. With his free kick, Schmelzer brought the ball in front of shaking Unnerstall and Lewandoswki headed it into the goal. Minute 16, first goal – and there could have been much more!

Some people might think that from this point on, the blue ones at least tried to fight back (we're at a derby, after all). I recur to wonderful Marcel Reif here, who towards the end of the first half said „But they're at least trying!“ - nope, they did not,not at all. So GE being no danger at all, my concern was about goalies again, but this time our own one: What would happen to Roman Weidenfeller not having touched the ball a single time? Would he just freeze in the cold wind? Or decide to join the field players, because there was simply nothing else to do? 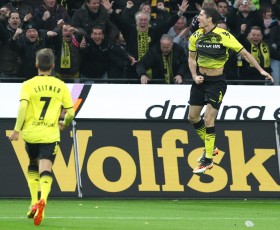 But even without Roman's active help, the blue-white defensive lost ground once again: 29th minute, a pass from Kuba reaches Götze, Papadopolous is of course unable to stop Super-Mario, but Unnerstall wards off the ball. Barrios is one second and three millimeters away from pushing it into the goal though, but in the end it is just Matip he hits. The look on Matip's wimpy face tells us nobody ever wants to meet Barrios steelfoot. And guess what – as usual (though I have to admit that I've never seen GE that helpless) the blue-white frustration made itself felt in terms of ugly fouls. And this should continue in the second half. Suprised, anyone?

Both teams start the second half without any changes. It looked like GE-coach Huub Stevens had explained to his team that the ball is off behind the white line and that he meant something completely different before the game when he said he wanted to see the ball behind the line. After all then, GE was a bit more concentrated when it came to passing. And it almost seemed as if they had realized what was happening around them - DERBY, indeed! But maybe this was not at all an achievement of the team itself but of the blue-white supporters that tried to burn down the Westfalenstadion to wake up their team. And then, in the 53rd minute, we have GE's first innocent shot on our goal by Holtby. Freezing Roman Weidenfeller looked almost a bit happy. 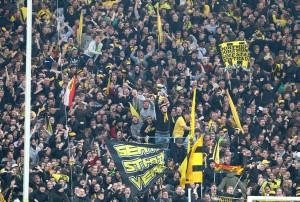 Even if the blue-whites woke up and were not as defenseless as during the first half of the game, our boys seemed to enjoy kicking their asses even more. After two breathtaking chances of Kuba and Götze (59th and 60th), Tele Santana made all black and yellow dreams come true in minute 61. Starting with a corner kick by Leitner (who by the way was very strong during the whole game), Barrios was at first not able to override resurrected Unnerstall, but Felipe took advantage of the rebound, determined to force the ball into the goal from a distance of 13 meters. He shot Borussia into heaven and broke GE's heart (if there even is one). And finally, two minutes before the official end of the game, our beloved Dortmunder Jung Kevin Großkreutz entered the stage, thereby replaced Blaszczykowski and cheered up the Yellow Wall even more (needless to say that temper was already at high point and of course Kevin wanted to be part of the huge party crowd). At the same time, Owomoyela replaced Götze. Meanwhile, the team in blue-white made the impression as if waiting for a miracle, maybe waiting for the remains of the „week of truth“ to show and weaken the Borussians. But no, far wrong: BVB is German champion and demonstrated this fact till the 92nd minute. In the end, there's only one thing to say (and this applies for a lot of situations during the match): You thought wrong, Scheisse 04!

Is there anything better than watching the team celebrate together with the Südtribüne after a well-deserved demolition of the scum in blue-white? No, there isn't. So while all the players jumped onto the fence in front of the Yellow Wall to party and sing, I opened another beer, leaned back and enjoyed those goosebumps that occur everytime the Südtribüne sings. Thank you so much Borussia, this was awesome!To cut a long story short: 6 points in one week. Spitzenreiter. Derbysieger. Good night, blue white.

Subs: Kagawa for Barrios (78th), Großkreutz for Blaszczykowski and Owomoyela for Götze (88th)