Farewell Championsleague, see you next year! 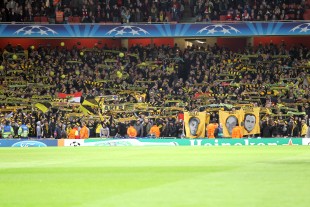 It is not really easy to find the right words for the game on Wednesday, or the feelings that followed afterwards. It was a sad day, in the end, for some reasons. Not completely, but somehow, very sad. And as you can tell from the first sentence already, it is hard to find proper words for the 23rd of November. So let me take you through my days in London, which were absolutely amazing.

I somehow see London as my second home since I spend a lot of time there during the year. So on my arrival day Monday I was surprised that my brother and I were the only obvious black and yellow people on the plane. The same goes for Tuesday. One black and yellow person crossed my path and I already began to wonder what had happened to all those Dortmund fans who had announced to be there- with or without a ticket. But then again, maybe I was just at the wrong places because on Wednesday London was the most beautiful I had ever seen it. It is a wonderful city, you can't deny that. Friendlyness is a quality that pretty much every English person posesses and whatever your aims are to go to London, there's surely always something for you to do and see. 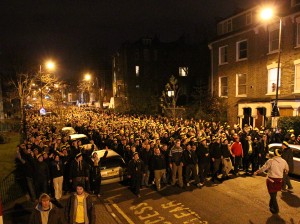 But on this Wednesday London seemed brigther than before. It was a sunny day, but it was something else that struck every persons eye. It was all those people dressed in black and yellow- whereever you went, whatever you did, black and yellow was dominant throughout the whole city. Maybe it is a matter of London having so many football clubs, that everyone was extremely excited about having us there (in hopes for us to beat Arsenal- I met quite a few Tottenhamfans), or maybe it is a matter of the wonderful football we play and the amazing atmosphere we have in our stadium, but at pretty much every corner there was someone who had something nice to say to us. In a café the owner was Turkish and we had a nice chat about Nuri Sahin, at another corner people were interested in the team those nice colours stand for. And as soon as you mentioned: Borussia Dortmund, the common answer was acknowledging. It was a good feeling and chanting and singing and people in a good mood filled the day in London.

Back in September when we played our homegame against the Gunners, we had a nice fanmeeting with a few Arsenalfans. We met on the old market, drank a lot of beer, made our way up to the stadium, and simply had a good time together. In return, those gunners invited us to the famous Gunners Pub at Arsenal before the game. It was a nice gesture since we were later told that no other team's fans had ever been allowed to enter this pub in colours before. Us Dortmundfans were the first to be allowed in there, showing open heartedly whom we belong to and still, this was another wonderful fanmeeting. The Gunners Pub is a very cozy pub that looks like a history classroom when it comes to Arsenal football. Everywhere in the bar you were able to spot pictures from the past decades, everything was held in red, and of course you couldn't miss the Arsenal banners and scarves. But still, the atmosphere was very welcoming and so we had a lot of good chats and chants and laughters with the gunners that night, teasing eachother about the forthcoming game, it rounded up the black and yellow day so far perfectly. We made our way to the stadium around 6:30 p.m, sometime after all the other Dortmundfans had marched to the stadium together. In front of the stadium the situation was, unfortunately, not so pleasent. Long lines before the entrances prevented us Dortmundfans to go in. We made it, just in time, around 25 minutes before kick off. And even though I felt like I was visiting a supermax, they really looked into every corner of every pocket, the security people of Arsenal were immensely friendly and welcoming as well. Finally in the stadium the game was about to start. 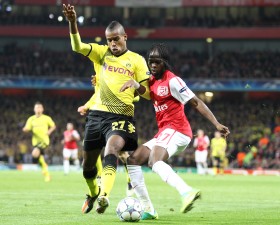 After the incredible victory against Bayern Munich, Jürgen Klopp found no reason to change the formation of the team and so we had high hopes that the team that had beaten Bayern München, would beat Arsenal London as well.

I wish the game had continued the same way the whole day had been, but unfortunately things don't always go this way. Let me tell you in advance: us Dortmundfans? We were on! We were loud, we were eager and we must have left an impression on many people. Our team, however, not so much. They tried, as so often, they tried really hard, but then again, the game started in the worst way possible. We weren't even through with the first half when we already had to say good bye to two of our most important players. After 25 minutes our Manni Bender got knocked out during a duel. He raised his hand straight away, giving the signal that he can't continue. The result of that? A double jaw fracture. Ouch. Our Manni will be out until the second half of the season and from the whole schwatzgelb team we wish him all the best. Get well again soon lad, we need you out there. For Bender, Moritz Leitner came in. Only four minutes later it was Götze, limping for quite a few minutes now, who had to leave the pitch because he had hurt his femoral. For him Ivan Perisic entered the game. Dear Mario, I hope you get well until the game against Schalke. You don't want to miss out on a Derby, do you? 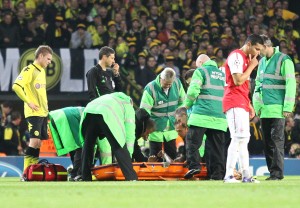 Thirty minutes down, two players down. The worst thing this game brought along was surely not the Championsleague loss, but more likely the loss of our players.Up until the injuries our team had played some rather strong thirty minutes so far. We were eager and pushing. It wasn't a firework of offensive football, but we had followed the Arsenal players tightly and didn't really give them any room to develope their game. On the other hand we didn't really create any offensive danger as well. A weak header by Van Persie and a shot by Lewandowski and another shot by Walcott with quite a good save by Weidenfeller were the only two chances that can be mentioned. Meanwhile us Dortmundfans were singing, jumping, celebrating and supporting our team. One guy behind me had a "Sportschau Ticker" on his phone which read, that our fans performance was impressive. I wish I could say the same thing about the Arsenal fans. But unfortunately there was nothing. Not one sound that came from the, let's guess 53 thousand who were sitting in the stadium. Very poor performance from their side and we can now totally understand why their stadium is called "the library". After those two injuries our team had lost their order for a while, it seemed like our defense wasn't well structured anymore since Bender had left the pitch and our offense found no means to be dangerous in front of Arsenal's goal as well. And yet, there was nothing exciting to report anymore and so both teams decided to take a 0:0 into the break. 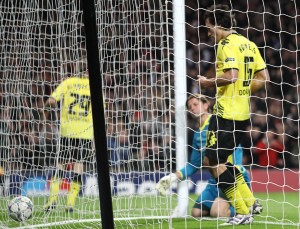 The second half started much better than the first half had gone and Dortmund was no eager to prove a point and create some chaos in Arsenals defense. Piszczek, Lewandowski and Kagawa tried to get that ball into the goal, with quite a nice heel combination as well, unfortunately Arsenals keeper was right on spot and so nothing happened. Only a couple of minutes it went like it had gone so often during this season. We start to make the game, the other team scores. Song's cross, who had simply dance through our lower defense, found Van Persie in the center who headed the ball into our goal. Weidenfeller had no chance. And suddenly for the first time you were able to hear the Arsenal fans. Some "Arsenal, Arsenal" was answered by our "you only sing when you're winning".

But from this moment on our team had lost its order completely. Dortmund didn't know what they were doing anymore more. At times it seemed like they just wanted to get the ball up front somehow. There was no calm and collective offensive game anymore and Arsenal didn't have to worry about us at all. A draw would have been immensely important for us, but instead Arsenal's van Persie decided to score the 2:0 for Arsenal. And once again you could hear the Arsenal supporters. This time they sang a slower and longer hymn and I have to it admit, it sounded great. Dortmund on the other hand decided to stay calm for a second and simply raise their scarves, showing their silent love and support no matter what. Kagawa's 2:1 didn't make a change anymore, this goal simply came too late. 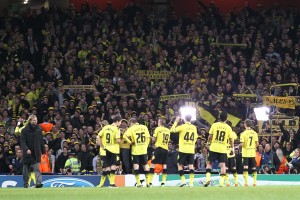 It is difficult to express your thoughts after a game like that. The day had been amazing and us Dortmund fans showed a support that every other fan should take an example on. Our team had some difficulties to face when we lost Bender and Götze at such an early point and unfortunately you could tell that we lost the order in the defense when Bender was out and the offensive impulses when Götze left the pitch. Theoretically we still have a chance. Since Piräus had beaten Marseille, we might as well score a 3:0 against Marseille in our last game and hope for Arsenal to beat Piräus. Not very likely, I know. But there is still some room for dreams.It is alright, you know? The Bundesliga has always been the most important competition and so it remains. If we continue to be among the first four every season and make it to the Championsleague- give us three or four years and whole Europe should be scared of us. Come on boys, bring us the Derby Victory and no one will think about London anymore. And of course: wir folgen Dir egal wohin es geht...

"If the Supreme Being should grant me reincarnation, I hope to come back as a Borussia Dortmund fan. There were 9,000 or so of them inside the Emirates last night, all having the time of their lives. (...) The Dortmund fans, meanwhile, raised the roof for their team, even in defeat. It showed immense class, or emboldened mass drunkenness, or perhaps some combination of the two. Which only made me love them more." (www.thisislondon.co.uk)

"As Thierry Henry leapt from his seat to join the salute, the home supporters loved it, chanting 'one-nil to the Arsenal' but earning a tart rebuke from the German hordes of 'you only sing when you're winning'. All in such perfect English you could almost hear the apostrophe being slid in place. 'We've only got one Song,' chorused the Arsenal fans. Dortmund fans had a whole hymn-book and Europe's elite league will be all the poorer if they go out." (Daily Telegraph)

"To be honest, the highlights of this game so far have been (1) Dortmund's pressing and (2) Dortmund's fans. Word is that many English folks, disillusioned by the high prices and hollow hype of the Premier League, take cheap flights to Germany of a weekend to go watch football there, where the atmosphere is better and the experience more pleasant. Are you one of them? Tell us some stories." (Guardian) 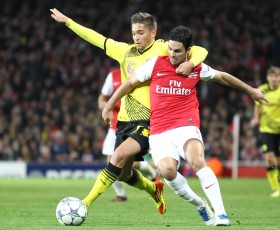