Successful haul up north ? Did we see the champs again? 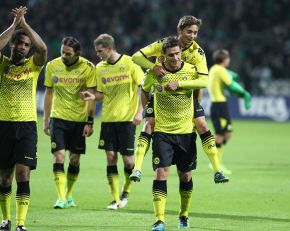 Borussia Dortmund trawled for points at the 2nd ranked Fischköppe (fish heads) from Bremen. And the young-anglers from the Westfalen metropolis managed to take the catch of the day back home even though one man went overboard halfway through the cruise. This important win, achieved with the help of hard defensive work and a little luck, makes you wonder: Did we see the reigning champs get back on the track that took them all the way to the top last season? One thing is for sure, the postulated crisis is gone for good and we are right back where we belong: In the lottery for the Champions League qualification.

Friday night and the black’n’yellow camel train headed up north. Roundabout 6.000 supporters headed from the capital of the tasty golden liquids towards the capital of the stinky fish heads. Luckily the Westfalen had taken precautions and brought the necessary supply of fan beverages with them to avoid having to taste the local saltwater. Still we were nastily surprised by the Werder authorities: Not even the tasteless so called beer sold inside the stadium was allowed in the stands. That made us feel unwelcome right from the start. To see the Weserstadion located right next to the river it is named after with lit floodlight towers is always a beautiful sight. But it is hard to remember the beautiful outside once you enter the guest section of the renovated Weserstadion. The guest sector is located in the upper rank behind the goal and half of the vision is blocked by the giant screen facing the Werder supporters on the other side of the stadium. To get to the stands you have to climb a newly built staircase and you instantly wonder how you get a permit to build such a crap inside a football stadium nowadays. We already knew it from the last away game of the championship winning season and were aware of the problems to get out safe after the match. The steep and slippy stairs and the low railing make it a dubious adventure to climb down those stairs together with a few thousand fellow supporters on a proper level of fan beverages. Hamburg fans already suffered a panic on the way out which resulted in some injuries. 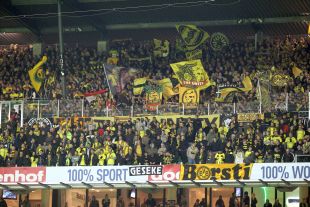 Jürgen Klopp had to replace the defensive wingers Schmelzer and Piszczek with Löwe and Owomoyela. Owomoyela??? Yep right, Owomoyela. The man is still under contract at Borussia Dortmund. That could be easily forgotten since he lost his starting position to Piszczek after a series of injuries. He had not played in Bundesliga for more than 6 months and Jürgen Klopp admitted after the match, that he thought about pulling Großkreutz back to replace Pisczek. Luckily he opted for Owomoyela instead. It was also a special game for Owomoyela on Friday because he has played three years for Werder, but never managed to score a Bundesliga goal for them. Marathon-man Großkreutz was placed on the right offensive wing to support Owomoyela. That meant that Klopp could not play the 4-3-2-1 “fir tree” he usually puts against a 4-4-2 with a midfield diamond as Werder coach Schaaf prefers it. So we got to see the Borussians in the usual 4-2-3-1 line-up. Up front Robert Lewandowski got to keep his starting position and an impatient panther still had to warm the bench. But it is kind of hard for a coach to substitute a striker that is on fire. And Lewandowski certainly is. He scored 3 times against Augsburg and once in both international friendlies for Poland last week. Slippy Neven Subotic also claimed his starting position back from Felipe Santana even though the Brazilian was flawless against Augsburg.

1st Half – Ivan the great

Both teams started on eye level and neutralized each other for the first minutes. Even though both teams had an offensive game plan real scoring opportunities were a rarity. A first try after half an hour by the supposed-to-be-still-tired-after-a-long-journey Pizzaman from Peru was denied by the great Mats Hummels on the goal line. More and more Werder pushed Borussia into their own half, but our defence seemed well organized and Owomoyela played a solid part as well. Weidenfeller looked strong most of the time, but then he tried to clear the ball with his foot and shot it straight upwards, Rosenberg won the header and Löwe had to scrape the ball off the goal line. He cleared it to the side were Perisic fouled Sokratis even though the ball had passed the touchline already and Ivan was booked. 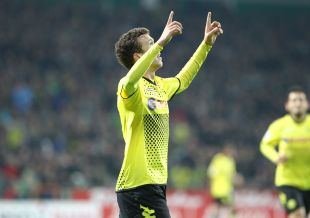 When everybody expected the Werder lead to be just a matter of time and Dortmund struggled to keep a clean sheet at halftime, Borussia ran a counter attack. A long ball from Subotic reached Lewandowski who managed to keep it, even though two defenders put pressure on him. He passed it to Bender who had some technical problems and only managed a sloppy short pass to Perisic. When the situation seemed to be over for Borussia, Perisic just dribbled into the box and hammered the ball over a stunned substitute keeper Mielitz into the short corner of the goal. Ivan just has a perfect shooting technique. That was a tough blow for Werder right before the halftime break and Borussia took a lead back to the locker rooms that seemed a bit lucky. The fanatic Borussia supporters gladly accepted it though and they continued to dominate the terraces with their neverending chants.

2nd Half – Ivan the terrible 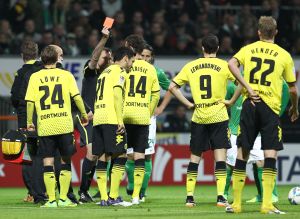 Half 2 had just started when Ivan Perisic saw his opponent from the 1st 45 minutes running towards him again. And again he chose the sliding tackling. He hit the ball but also Sokratis and the Greek performed a salto mortale. The 2nd booking for Ivan the terrible was the logical consequence and Borussia was facing 45 minutes of one man down against the strong Werder offence.

A task that seemed almost impossible, but once more the depleted team fought for the missing man. Werder had possession almost all of the time now and the match took part mostly in the BVB half of the field. But Werder found it real hard to create scoring opportunities. As commentator Marcel Reif put it in German TV: “They are one man down, but if you have Sven Bender in your team you still play with 10 and a half man.” And the offender did what he does best and conquered ball after ball and stopped many Werder attacks seemingly at the cost of his own health. But each time he performed one of his spectacular stunts he got back up and kept going.

So despite of all the pressure they put on the BVB defence Werder managed to only create one big chance. And unlike last season, when we were the aluminium kings of the league and hit goal post and the cross bar all of the time, this season Werder leads this statistic of unluckiness. A shot from Schmitz was deflected by Owomoyela and hit the crossbar. Has the luck of the champions returned to us at Mainz with Lukasz Piszczek’s last minute bouncer? 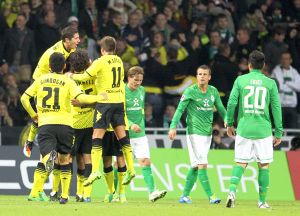 Shortly after that Borussia managed to conquer another corner kick. I turned to my mate standing next to me and said: “With Owomoyela we have our weapon on the short post back…” Löwe delivered the corner, Owomoyela won the header on the short post and the ball got to Hummels. But the organizer of our defence showed that he is no striker and could not get the header onto the goal and also seemed to miss on 2nd try with a shot. But “Uwe” Owomoyela managed to get a foot on the ball and deflected it into the net. Lewandowski seemed to be offside, but the ref thought he was passive so who cares? Ecstasy took over the guest stands and the supporters started to chant the Owomoyela song: “Oooooh wir ham die beste Abwehr der Welt – wir haben Owomoyela, Owomoyela, Owomoyelaaaaaaah” (ooh we have the best defence in the world – we have Owomoyela…). This should become the chant of the day.

Werder was beat and Großkreutz even had to make it 0:3 after a great pass of the strong Robert Lewandowski. But maybe that would have been too much anyways. In the end we were a bit lucky to take the three points home, because the Perisic goal came out of nowhere, but the effort the team put into it being one man down and how they denied Werder any real chance to score made it a deserved win. It even felt like we had seen a glimpse of the greatness of last season. We beat one of the stronger sides of the league at their ground with a strong collective effort. If we can keep this up we can run with the giants again this season.