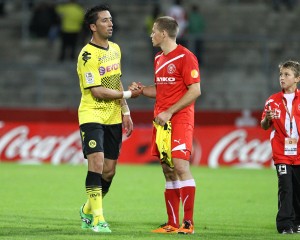 A test match of the reigning champion against a 5th division side should be plain sailing. Borussia Dortmund travelled to Sportfreunde Siegen yesterday to prove this statement wrong. The second row of Jürgen Klopp’s squad was saved from the disgrace of not being able to beat the Sportfreunde in the last possible moment of the match as a header by Sven Bender turned a match around just before the final whistle that had seen the hosts as deserved winners for more than 60 minutes. Panther Lucas Barrios had equalized the early lead by the amateurs before and a draw should have been the least to take home for the brave underdogs.

What to do during the terrible international break? Almost two weeks without any Borussia fix seems unbearable for the dedicated BVB addict, so the option to accompany the team to the 100km distant Siegen for Wednesday’s test match was gladly taken. In the end that was a choice with a bitter aftertaste. To reach the stadium was a first adventure in itself, because local police had closed the main roads towards it. So when we finally reached the V.I.P. parking section it was almost impossible to find a blank spot on it. Luckily we had started our journey 2 hrs in advance so we still made it to the ground in time. And the classic ground Leimbachstadion was quite a nice sight. Located outside the city of Siegen the view from the main terrace was into the nearby woods and all you could see were trees all around. The classical tribune with the only seats of the stadium reminded a bit of the ruin at Hafenstrasse in Essen. That’s the spirit of real football which is so hard to find in those bog-standard modern arenas you have to visit on a regular basis these days. 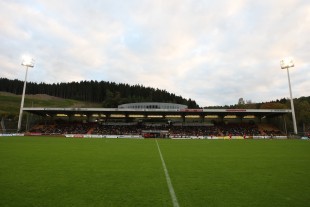 Alright, most of the top stars were on the road with their national teams and Jürgen Klopp was left with substitutes and convalescents to form a team to take on the 4th of the NRW league, which means one division below our U23 reserve team. In the end he managed to field 11 professional footballers who should not have had any problem to deal with the opposition they were facing. Borussia started with Sven Bender in central defence alongside Felipe Santana and Bakalorz and da Silva in CDM. Also the comebackers Owomoyela and Kringe were on the pitch. The latter making a return to the team he originated from.

But surprisingly the amateurs took initiative right from the start and the pros found it hard to withstand their attacks. The first couple of corners of Siegen created no real danger for the goalkeeper from down under, but it was visible how the underdogs gained confidence with every attack. Borussia found no way to penetrate the two defensive lines Siegen presented when BVB carried the ball. The central midfield could not set up any promising attacks and since Damien Le Tallec was invisible once more and on the wings a struggling Kringe and a desolate Kevin Großkreutz were unable to provide any proper balls for him, the panther was growing more and more impatient. He tried to carry the ball forward from the midfield taking on all Siegen defenders on his own more than once. Of course he could not be successful this way. 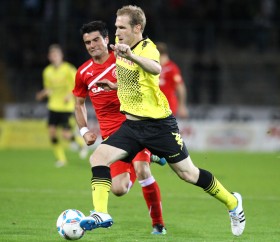 After half an hour the fans were still waiting for Borussia’s first chance of the match. Instead they had to witness Siegen taking the lead. The best Sportfreund on the pitch, Alexander Hettich stole the ball from Bakalorz and sent Julian Jakobs onto a run towards the box. He paced past an indisposed Chris Löwe and left Mitch Langerak with no chance to save his 12 meter shot into the far corner. Jürgen Klopp told Chris Löwe exactly what he thought of his approach and it seemed he had some firm words for his wingman. But the match would not change for the better at all. The rest of half one saw no Borussia chance as well. Only Kevin Großkreutz had his scene of the match. Regrettably there was no ball involved. Grebe fouled Großkreutz and both engaged in a brief brawl. Other than that Kevin had roughly 80% of misplaced passes on offer and not much more. It would have been exciting to listen in on Jürgen Klopps halftime speech, because it was sure more entertaining than watching half one. That might have felt a little different to the BVB players, though.

Half two saw some Dortmund attacks at the beginning that could not create any chances still. Roughly an hour into the match, Klopp had seen enough and included U23 reserve players Jonas Hofmann and Terrence Boyd. Hofmann took over on the right and as Kringe left the pitch Großkreutz moved to the left wing. He did not do any better there. Terrence Boyd whose main strengths are his finishing abilities inside the box had to play behind Barrios. He made the best of this unusual position only one minute in the match, when he conquered the ball and set it up nicely for Lucas Barrios. Finally provided with one proper pass Barrios did what he does best and put the ball into the net. Finally, the equalizer. 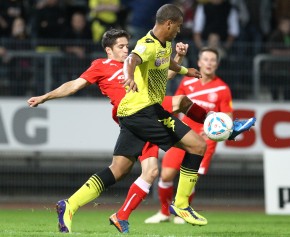 en that was no breakthrough for BVB. The sluggish attacks went on and on and Siegen remained dangerous with counter-attacks. Luckily Langerak had a good day and saved whatever came flying into his box. But it is the hard truth for all those players presumably fighting for a starting position in the Bundesliga 11 that Hofmann and especially Boyd were almost the most striking BVB offensive players on the pitch. There is no real excuse for such a performance and for sure it does not increase anybody’s chances to start in one of the next official matches. Even when Siegen changed the whole team and only their substitutes were on the pitch Borussia did not manage to create any real scoring opportunities.

When everybody was getting ready to call it a day and Siegen maybe lost a bit of concentration Borussia was granted another corner. Löwe delivered it into the box and Florian Hübner, the 3rd U23 player on the pitch by then headed it onwards where it fell onto the head of Sven Bender who converted it for the lucky winner. 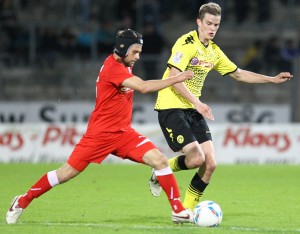 Once again a test match that leaves you with the question, why you take on hours of driving to watch such a crap. But then there’s the addiction to take into account. But these matches are not even something close to methadone. Because methadone won’t give you a kick but it will take the withdrawal symptoms away, these test matches only make things worse. Please, please, pretty please, come fast 14th of October so we can watch some real football again.