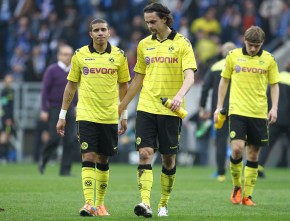 It was certainly not our day that Saturday on the 12. of March. In many ways. It is one thing to lose and another one to play badly. But to lose and play badly against a mercenaryteam like Hoffenheim can actually ruin your day. However, it is possible to get all over that. It gets more difficult when you find out that our Manni Bender won't be able to play in the next 2-3 weeks because one idiotic Hoppenheim player hit his knee into his shoulder. Definetely a day to delete from the calenders.

Since Hummels was still having back problems, it was again Santana who stood in for him, next to Hummels. Despite the little problems Barrios had during the week, he could actually play. So in the end the formation looked pretty much like the ones before, with only minor changes. 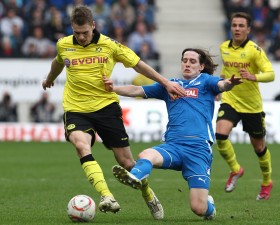 It was a weird first half. It is difficult to say whether it was a good game, a terrible game or simply a nerve wracking game. There were two things that were sure though. Hoppenheim was eager from minute one on. And Hoppenheim is a team full of scumbags. Whenever one of our players went past, they fouled. However, it was not like they did minor fouls, no, they almost ripped off our players legs everytime they went into a duel. Somehow it still seemed like Hoppenheim got into the game a little bit better than we did. They were fighting very hard and you could tellt hat they were motivated, opposite to the previous games they had played. So it was them who had the first chance of the game. In the 12. minute Ibisevic headed the ball onto our goal. The sun was standing deep and it was rather difficult for our Roman Weidenfeller to see the ball. he still got it and lifted it over the goal. In the next minutes Hoppenheim got close to our goal every now and then but nothing really dangerous came from it. In the midfield there were always two blue players surrounding ours., hence they couldn't really play the combinationfootball they used to play. But still our players stayed calm and tried their best to create some chances. Then the 31. minute of the game came and we saw the Borussia that we got to see so often through this season., A wonderful combination between Sahin, Großkreutz and Götze on the left side that ended with a pass onto Barrios. Unfortunately he couldn't exploit it fully. Yet, this was the Borussia we all love and Hoppenheim could only watch and marvel. Now our Borussia seemed to have woken up. Now it was Schmelzer who got close in front of the goal but missed. Only another couple of minutes later it was Lewandowski who wasn't really lucky after a great cross by Schmelzer.

The worst minute though came at the end of half one. In around the 42. minute the commentator of the game said exactly this: "and here is Bender. And that is never a good thing for the opposite player". In perfect words he described the importance of our Manni. In the 44. minute of the game there was a moment that does not happen very often. Our Manni Bender had lost the ball. But rather than giving up, he ran behind the blue player and got the ball back. Of course he did. The blue player however, hit his knee into the shoulder of Bender. The end of the game for Manni. It was not a foul on purpose. It was an accident. Still, Hoppenheims players played so dirty the whole time through that I don't care whether it was on purpose or not. The outcome is worse enough. Nothing was broken but it will still be at least 2-3 weeks that Manni won't be able to play. Quite a shock. Someone like him you can hardly replace. So then, for Bender da Silva stood in. TIme for a break. 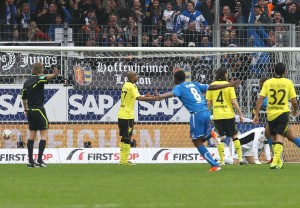 Thinking back, I know I described the first half as a weird half. And it truly was. After the game however, I wished we would have continued to play our game the way we had played it in the first half. We somehow lost focus completely. Only two minutes after the second half had begun it was again Ibisevic who tried to dupe Weidenfeller. Roman stayed unimpressed. With an amazing reflex, he pushed the ball away from the goal. And that was certainly not an easy thing to do in this situation. Around 8 minutes later the very strongly playing Schmelzer ran towards the goal on the left side and decided to try it all on his own. His shot into the upper left corner from about 18 meters distance was perfect. Too bad that Hoppenheims keeper had good reflexes that day. He carved the ball out of the corner before it could cross the goalline. But then it came how it had to come.

Somehow there was a weird feeling wandering around. I wasn't calm, and somehow I had lost the feeling that we would take this game home. And I seemed to be right. In the 63. minute Ibisevic actually made his goal. After so many tries, he finally scored. Our defense seemed to be asleep at that moment because no one was taking care of Beck on the right side who could easily run though and then play a pass in the middle. Santana was not watching Ibisevic closely enough and came 5 steps late. By then, the blue one had already scored. 1:0 for the blue ones. I wish I could say that Dortmund tried everything now. That the played and offensive firework of chances but it was not like that. On this day, they found their master in Hoppenheim. They were always a step faster, always a bit more eager, always a bit more dominant. On this day, Dortmund found no means to actually turn a game around again. They lost too many balls in the center, they had no real drive for anything. It was not their day. Instead it was Hoppenheim who had more chances (79, 84, 87.) In the end the referee gave another three minutes extra time and there was a little bit of hope that we would make a lucky punch. One way or another. Somehow. It we almost did. in the alreay 94. minute of the game there was big chaos in the penalty area of Hoppenheim. None of the blue players were able to kick the ball aways and somehow the ball got in front of Barrios feet. Standing three meters in front of the goal he shot the ball with all the force he had. Unfortunately Hoppenheims keeper Starke had a good day and pushed the ball to the side. It wasn't meant to be on this day. After that, the game was over. 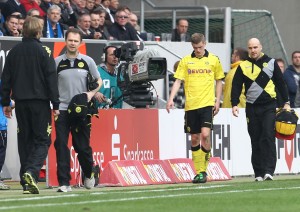 I was quite in a bad mood after the game. It was not necessarily the defeat that annoyed me. It was more the way we played. In the subway I was ranting around, amusing the people around me. The words I used? " I am not used to watching them play like this anymore"....then I came into the bar where I had to work that night. And all those Bremen fans and Stuttgart fans and Cologne fans came to me. They didn't mock me though. All they all said was "Did you actually lose again?" They way they said it made me realize that I don't need to be annoyed and pissed after this game. I couldn't hear any mocking, any gloating in those other peoples words. It was more surprise as well as comforting words. And you only get to hear that from fans of opposite teams if the football you have showed before fascinated everyone. Dortmund fan or not. Our players deserve to have a bad day. We cannot expect for them to just march through to the championship. They will make their way. They simply stumbled a little bit yesterday. I just wish that it hadn't been Hoppenheim. However, all my concerns lay in Bender now. Please get well again very soon lad. We need you on that pitch. So don't get too comfortable.

Next week we will play against Mainz who have to play against Leverkusen today. Let's keep the fingers crossed.