The week of truth - Chapter one: Lecturing the Lederhosen 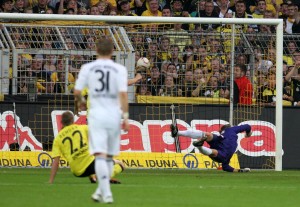 What a desaster it must have been for Bayern's people responsible, for their fans, for their players and simply everyone involved last season. It was painful enough to lose against us- not once, but twice, home and away. But to skip out on the Meisterschale? This is probably how Hoeneß biggest nightmare looks like. Either that or losing a Championsleague final. Whatever it is, Bayern didn't even reach the Championsleague final last season and despite all those confident things that still came out of their mouths by the time Febuary had come, they were of no use. We won the Bundesliga Championship and for us a dream had come true.

This is a new season however, and as much as all of us were aware of the fact that we won't have another season like the last one, we still have high hopes. We were surely struggling at the beginning. Our game against Hamburg and Bayern's game against Gladbach mislead us for a second, but we got right back on track straight away. So, here we are now, facing, as a lot of journalists, but also us fans consider it: the week of truth. Three incredible games lay ahead of us- Bayern, Arsenal, Schalke. Three victories and all of us are probably in heaven. Could we do it? I don't see a reason why not. Could we fail? We sure could. We are in a good state, out team is on. The victories against Cologne, Piräus, Dresden and Wolfsburg were not only good for our confidence but also for the whole situation in every competition. Far up front: the Bundesliga. Personally, I have always claimed the Bundesliga to be the most important competition for me and so it remains. 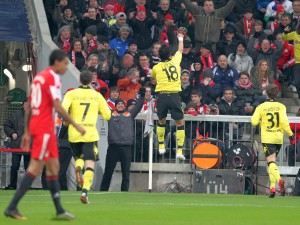 Of course nobody expected Bayern to go down the way the have last season and all of us are well aware of the fact that Bayern is eager. After last season's shame they insist on revenge. Not only in the direct duels but most definetely when it comes to the Meisterschaft again. So far- as much as I hate do admit- Bayern is on a good way. More or less sovereign they have played their part so far and are- as I judge them- not afraid of us. But then again, why should we be afraid of them? We shouldn't. And I hope that Jürgen Klopp gets that message deep down into the minds of our players. If we stick together, like we did last season, this could be amazing.

After Subotic unfortunate elbow date against Wolfsburg, we will have to miss out on our favourite party boy for the rest of the year, but have a great back up in Santana. Marcel Schmelzer will probably watch the game from outside as well due to his injury and will be substituted by our youngster Chris Löwe. Bayern on the other hand will play without Schweinsteiger (injured) and Tymoshchuk due to his red card. It looks like Bayern's defense is thinning out. Funnily enough this game appears to be different than the others before. If we compare this one to the one in Febuary, can't we all remember the fuss that Hoeneß and Beckenbauer and who not had made before the game? All that mocking and teasing, none of it has spread so far. Calm before the storm? Or maybe Bayern takes us serious after all. We will know for sure tomorrow night. 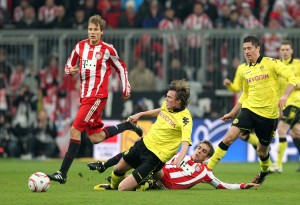 As for now, let us all relax and enjoy the upcoming game. I believe in our team. We will do all we can in order to show Bayern that this season's championship is not secure in their hands already. Let's stick together boys, do it again like you did last season where you drove Arjen Robben and the likes nuts. We will - of course- be there, like we always are, in order to support you.