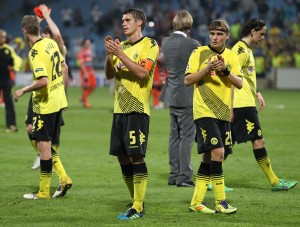 It has been a few turbulent weeks- and quite often we didn't get the outcome we had all wished for. The away games against Leverkusen and Hannover didn't reach our desired happy ending and this week's Championsleague game against Marseille can be seen as a new low in the still very young season. OUr team did probably expect things to go quite differently in France as well- the outcome, however, was a 3:0 hammering and a lot of open questions to answer...

What is going wrong with our beloved Borussia at the moment? Where do all these mistakes suddenly come from and how can we finally get that ball over the goalline? After all the game had started off the same way most of the previous games had started. We play well, we are driven, the other team does really nothing but still scores- so where does all this come from and where can our team build up on? Well, first of all it seems kind of unbelievable how we just can't get that ball behind the goalline. Sometimes it simply seems jinxed. But furthermore we need to start concentrating again. Blatant defensive mistakes must simply not happen again. While our defense was one of our biggest strengths throughout the previous season, it now seems to have lost a bit of its order. And you don't really know why. A mistake like the one Hummels made in Marseille, usually happens to him once a year- up most. Subotic slipping twice in a row? Unusual. And Piszczek playing a cross in the wrong penalty area? Unlikely. And mistakes can happen- of course and our players, as well as we, know that they can do better, we simply need to prove it again. I am quite positive that they will do so this Saturday against Newcomer Augsburg. 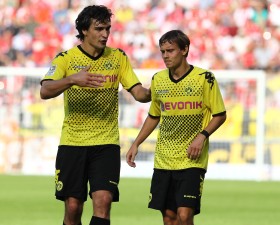 Our opponent from Augsburg hasn't started off well into the new season either. Most definetely a lot worse than we actually have. They are still waiting for their first victory and therefore three points and are hoping to gain these against us. That, however, won't happen. I am sure our team will give it all agian- as they have done so many times before, also during this season. The most important thing all of us have to learn again is how to be patient. Me included. I have to admit that I was quite frustruated after the games against Hannover and Marseille and didn't really know what to think. But this team has so much credit. They suffer as much as we do after games like these. It is important to keep that in mind all the time. It is not the time to be overly worried or start doubting, it is the time to say: now more than ever, since a lot of journalist already can't help their happiness about finally having to write something dramatic again after last season seemed more like a stroll through the Bundesliga at times. Augsburg is determined, they need those three points, and one shouldn't underestimate this game, and it is important to be critical- but supporting.

We will have to relinquish Schmelzer whose old injury is causing him trouble again. But we have a strong backup in Löwe who will be an excellent substitute again. Götze and Piszczek are still in question as well, let's hope they will be okey again for the game. 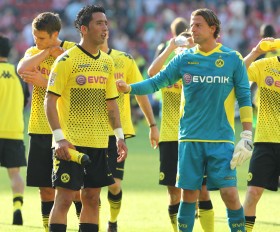 Dear young guns, even though you kind of drove me nuts a few times this season already, I have great faith in you and know that you will give all your best again against Augsburg. Keep those three points at home, we will be there to support you. And whatever happens, we will continue to be there. Forza BVB!